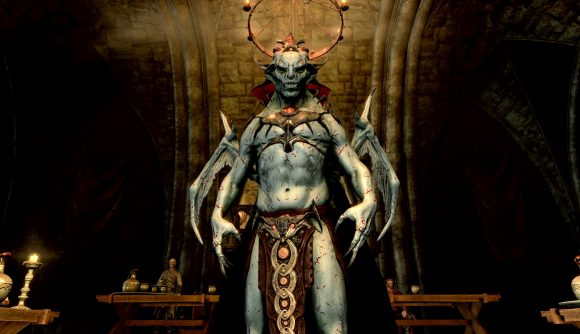 Skyrim: Anniversary Edition is here, and with it, the event that the community has taken to calling the ‘modpocalypse’. An update to Skyrim Special Edition changes the game in such a way that some mods – those which directly interact with the game’s code – would break. The worst of the issues have been averted thanks to early work from the community, but for now there’s still work to be done. Here’s what you need to know to keep your favourite Skyrim mods running.

On PC, Skyrim: Anniversary Edition is a DLC upgrade for Skyrim Special Edition which includes all previously-released Creation Club content. A free update for Special Edition includes some of that content, and makes changes to the base game which render native code mods incompatible.

Skyrim Script Extender, otherwise known as SKSE and required for many mods, has already been updated to work with the Anniversary Edition update. This was the biggest concern players had regarding the incoming ‘modpocalypse’. Creator Extrwi received early access to the Anniversary update from Bethesda, and published a new version of SKSE on Reddit earlier today. “Due to the large amount of manual code rewrite required for this release, the possibility for bugs is higher than usual,” Extrwi says. “That said, things seem to be working better than expected.”

I’ve tested a couple of the most popular SKSE-dependent mods, including RaceMenu and SkyUI, and they seem to be working fine with the updated version of the script extension tool.

SKSE has already been updated again after an early official hotfix re-broke it. To avoid issues with future patches, you’ll want to open Skyrim SE’s Steam properties and disable automatic updates. To avoid pulling unwanted updates, you’ll need to launch Skyrim from outside of Steam, likely with your mod organiser of choice.

All of this only applies to mods that mess with the game’s native code. Standard plugins – I’ve tested the Unofficial SSE Patch and Alternate Start, for example – should have no issues with the update. Mod makers will have to manually update other mods to be compatible, so some older native code mods might be rendered permanently unusable.

Of course, if you’re still rocking the original, non-Special Edition version of Skyrim, you’ll see no update today and thus no issues.