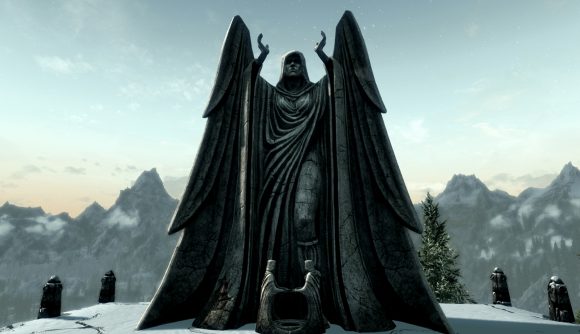 News doesn’t really travel fast in Skyrim, and while people will certainly get mad if you, say, steal their gold and murder their chickens, that reputation doesn’t really travel with you. The Skyrim Reputation mod aims to change that with a much broader system to track how the world feels about you – from your dependability to how far you’ve been tempted by the lure of Daedric power.

Broadly, the mod gives you good and evil morality points across a variety of categories, and weighs positive and negative scores against each other. Whatever score you’ve arrived at is amplified by your fame rating, which then determines your ultimate reputation and how NPCs react to you.

You can grab the download for Skyrim Special Edition over at Nexus Mods, and yes, there’s a vanilla version too. Creator dcyren says it’s broadly compatible with other mods, including a lot of dialogue adjusters, but there are exceptions. Mods that affect quest outcomes can come into conflict with the new rep system here, either cutting off proper completion or failing to properly adjust your standing.

If you’ve longed for Skyrim’s populace to care about more than the fetch quests you’ve done for them, this looks like a very good option.

Related: Add the 100 best Skyrim mods to your game

There’s been plenty of other notable mod news recently – Jeremy Soule has okayed his new album for use in mods, and Beyond Skyrim dev diaries are showing impressive progress for one of the biggest projects in the community. Skyrim’s mod scene certainly isn’t going away anytime soon.