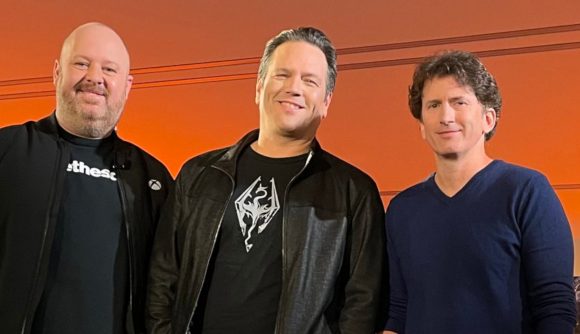 Phil Spencer is going to get a Lifetime Achievement Award from the Academy of Interactive Arts & Sciences. As the Xbox boss, Spencer has already shaken up the industry enough for that award to make sense, and is likely to do a whole lot more before his career comes to a close. The funny bit is that he’s going to receive that award via his own employee: Skyrim magnate Todd Howard.

“Phil Spencer has demonstrated both passion and leadership throughout his entire career at Microsoft. He’s responsible for countless impactful and pivotal initiatives that have reverberated throughout the entire gaming industry,” AIAS president Meggan Scavio says in a press release. “On behalf of the Academy’s board of directors, we are looking forward to celebrating Spencer’s important impact on videogame history by presenting him with our Lifetime Achievement Award.”

The award presentation will be part of the 25th annual DICE Awards, set to stream on Thursday, February 24 at 8pm PST / 11pm EST, or Friday, February 25 at 4am GMT. Todd Howard will present the award to Spencer, and if he doesn’t make an awkward joke about having to hand his boss a prestigious trophy, I don’t know what I’m going to do.

At least Todd has managed to tear himself away from his FFXIV gig, I guess.

Bethesda’s first big game under the Microsoft banner – aside from the ones that aren’t on Xbox, anyway – is due to hit later this year. For more on the Starfield release date, you can follow that link.