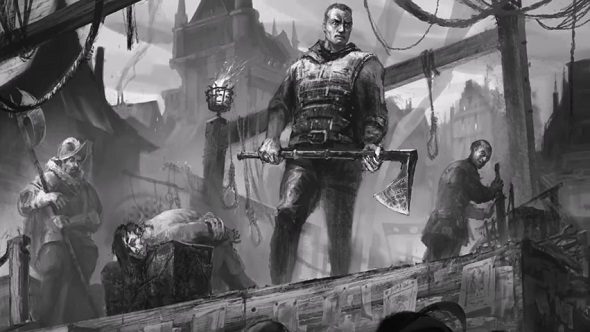 In the majority of games, you’re either in the crowd for the execution or heading for the chopping block, rather than being the person under the executioner’s hood. Well, Lesser Evil Games are putting players in charge of the headsman’s axe, with their horror RPG The Executioner.

For slightly cheerier stories, have a gander at this list of great PC RPGs.

Set in a grimdark fantasy world, The Executioner has players taking the role of a royal executioner and torturer. You are given orders from your employer to extract confessions from people that have been sentenced to death, and then dole out their demise in an appropriate fashion. The judge has their motive and the jury have made their decision; it is up to you to gain a signed confession by any means necessary.

While in the torture chamber, you have many methods of extracting a signature. You can try the feather touch by cross-interrogating or reasoning with your prisoner, or you can go full Spanish Inquisition and treat them to a session on the rack. Each method of torture has an Atrocity level, with players having the option of being as brutal or as merciful as they wish. While your eagerness to gouge out an eye may get a confession, each act of cruelty will chip away at your sanity. It may only take the yanking out a single fingernail to gain a confession from one prisoner, while you may have to chuck the entire torturer’s toolbox at someone else. Time in the torture chamber will really push your morality to its limits, with each session guaranteed to be uncomfortable.

After you’ve gained your confession, it is off to the scaffold for the main event. Much like in the torture chamber, players can choose the level of pain they wish to publicly inflict on their victim. Along with your own sanity and the will of the Crown, you will have to satisfy the bloodlust of the masses with your executions. While a simple hanging may cut it one week, the crowd may call for someone to be drawn and quartered on the next. If you don’t perform to expectation, you may end up being torn apart by the angry crowd.

If you are at all intrigued by the premise, there is a free demo of The Executioner available on its Kickstarter page. Be warned that this is not a pleasant game, being unflinching in its desire to test your moral compass. Lesser Evil Games are currently looking for $19,000 on its Kickstarter, with a tentative November 2017 release date if it reaches its goal.