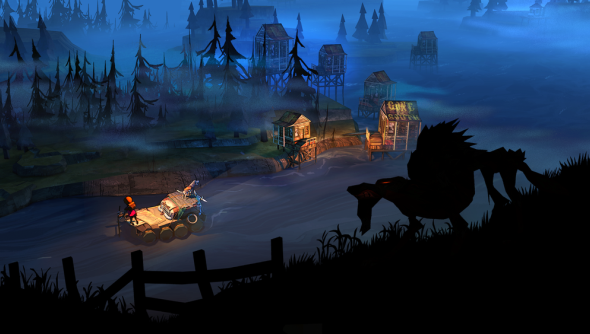 What would you do if Ken Levine called a company-wide meeting to discuss a “winding down”, and you found yourself suddenly jobless?

Six senior Irrational staffers set off downstream by themselves. They’re building a game about survival – a roguelike in which we’ll brave the elements on the waterways of a devastated American South.

Scott Sinclair was art director on BioShock and BioShock Infinite, but had left the series during production of Burial at Sea to pursue his own work. Serendipitously, it was on the day that turned out to be Irrational’s last that he’d agreed to meet Infinite lead level designer Forrest Dowling for lunch. 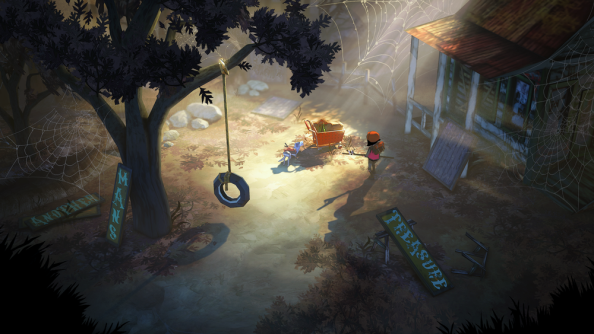 “Hey dude, I’m gonna run a little late,” wrote Dowling in a text that morning. “We’ve got a surprise meeting, not sure what it is.”

After dancing around the idea over food, the two broached the subject of forming a new team. And a couple of months later, they’d recruited one.

As it happened, most other major studios in the Boston area were weathering their own layoff periods. Perhaps for that reason, Dowling and Sinclair were able to persuade a number of experienced colleagues to go off-piste: artists Chad LaClair and Gwen Frey, and onetime Halo 2 and 3 AI lead Damian Isla. They even convinced Bryn Bennett, Irrational tech lead during the Freedom Force era, to quit his job at Harmonix – “on the idea that we would someday make money”. 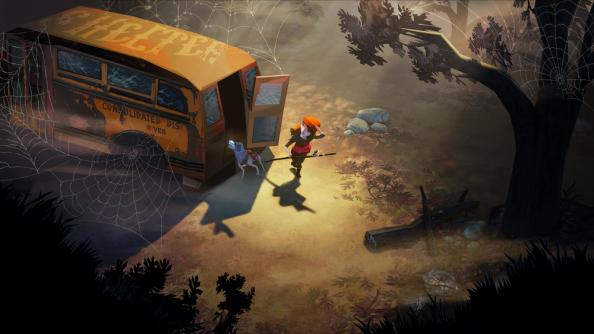 Sinclair had been wanting to make a game about “small worlds” – a visual idea, the kind art directors have, of little places to explore. And Dowling had been daydreaming about making a pared-down survival game.

“I wondered if I could make something that cuts out the zombie stuff and is still interesting,” he said. “A game focused specifically on actual survival, as opposed to surviving many crushing blows to your body from supernatural enemies.”

The two ideas turned out to be compatible: The Flame in the Flood would be a game about traversing a procedurally-generated river, scraping together resources and remedies to help tackle or evade nasty wildlife and worse weather.

It would be the antidote to Infinite’s prolonged development – a small game built in 12 to 18 months in Unreal Engine 4. The engine choice was easy: the team had collectively spent “40 or 50 years” working in previous Unreal Engines. 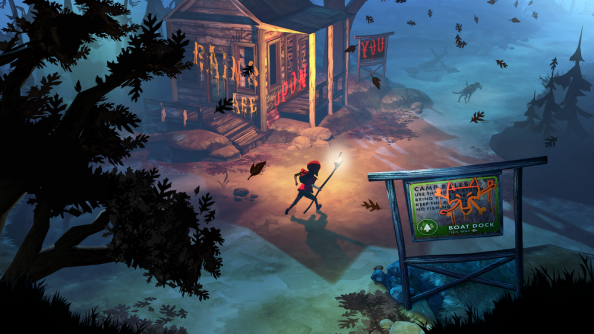 “It’s enabled us to get rolling very fast, and in particular realise our visual ideas very, very quickly,” said Dowling.

The Flame in the Flood’s setting is post-society, though it’s not made clear if it’s also post-apocalyptic. All of the game’s flora and fauna are based on the “things you find out South”, and its characters designed to be representative of the sort of people you might encounter in the American backcountry. The team have taken inspiration from the swampy, sombre and ambiguous environments of Beasts of the Southern Wild.

Sinclair grew up on the banks of a Floridian river. His art direction on the project is very particular – polygonal but not retro, whimsical but unflinching.

“In terms of the polygon count and whatnot, this game could for the most part almost run on a PlayStation 2,” said Dowling. “We have hand-painted textures on everything, but with a really low-poly, faceted world. 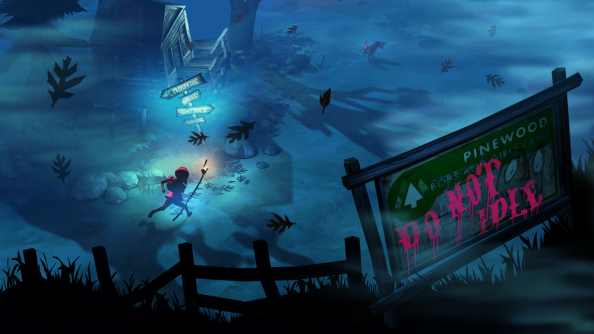 “Part of that is that it’s an interesting aesthetic, but also it’s a very doable aesthetic for a small team. Just the assets you find on a desk in The Order: 1886 would probably take a team our size two years to make.”

But The Flame in the Flood also makes use of some very contemporary tech – fancy particles, post-processing and lens effects, all in aid of atmosphere.

When the team discuss an in-game event, Sinclair often asks: “What’s the illustration of that?” In other words: “How are we going to represent this in a way that clearly expresses what it means for the player?”

The results, some of which can be seen in the trailer, can be quite extreme. If the player’s raft collides with a rock, the camera shudders in kind. If the player gets wet, the screen takes on a blueish, watery hue.

But all this impact is for a practical purpose. In a survival game founded on real-life references – in which death comes to those who fail to stay warm, dry and healthy – you’re going to want to know precisely what’s happening to you.

A river, it turns out, is the perfect foil for a procedurally-generated roguelike. Winding and unpredictable, it’s given its developers the excuse they needed to put together a system that builds levels just as the player reaches them. When your boat pulls into a jetty, code is turning a flat geometric plane into an island of rabbit burrows, buildings, herbs and collectables. And then, as the current carries you on, that level is trashed – a pop-up place experienced by you alone, never to be revisited.

The other thing about rivers is that they end. Just as FTL has its capital ship and Spelunky its temple, The Flame in the Flood has a final act for those players capable enough to reach it. 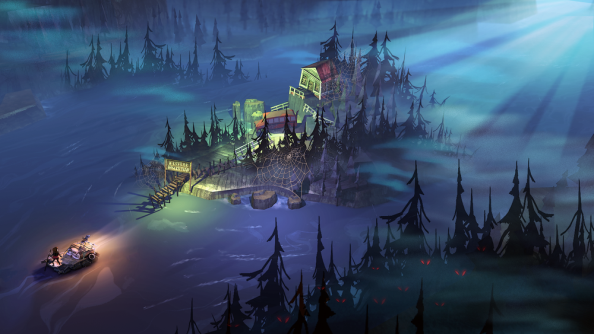 “I like to have purpose when I’m playing a game,” said Dowling. “I don’t think there’s anything wrong with an endless sandbox, but you make the game you want to play. I like games I can beat.”

For all the lessons this team of industry grandparents have clearly taken from the new genres crowding Steam’s top sellers list, their values were learned at Irrational.

“I like there to be, at the core of everything you do, something that feels human and relatable about it,” said Dowling. “Human stories that map to basic desires and needs and wants are some of the most potent motivators out there.”

The Flame in the Flood is in development for PC and Mac.Unreal Engine 4 development is now free.

In this sponsored series, we’re looking at how game developers are taking advantage of Unreal Engine 4 to create a new generation of PC games. With thanks to Epic Games and The Molasses Flood.