Playing With Myself is a new series where I faff around in a newly launched or Early Access game for under an hour, and you watch me do all of this faffing on the ol’ YouTube. Then, if you fancy it, you can take a gander at my written impressions. It’s a Let’s Play and an impressions piece stiched together like Frankenstein’s monster. Also, it has a slightly rude title. Hooray!

I am being stalked by death, a hunter whose name is mother nature. She’s terrible and inescapable. Where survival games are often filled with supernatural or psychopathic antagonists, The Long Dark pits survivalists against the environment and the completely regular beasts that roam it.

It’s lonely, gorgeous and infinitely more threatening than a world filled with zombies.

My first death at the jaws of a wolf who had made a hydroelectric plant its den left me nervous, my nerves frayed. The Long Dark’s beautiful art style welcomes players, but those massive trees and gargantuan, distant mountain peaks are no comfort when starvation and frostbite sets in.

Little noises make me jump and turn around in a panic. Is that the howl of a wolf? Are those footsteps behind me or just the wind? This isn’t a horror survival game, but little by little I did start to become horrified anyway.

It might just be due to the early state of the game, which is in alpha and only contains a sandbox mode, but there’s a purity to The Long Dark’s brand of survival. It’s all about the basics: food, water and shelter. And those things are all fleeting.

That moment of elation when stumbling across a warm cabin with a stove is soon replaced by the horrible realisation that remaining within the safety of the building is simply not possible because I’ve run out of food and drink. So it’s back out into the frigid wilderness I go, where wolves prowl and the wind howls.

Fires die out, clothes get damaged, food and drink provide temporary nourishment but it’s never enough. The temporary nature of everything that assists in survival is devastating, and the wilderness starts to grow into an obstacle that doesn’t seem possible to overcome.

The Long Dark feels contrary to most survival games, because there’s very little empowerment. There are no forts to build, violence isn’t all that common – or at least wasn’t in my three or four lives – and even when more helpful tools are discovered, they degrade and eventually become useless without even more tools to repair them. 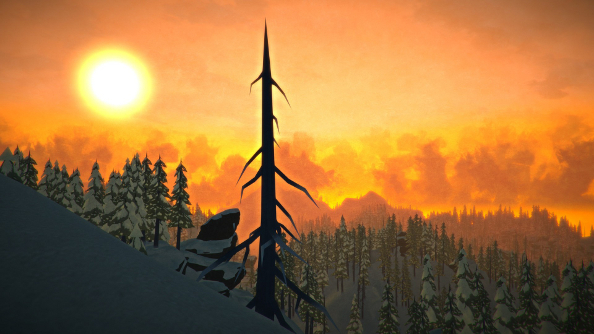 And this isn’t a complaint. While I love the sense of progression one gets in The Forest or DayZ, the feeling of utter helplessness that pervades The Long Dark is refreshing, even if it is terribly exhausting. It’s a game that works its magic using the mundane. The last moments of the above video demonstrate this perfectly.

I’ve hit a dead end, and the wind and freezing cold are slowly killing me. I can’t build a fire because there’s no shelter, and a wolf is stalking me. I am mere minutes away from the sanctuary of a cabin, but I don’t feel remotely safe. My character’s breathing is heavy, she’s freaking out because she’s so cold, and as I try to run back to the warm embrace of the big log cabin, it’s starting to make me freak out a bit too. It’s an understated and subtle terror, but one that’s just as powerful as the spectacle of being chased by cannibals or surrounded by zombies.

But it’s loneliness that wore me down the most. The detritus of civilization is tucked away in cabins, but the only humans I actually meet are corpses. Who are they? How did they die? Deserted buildings, empty campsites, solitary backpacks found buried in the snow – it makes one feel like the last living human being in the world.

Once, when I was a teenager, I got lost while on a solo cycling trip. I went off the beaten track and was caught completely unprepared when it started to get dark. It got quite cold, and I didn’t have much food. I knew that I wasn’t that far from where I was meant to be, but I had no way to know exactly where that was. I was angry with myself, but more than that, I felt alone and vulnerable. That’s how I felt while playing The Long Dark. But it’s colder and there are wolves waiting to attack.