After the card gaming boom that followed Hearthstone’s rapid rise in popularity it felt like every publisher and their office pet was rushing to turn their popular license into a free-to-play CCG.

Into your card battlers? Check out our list of the best card games on PC.

Jagex had a go with Chronicle: Runescape Legends, while CD Projekt Red and Bethesda found success with Gwent: The Witcher Card Game and Elder Scrolls: Legends respectively. The fact that Valve’s first new game in five years is a CCG based on Dota 2 speaks volumes about what is driving the genre.

But the constant pressure to buy card packs in order to stay on top of a game’s PvP meta is becoming a drain on players’ wallets and patience alike.

As this is a ‘living’ card game, Fantasy Flight Interactive and Asmodee Digital are promising card and campaign expansions, but instead of blind-buy card packs with rarity levels, you will be able to purchase preset packs and individual cards. This means you will know exactly what you are getting for your money, alongside the promise of no duplicates. To draw you in a little deeper, The Lord of the Rings Living Card Game also has a free-to-play currency called Valor Points, which can be earned through gameplay and spent on Valor cards, Hero Packs, and new quests, thus incentivising numerous playthroughs on different difficulty levels.

All of this should be a breath of fresh air for anyone who has dropped money on random packs in the hope of securing one of potentially hundreds of cards. But the lack of a competitive scene is also a boon for those burnt out on fine-tuning the same decks over and over again. Owing to the predictability of AI enemies, the decks you build in The Lord of the Rings Living Card Game do not have to be perfect in order to work, encouraging you to experiment with every deck type available in order to beat all the available campaigns.

Crucially, if the business model behind The Lord of the Rings Living Card Game is to sustain the game, it will have to be fun to play. And in that respect a hands-off demo is hard to go by, but it is all I have. Sorry… Certainly, the richness of Tolkien’s world is present in Fantasy Flight Interactive’s LCG, with lavishly designed boards setting the scene for each new encounter and the same soft, luminous card art from its tabletop progenitor. Hearthstone’s influence can be felt in its UI and board design, but that delicate style exists in sharp contrast to the gameplay – expect to have your posterior handed to you many times as you quest across Middle-earth. 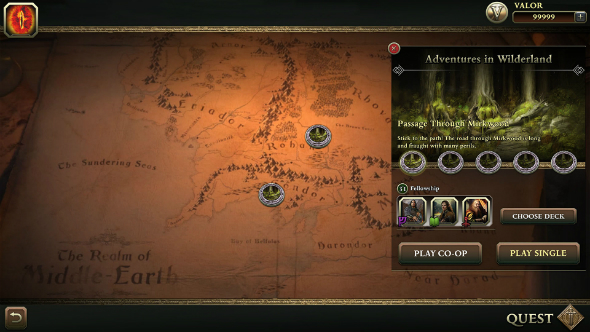 The developer showing the build off to me played every card just as I would have and ended up scraping through the final boss fight of the adventure with only a slither of health left. Instead of a face card, The Lord of the Rings LCG spreads your total health across three hero cards, which you build your decks around – effectively, your role is to guide your own fellowship through each adventure. Having all of your hit points in play adds a dimension of vulnerability to everything that happens, and with stats that carry over between each quest in an adventure, keeping all three heroes alive until the final stage becomes a feat by itself.

As each stage is a quest you cannot just clear the board and move on. Instead, you have to complete a specific task before you can progress, which is much simpler than it sounds. On one board, we had to cast a spell in order to open a Forest Gate – all we actually had to do was forfeit our heroes’ chance to attack for a turn and, instead, use their Willpower stat to whittle down the quest’s cost to nil. Quests complicate matters a great deal. Do you rush to complete the quest and tank a few free hits in the process? Incur minimal damage by playing it safe and clear the board as efficiently as possible? Or risk even more by going after a side-quest for the reward it will grant you?

A couple of mechanics limit how often and successfully you can rush through the objectives, stopping you from creating high Willpower decks and sprinting to the adventure’s final battle. Pursuit, for example, is a trait carried by some enemy minions that has them follow you to the next board if you do not kill them before travelling onwards. Even without Pursuit cards in play, you will want to avoid travelling with enemies left on the board due to Threat, a stat that conveys how aware Sauron is of the fellowship’s actions. You start with roughly 30 Threat (around ten for each hero in play) and if it reaches 50 then it is game over. Leaving enemies behind as you travel will increase Threat, but certain enemy cards can also increase this level, making it very easy to lose this way if you play too recklessly. 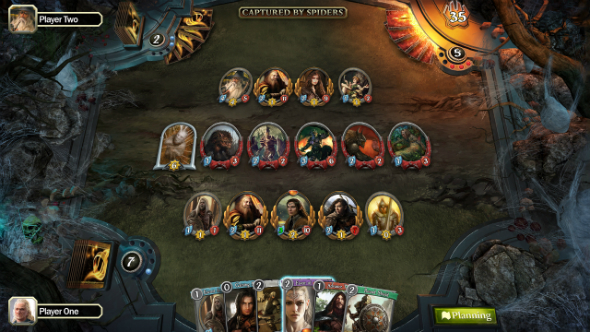 Deck building adheres to the Goldilocks principle: not too simple, not too complicated, don’t eat anyone else’s porridge. You build your decks around your chosen heroes and their Spheres of Power: Lore, Tactics, Spirit, and Leadership. So if your fellowship is made up of Aragorn (Leadership), Gimli (Tactics), and Legolas (Tactics) then you will be able to build your deck with cards from those Spheres, not to mention Neutral cards that can bulk out any deck. Spheres have ranks as well, which means you will need to ditch Aragorn and bring along a third hero from Tactics Sphere, such as Boromir, if you want access to the top-tier Tactics cards.

The hands-off demo was enough to whet my appetite, but it is never easy to grasp the full extent of card game mechanics until you can hop in for yourself and start experimenting with decks and strategies. What I can say is that the PvE focus and pricing structure of The Lord of the Rings Living Card Game are exactly what I want from a card game right now. It makes for something I can drop in and out of at my leisure or embrace with both hands. More importantly, it means there is no-one around to troll me with sarcastic emotes or crush my dreams with decks that cost a small fortune to acquire.

The Lord of the Rings Living Card Game is due to release in Early Access this year, so if any of that sounds appealing to you, keep an eye on their Steam page. Otherwise, you can let us know what you make of the upcoming LCG in the comments below.