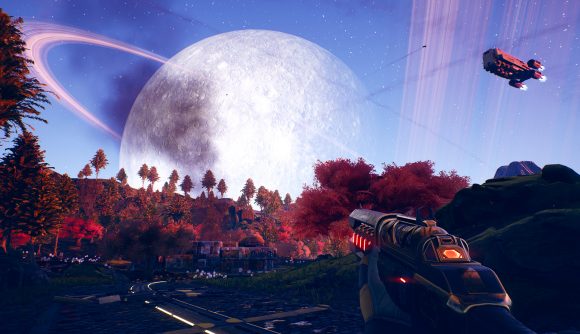 Although there are certainly people enjoying it, Fallout 76 hasn’t been the game most series fans were hoping for. Last week, Obsidian announced The Outer Worlds – a game from some of Fallout’s original creators that looks to follow up on the studio’s own beloved New Vegas. As you might expect, Fallout fans are excited to talk about it. So excited that mods of the main Fallout subreddit have had to ban discussion of the technically unrelated game.

An announcement was pinned to the top of the subreddit last week titled “Outer Worlds is not directly related to Fallout.” In the message, mods notes that “the original creators being involved does not make it directly related to Fallout,” and provide a link to the actual Outer Worlds subreddit. Naturally, discussion of other games is allowed in the comments – the mods just want new posts about Obsidian’s game to stop.

The top comment on that thread sums up the tone of most of the replies: “we just want something good to talk about.” Whether The Outer Worlds is “something good” remains to be seen, but Obsidian is certainly sending the right messages to a community that’s been disappointed with Bethesda’s recent output.

If you do want to discuss The Outer Worlds, there is a subreddit for that.

There’s still room for Fallout 76 to be a great game, but – as noted in our review – it’s not there yet. Meanwhile, early Outer Worlds gameplay footage suggests it will be the New Vegas successor fans have been waiting for. Whether either game can deliver on its promise is still up in the air, but The Outer Worlds at least has the benefit of a good first impression.