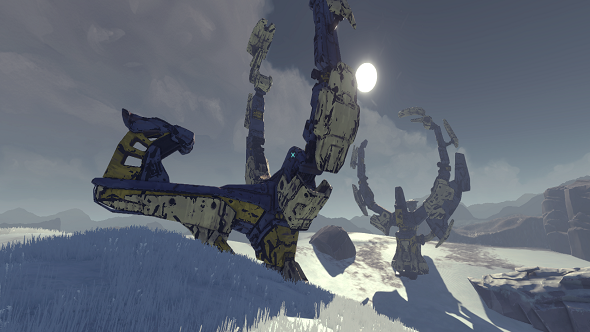 In a post on Steam just yesterday, the folks behind The Signal From Tölva told the community about a few things recently added to the game, and teased a major announcement: the game is getting a free expansion later this year.

For more PC games to look forward to, use our list of the top upcoming PC games to find something up your street.

The other additions seem almost irrelevant in comparison: there’s a new secret area to discover, with high value loot, and a new module that allows you to call in drones during a battle, like some sort of drone sorcerer.

The expansion, though, is what should get people excited. It has a new setting, first of all: a much more snowy landscape, rather than the plains the rest of the game takes place in. On top of that, it promises to add “a few more hours of combat and exploration” on the surface of Tölva, with new secrets to find and robots to interact with. Or kill. Probably kill.

Afterwards, the team say they’ll look into further expansions, how they want to go about making and releasing that, and so on. Watch this space, then: if there’s a positive reaction to The Signal From Tölva’s expansion, there may be a lot more of Tölva to explore in a year’s time. The announcement can be read in full right here.