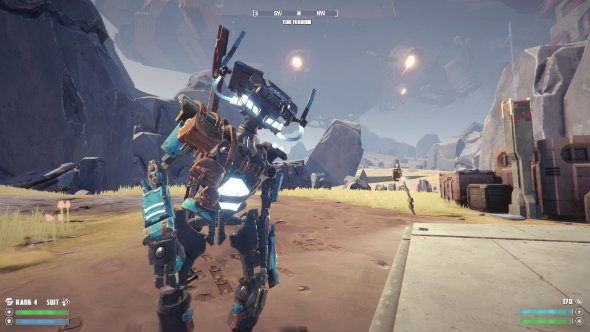 Big Robot have just revealed their next game after Sir, You Are Being Hunted. The Signal From Tölva is an open-world exploration and combat game that ditches the procedural worlds of Sir for a hand-crafted environment full of warring robot factions.

That’s another one for the upcoming PC games list.

It seems like a completely different prospect to Sir, with combat at the fore and the ability to recruit and build your own robot army a far cry from the survival mechanics of Big Robot’s debut.

“In the distant future, star-faring robotic factions sift through the ruins of an ancient civilisation. On the highlands of Tölva, beneath the shadow of abandoned war machines, they found something,” says the official blurb.

“Was it the source of the signal you were so interested in? And will the trail lead to enlightenment, or something more sinister? You hijack a drone and you begin the search for yourself.

“The Signal From Tölva is a journey into a wild science fiction landscape, filled with danger and beauty: you must survive terrible hazards, navigate through impossible spaces, and fight an ongoing battle to control this haunted, blighted world. You will make use of a range of powerful tools to overcome your enemies and uncover secrets: hack robots to battle alongside you, equip powerful weapons, and detonate savage defence systems.

Fight, explore, and solve the mystery of The Signal From Tölva.”

It sounds like it could be cool, but just so you’re aware, I have written for a website co-owned by one of the developers a total of three times, so I might be a gigantic shill.So don’t just take my word for it, watch the trailer instead and use your brain to interpret the moving images.