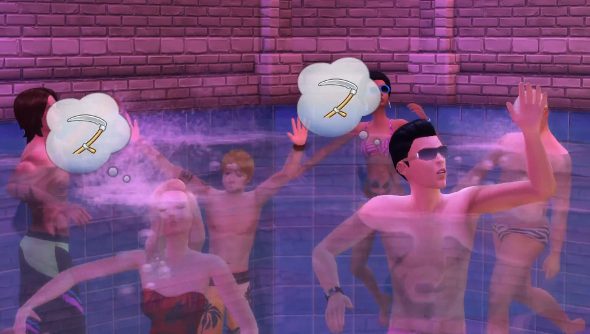 When Maxis revealed that there would be a pool-shaped gap in The Sims 4, there was much sadness. Indeed, the tears from pool-lovers everywhere could have filled several hundred Olympic-sized swimming pools.

That dry period is now over, though and our poor Sims can now cool themselves off in their new pools.

It’s not just bog standard pools that you can slap onto your Sims’ homes. Pools can be constructed on any level and in all manner of shapes. Fancy a glass-bottom pool dangling off the side of your mansion? How about a moat for your out-of-place castle?

These are all silly questions. The first thing you’ll all do is build a regular pool, fill it with people and then remove any means of escape. But it’s okay, because with last month’s ghost update, you’re not really murdering anyone. You’re just transforming them into colourful, transparent house guests.

The pool update also comes with a big patch that adds swimming costumes (and new styled looks), performance tweaks and bug fixes. Take a look at the next page for the full patch notes.