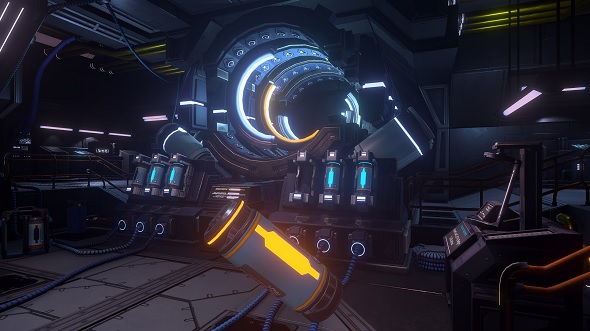 Could you hop onto a space station, break through the locked doors, and find out what happened to the crew after they approached an alien civilisation? Not too much to ask, is it?

Oh, and what you discover might challenge your views on surveillance, imperialism, and moral law. If that’s something you want to do then make sure to check out The Station – you could win a Steam key for it below.

Need something to play right now? Check out our big list of the best free Steam games.

The Station is a first-person puzzle game that wants to you think big. Not just in terms of how you solve its puzzles but in how its story and themes touch on epistimological debate. It starts with you, a recon specialist, boarding the titular space station after its three-person crew has become uncontactable. You have to find out what happened to them.

You explore the station, examining every object to piece together the clues, interacting with AR logs the crew left behind. The idea is that the story itself is as much of a puzzle as the problems you have to solve to navigate the entirety of the facility.

What we can tell you for now is that the crew on the station discovered a sentient alien civilisation that was in civil war. They went in to try to bring a peaceful resolution to that war, hoping that, in doing so, this advanced race would be able to help humanity rethink the sciences and further us as a species.

By unravelling the mystery of the missing crew you will be party to determining the fate of both civilisations – the aliens and humanity. Intriguing, no?

If you want to find out more about The Station then the best way to do that is buy the game on Steam and play it for yourself. Alternatively, you could enter our giveaway and hope to win one of the 20 Steam keys we have for the game. You can do that by using the widget below.