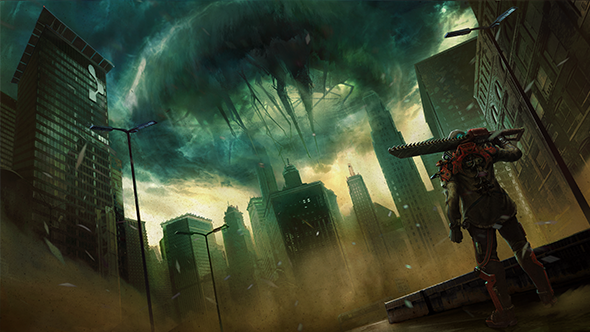 In a move that should not surprise fans of the original game, Deck 13 has announced that it is working on The Surge 2. While the team are not ready to show off the game in action they were willing to tell us all about what they are bringing to the sequel.

The Surge 2 sees you return to the dystopian future of an Earth going through ecological collapse. Once again, you will slip into an exosuit and carve your way through crowds of rage-filled survivors. As in the first game, should any of those survivors be carrying a weapon that catches your fancy then you can cut off the limb and fit it to your own suit.

While Deck13 is only giving a vague 2019 for The Surge 2’s release date, Hetenyi did say that the team will “be at the major game shows this year, E3, Gamescom, all that stuff and we’ll have some pretty cool things to show.”

Into character stats and inventory screens? Check out the best RPGs on PC.

The Surge 2 setting is a city tearing itself apart

The Surge takes place in a world in the middle of an ecological collapse. Rivers are drying out, pollution is killing off wildlife, and humanity is concentrated in cities that are scrabbling for the resources to survive. The corporation you worked for in the first game, CREO, were trying to restore the planet by firing rockets full of nanobots into the atmosphere. Spoilers: it didn’t work. Worse still, the nanobots drove most the world’s mechanically-enhanced humans on a rampage.

All the action of the first game was contained in a CREO-owned industrial complex. But the sequel moves the action over to a city that is dealing with the crisis brought on by the nanobots. Everyone is trying to kill each other.

“Once again, this is a story about survival but this time we’re not in the aftermath finding out what happened, we’re right in the middle of events trying to survive,” Deck13’s managing director Jan Klose tells us. “The play area is much more alive.”

Using newly-developed technology and the new setting, Deck13 is making a layered environment. “The levels are built in [a] very different way with many more layers and many more connections,” Klose says. “The whole setup is very different. To the extent that we had to redesign our engine a bit.”

A problem with designing levels in The Surge was “there were bits where you didn’t really know what your mission was,” according to Klose, so you would just wander forwards until you came across an objective. The team want to fix that in the sequel. You should always have a clear idea of what your mission is and where you need to travel to in the city to complete it, but the team also want you to find distractions along the way – “So you might go off the beaten path and find more things that you’re not really meant to do now but you want to take them on anyway.” 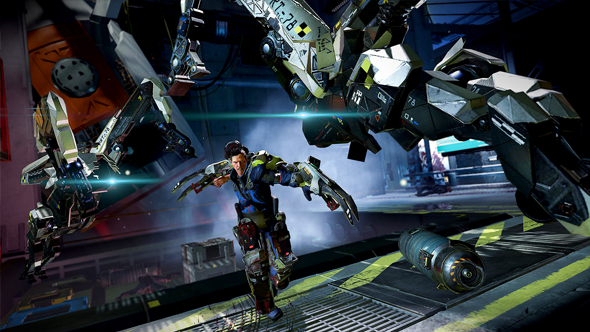 An aspect of the original game that the team plan on expanding in The Surge 2 is enemy behaviour. “Enemies will have advanced AI,” chief designer Adam Hetenyi says. “They’re able to adapt better to what you’re doing, behave more interestingly in groups, not to the point that they’re reading your mind but the idea that there are more layers of behaviour for you to learn and master and anticipate.”

An enemy type you will find in the new city environment are survivors who don’t have exo-suits. They have not been affected by the nanobots but “they want to take your stuff, they’re envious but they’re individually less strong than you are so they have to behave in a way that still makes them challenging,” Hetenyi explains. “They can group together and set up ambushes. Or, if the group starts to decay, then they’ll attempt to find another group and come back with them.” It is this push and pull of enemies reacting to you that we will see a lot more of in The Surge 2.

The AI will take advantage of the newly-layered playspace, too. “They can do really interesting things in terms of changing height levels to avoid and ambush you,” Hetenyi says. “It’s not just them spawning behind a corner to jump out at you, they’re reacting to your movement through the world.”

Larger enemies, too, will behave differently. “Robot enemies aren’t just going to fall over dead when you chop something off them, they’re going to change their behaviour,” Hetenyi says. “Remove a cannon from their body, they won’t use the cannon anymore [but they’re still a threat]. Maybe you smash some armour plating and expose a weak point on them but [respond by going] berserk.”

Hetenyi explains this is all “part of a new sort of ceiling to mastery.” You don’t have to learn enemy behaviour to get through The Surge 2, but it will allow you to better predict how an enemy will attack if you do.

“You can engage with it as much or as little as you want to,” Hetenyi says.

The Surge 2 combat is expanding with new moves to master 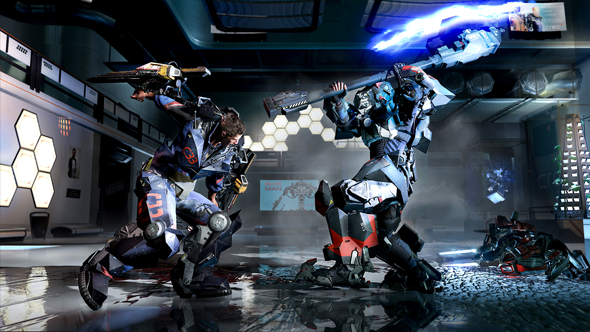 Deck13 is giving you a string of new moves that have a big pay-off when executed well but, if not, can leave you in the dust.

An example of this that Hetenyi gives is a hard parry: “If you’re in heavy gear then you can hard parry an enemy’s directional attack, pushing an attack away and cracking open their defences.” You could have simply dodged the attack but by staying in danger to parry the attack you’re rewarded with an opportunity to hit the enemy in the gizzards.

The team want to reward that kind of risk taking because it gives you a reason to master the movements of their enemies.

The Surge 2 drone system is being rebuilt

While largely a solo experience, you have one friend in The Surge and its sequel – a loyal drone that follows you around and jabs your enemies when they’re not looking.

Deck13 found that people didn’t use it all that much in the first game – “or they only used one or two modules, like the shock module, not a lot else,” Hetenyi says. In The Surge 2 the team are giving the drone “a more central role.”

In the same way you can cut off melee weapons from enemies for your own use, in The Surge 2 you can now cut off ranged weapons and fit them to your drone. Hetenyi says this can lead to “interesting combat manoeuvres.” You can, for instance, use the drone to bridge your combos between enemies or disrupt one enemy while you are trying to focus on another. Or, for cowards like me, if you are facing a heavily guarded enemy you can send it to shoot them in the back, breaking their defence. 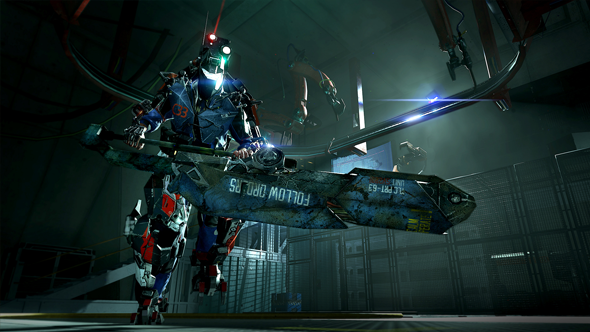 Most of the armour and weaponry you amassed in The Surge was repurposed industrial equipment. You weren’t playing in a war, after all, but picking your way through a series of factories and labs.

Deck13 is taking the opportunity that comes with moving the action to the city to widen what is available to you. There will still be some industrial equipment, but you will also find “garage-built, welded together stuff people are using to survive in this hazardous, radioactive environment,” Hetenyi says. At the other end of the spectrum, the team are stuffing the game with high-tech, military-grade weaponry, too.

“We wanted upgraded gear to not just be ‘Oh your DPS goes up’ but actually add effects to different combat moves,” Hetenyi says.

All these additions – drone abilities, combat moves, and gear grades – are intended to give you enough customisation options to define your character.

“I didn’t even mention implants,” Hetenyi says. “There are lots and lots of implants that you can rebuild and find combinations of to emphasise certain behaviour or shore up certain weaknesses. We want people to experiment with this stuff and find what works for them.”

Unlike the first game, in which you played a particular character called Warren, in The Surge 2 you will be allowed to design your on-screen persona with a character creator. Not only will it allow you to pick your gender and appearance, you will also be able decide which kind of playstyle you would like to start the game kitted out for.

“Do you want to play more stealthy, sneaky for the first parts of the game?,” Klose asks. “Or do you want to go more tanky, bulky? You’re not bound to that but you can start the game with the playstyle you like most when you play such games. Then you can mix and match all that stuff with things you find later.”

Part of the reason you are free to pick your starting gear is because The Surge 2’s difficulty is much more flexible than the first game’s. Not in that you set a difficulty level, but in how you decide to approach challenges.

“We had people who played the first game that really liked the difficulty curve,” Klose says, “but other players said ‘I started the game, I liked it, and then came this boss and I felt I was running against a wall’.” At which point those players put the game down and walked away.

The idea for The Surge 2 is about “giving you options,” Klose continues. “When you approach an enemy that appears too hard for you, you can go somewhere else or find other stuff, take on other missions, expand your skills in some ways and come back when you’re stronger.”

Klose even suggests simply grinding an area until you find better gear. “That’s the idea behind everything we’re doing,” Klose says. “We think it makes the game much richer than the first one.” 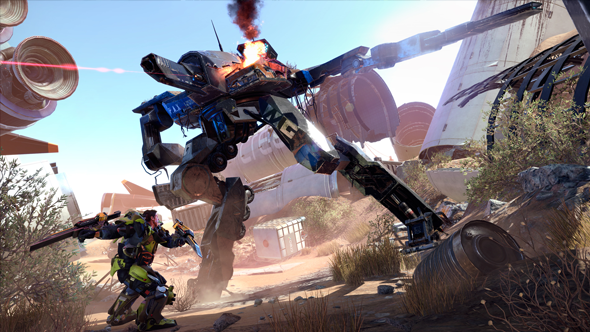 A particular part of The Surge’s difficulty was the game’s bosses and they, too, are being revised in the sequel.

The first major boss of the first game – a military robot called P.A.X. – was a significant challenge to new players. Not only was it heavily armed and armoured, to defeat it you had to discover how to make it injure itself with a rocket strike.

Hetenyi admits this is something the team is addressing in the sequel: “These sorts of things are really cool as elements of a boss fight but when it’s the central element it becomes way too much. You either did the thing or you didn’t do the thing, which means you either killed the boss or you failed. This is something we’re trying to smooth out.”

Boss fights will still have those unique mechanics, Hetenyi says, but they “won’t feel cheap.”

Do not go away thinking that this means there won’t be as many bosses in The Surge 2. In fact, “we’re going to have more boss encounters,” Hetenyi says. “We’re going to have more boss encounters that are varying sizes and levels of complexity. It’s not like you’re clearing area, clearing area, clearing area, BOSS. We want different levels of difficulty and challenge, bosses you can skip all together. Every level will have a big awesome end of level boss that will demand the most from you but these interstitial encounters let the player learn what is expected from them in the game.

“It’s not just that brick wall sort of feeling that generates bad emotions, even if you do feel relief when you win. Being happy you’re done is not the same as pride in defeating something.”