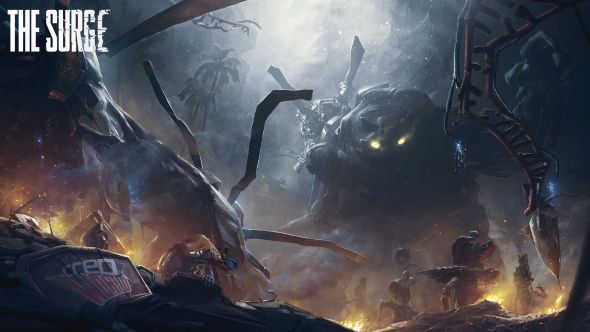 Deck 13 Interactive announced today that their sci-fi spin on the Dark Souls series is getting a hefty chunk of DLC this year. Set in an amusement park that’s directly attached to the Creo mega-factory the main game is set in, the upcoming expansion is called A Walk in the Park, which is funny because it will be anything but that.

Struggling with the game? Check out our comprehensive The Surge combat guide.

Due out this year, A Walk in the Park will open up a new area of the Creo facility for players to explore, earn gear from, and die in countless times over. The DLC will last roughly four hours and will round out some of the base game’s trickier sections so that jumps in difficulty are less jarring. There will be two access points to the park, one as players enter the Production Line area near close to the start of the game, and a second access point much later on near the Research and Development area. The intention is that these new areas will ease players through the game’s considerable difficulty spikes, while giving veterans of The Surge new areas to explore, stories to uncover, and gear to acquire.

At the centre of A Walk in the Park is one of the lightest and most loved elements of the the main game: Iron Maus. In the DLC, players will take on Carbon Cat, the arch nemesis of in-game comic book hero Iron Maus – like any self-respecting arch nemesis, Carbon Cat is a cigar-smoking robot who loves air pollution. Seeing as the DLC is set in an amusement park, we’re expecting an animatronic monstrosity. The additional area will end with a boss fight, although it’s not clear if this will be the only boss fight in the DLC.

The upcoming DLC will also launch alongside a free weapon pack that will add new attacking options to the game. Couple this with all the new armour, implants, and weapons you’ll literally be tearing from your enemies and there could be plenty of new potential builds for The Surge players to try out when A Walk in the Park releases later this year.