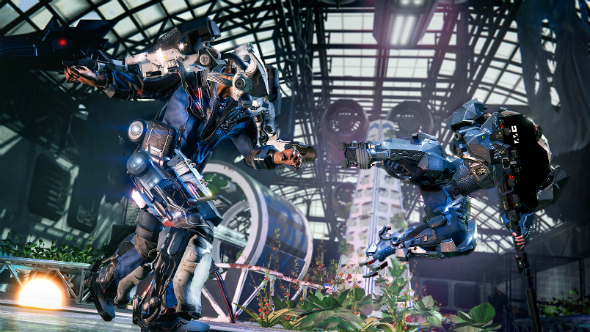 The more I play of The Surge, the harder it is to put down the controller. Even after six straight hours of hands-on time with the review build of the game, I can’t tear myself away from the action. There’s always one more enemy in dire need of decapitating, one more shortcut pleading to be discovered, one more piece of armour to craft, one more boss to conquer, and one more death to show me how. It turns out that Deck13 Interactive aren’t just trying to emulate the success of From Software’s Souls series, they’re going one further and trying to top it. The result? The Surge is not only a seismic improvement over Lords of the Fallen, it’s good enough to compete with one of the most revered gaming franchises in recent history.

Just interested in the finishing moves, weapons and boss fights? Check out our The Surge combat guide.

I start the demo in the game’s second area and immediately get access to a drone that can be summoned at will to attack targets and draw their attention. Soon after I’m presented with a perfect opportunity to test it out: two imposing enemies I haven’t encountered before, stood right next to each other in a very tight space. My Souls senses kick in and I summon my drone to attack one of them, who dutifully gives chase. Smugly, I dance out of the way of his first charged slam attacks and respond with a slash of my own that does a decent amount of damage to its unarmoured limb. A quick jab from it’s cattle prod-like staff nearly catches me off guard and I leap backwards to reassess. Then it stuns me with a shoulder-mounted taser that keeps me in place as it winds up an almighty swing that kills me in a single hit. I grin from ear to ear and the dev watching over my shoulder walks off laughing. 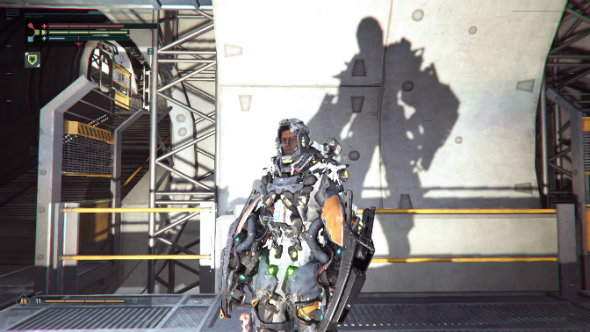 It was no coincidence that the first real chance I had to test out the drone was a death trap – someone at Deck13 Interactive wanted to make a point. The Surge is no Dark Souls-lite: it’s cruel, punishing and will make you regret every moment you foolishly think you’ve got things under control. After another 15 attempts at the two guards I give up. By this point I’ve also killed a lone enemy between my spawn point – a Medbay rather than a bonfire – and the two guards 15 times without incidence. However, as I go to kill him for the sixteenth time I fail completely and die in two swings of his giant hammer; all the Tech Scraps I had accumulated from killing him before were now lost. I had switched off, so I deserved to die, and because I hadn’t bothered to head back to the nearest Medbay and bank my Tech Scraps I deserved to lose those too.

Fortunately, The Surge has a few tricks to alleviate its more masochistic components. For example, weapon classes have proficiency levels that increase the more you use weapons of that type, allowing you to specialise in one-handed weapons, staves, two-handed weapons or dual wielded tools like gauntlets. Within each class you’ll find plenty of options, each with its own strengths, weaknesses, proficiency scaling and attack patterns, and because you don’t scale with individual weapons there’s nothing holding you back from experimenting within each weapon type. Similarly, you can upgrade individual weapons allowing you to either eke the most damage out of your best gear or buff a weapon from a class you don’t ordinarily use so that it’s not woefully underpowered. 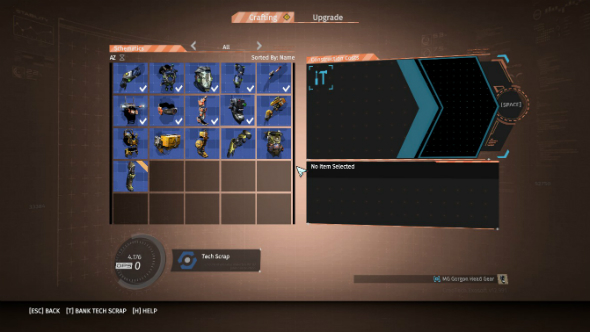 The Surge has one of the best and most satisfying crafting mechanics I’ve ever come across, and it’s no surprise that it’s been placed at the forefront of The Surge’s extensive marketing efforts: it’s bloody good fun. In order to get your enemies gear, you have to target the limb it’s attached to, whale away at it until you’ve built up plenty of energy, and then lop it off with a cinematic, slow-motion finisher. You’ll then have to go back to the nearest Medbay and use the Gear Assembly machine to craft it, provided of course you’ve got enough Tech Scraps and the right components to make it. Those components, thankfully, are pretty basic: weapons, legs, arms, torsos and heads are each made of one component. Short of a few cortical processors? Get back out there and focus on beheading. Components are also tiered from one to four, with the first level allowing you to craft and upgrade the corresponding armour piece while subsequent tiers allow further upgrades. It’s simple enough so that you always know what and how to get the components you need, but the fact that it’s always easier to attack an unarmoured limb constantly forces the decision upon the player. I died a shameful number of times because I got greedy trying to seize a limb when I should have just settled for an easy kill. It’s an immensely satisfying means of self-improvement.

Two hours flew by exploring the game’s second area – a sprawling industrial facility that looked as if it had been ripped straight out of a Neill Blomkamp movie – and I was still spawning at the same Medbay. Significant progress has been made in the form of three shortcuts, some of which had been cheekily hidden in plain sight behind breakable boxes; another middle finger to my expectations. I’d lost untold thousands of Tech Scraps, met a number of NPCs with side quests for me to complete and encountered five new enemy types, including a robotic dog-like creation that would become the bane of my existence over the next few hours. The difficulty had spiked considerably from the game’s first area, and continued to arc upwards. All that was missing was a boss fight to cap it all off, but my first taste of The Surge’s boss fights – against a giant sword-wielding mech called P.A.X. – a couple of months prior had left me sceptical about their quality, polish and scale. 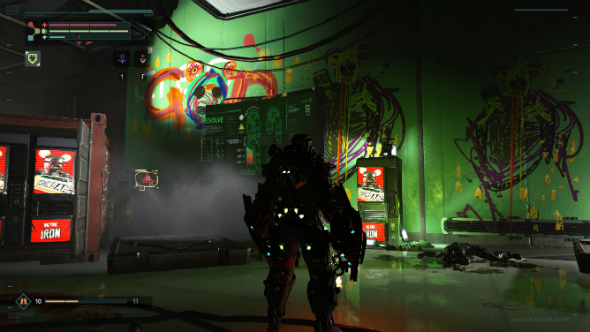 I shouldn’t have worried. Within seconds of stepping over the arena’s threshold a colossal, eight-limbed drone descends from the ceiling and stomps me into oblivion while I’m still trying to figure out what it’s pre-event purpose would have been and why it’s called Firebug. The second attempt goes a little better, I manage to remove a couple of its limbs before it begins a spinning attack, backing me into a corner and killing me instantly. On my third attempt I reduce it to half of its limbs and a fully diminished health bar. The drone falls to the ground, flinging me across the room. I know it’s not over though, and sure enough the health bar refills, the music starts up again and Firebug’s thrusters go into overdrive, spewing out flames that I’m eager to avoid. It kills me instantly with a charged swoop attack. I don’t get past the first phase again for another three attempts. My seventh attempt sees me killed by a concentrated blast from its thrusters; I get the name now. I manage to bring down Firebug on my eighth run by removing its remaining limbs – thus removing most of its attacks – and then going after its vulnerable undercarriage.

It’s a proper boss fight, managing to pack in two stages, a variety of attack patterns, a sense of scale and awe, a useful reward and just the right amount of frustration. It might not hit the adrenaline-fuelled heights of the Souls series, but if you found yourself wishing those Herculean bouts were just a tiny bit easier than the Surge’s boss fights are in that Goldilocks-approved zone of perfection. 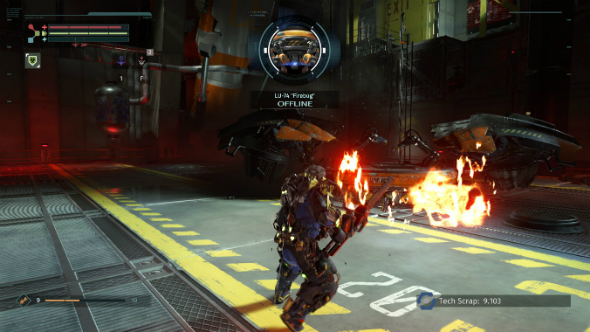 With Dark Souls III’s last offering of DLC now out the series is officially at an end, which means plenty of Souls fans will be looking for their next fix of tough-as-nails action-RPG goodness. The Surge deserves better than the status of rebound game. It has me totally hooked by its multifaceted progression mechanics, compelling learning curve and punishing combat. Every nook and cranny of its levels has been meticulously considered to ensure you’re rewarded for looking beyond the obvious path, whether that reward is a new enemy type with unique armour or a shortcut to make your life a little bit easier. Sure, it owes the vast majority of its mechanics to one of the most esteemed franchises of all time, but the similarities quickly start to fall away as it establishes its own twist on the Souls formula. Six hours in and it feels like its own game, and a really good one at that.

Looking forward to The Surge? Let us know why in the comments below.