Time and again science fiction games have returned to the theme of isolation – and not only because NPCs are such bloody hard work to animate and automate. In space, we’re confronted with the question of our place as individuals in a skybox with no edges.

Wondering which games to avoid in the void? Here are the best space games on PC.

“There’s something in all of us as humans that urges us to want to understand, explore and discover if we truly are alone,” says Bulkhead Interactive creative producer Howard Philpott. “Looking at a clear night sky you can’t help but feel that way.”

While his colleagues took field expeditions to Normandy in the name of re-cocking the WWII shooter, Philpott’s team researched Europa – the ice moon circling Jupiter some four million miles away from home.

It’s the best kind of moon: one where there’s just the slightest possibility of life. Beneath Europa’s thick ice crust, scientists hypothesise, there is a subsurface ocean. In The Turing Test’s future, an International Space Agency expedition has been sent to conduct the search. You are not Alan but Ava Turing, the crew’s engineer and backbone of the mission.

Cryogenically frozen, you’re awoken at the beginning of the game by the ship’s Technical Operations Machine, T.O.M., to fix an issue that’s beyond his synthetic capabilities. The puzzles you solve over the course of the game are Human Interaction Tests – essentially fancy CAPTCHAs.

You’ll make varied use of Ava’s EMT – an energy manipulation tool that functions much like Dumbledore’s Deluminator, allowing you to take power from one object, carry it, and shoot it into another.

In Bulkhead’s last game, Pneuma: Breath of Life, the puzzles reflected a broader theological bent; every problem was a new mystery with its own internal rules. In The Turing Test, by contrast, puzzles rely on cumulative knowledge – building logically so that you can take what you’ve learned and “use that knowledge as ammo”. 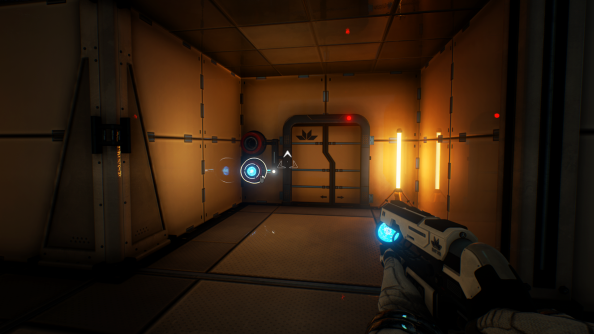 You’ll need ammo: the game is a constant struggle for power, literally and figuratively, against the “ever-growing presence of ever smarter AI merging into human culture”.

“In Pneuma we played with the idea of players fighting for control,” Philpott goes on. “In The Turing Test we push that idea even further and we’re hoping to really toy with human conscience and challenge player’s morals through our story. It’s going to be fascinating to see how players who work through the game’s puzzles and delve deep into the game’s story react.”

It’s not yet clear what state the ISA’s mission is in when Ava emerges from stasis, but Bulkhead intend to give players room to form theories about the fate of the crew – which suggests they won’t be around to tell their stories themselves.

“Our environment team has done a great job of creating unique immersive spaces to explore and learn more about the varied and deep backstories of the ISA crew members and their mission,” says Philpott. 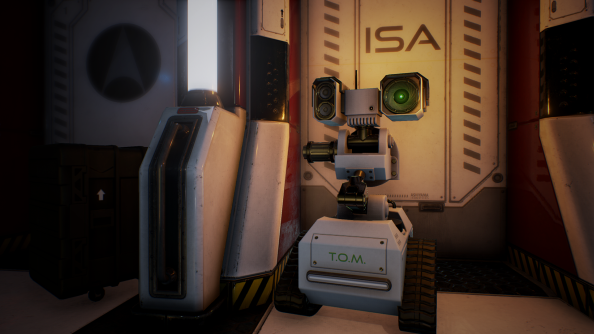 “This environmental storytelling is all brought together and rendered beautifully,” boasts Philpott. “There are some really dark stories hidden in the depths of The Turing Test just waiting to be discovered.”

Announced just last week, The Turing Test is nearly done. It’s a product of the Square Enix Collective, a mostly hands-off initiative the big-budget publisher set up to gently nudge small but worthy projects through production.

We haven’t seen a lot come of it yet, but Philpott says the Collective are helping Bulkhead “a lot”, particularly with support for their Steam release. 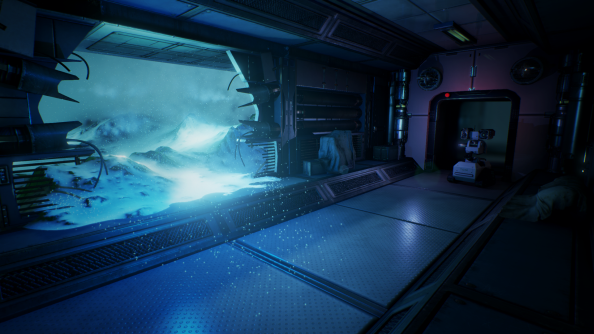 “They’re focused on supporting creative ideas and niche experiences, which was a great fit for us as a developer wanting to tell unique stories through our games,” he explains. “They have the perfect mix of indie spirit and publishing prowess.”

In The Turing Test’s trailer, Ava describes the alien life her team have found on Europa – not scary or complex, but simple, elegant and powerful. Those are the principles Bulkhead most admire, it seems; the design tenets guiding this meditative puzzler to PC.

The Turing Test will come to Steam in August 2016. Unreal Engine 4 development is now free.

In this sponsored series, we’re looking at how game developers are taking advantage of Unreal Engine 4 to create a new generation of PC games. With thanks to Epic Games and Bulkhead Interactive.