The fallout continues from NVIDIA’s async compute support speculation – an AMD employee has now claimed that the latter’s superior architecture will lead to a significant majority of DX12 PC games partnering with team red, rather than team green, for the coming year.

Over on the AMD subreddit – where the statement was hardly going to find an unsympathetic audience – the company’s head of global technical marketing Robert Hallock had this to say:

“You will find that the vast majority of DX12 titles in 2015/2016 are partnering with AMD. Mantle taught the development world how to work with a low-level API, the consoles use AMD and low-level APIs, and now those seeds are bearing fruit.”

The Mantle API Hallock’s referring to was developed by AMD and DICE as an alternative to Direct3D and OpenGL, designed to utilise both CPU and GPU more efficiently. It’s been adopted not just in PC gaming (Battlfefield 4, Thief and Star Citizen all support it) but by both the PS4 and Xbox One’s GPUs.

Hallock’s argument is that with so many developers working across platforms and trying to squeeze optimal performance from three different architectures, Mantle makes partnering with AMD a no-brainer. 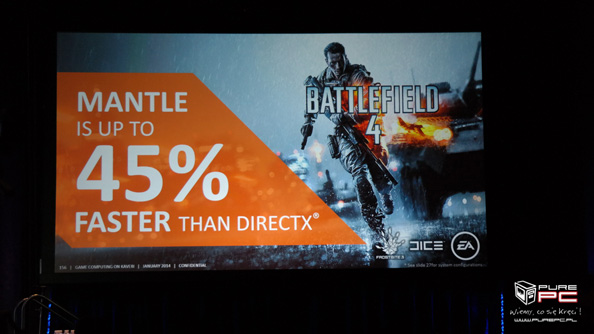 What do those lineups tell us? Not much, in and of themselves, other than they both appear voluminous enough that it seems unlikely either manufacturer will be partnered with the “vast majority” of titles in the next year.

It seems unlikely that either company has a clear idea of developer partnership deals for the next 12 months and beyond, however Hallock’s comments won’t go unnoticed in the wake of NVIDIA’s allegedly sketchy async compute support.

Currently, 52% of Steam users are using NVIDIA graphics cards, compared to 27% on AMD hardware (onboard Intel graphics account for the rest). AMD will hope that their GCN architecture and the way it handles asynchronous shading/compute commands will give it the edge over NVIDIA in DX12 games, whose Maxwell cards handle async tasks via software emulation, and swing momentum in the opposite direction.

As ever, we’ve reached out to both parties for comment.