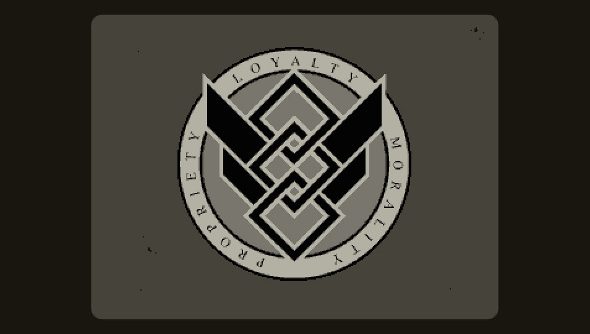 The Westport Independent, a game that puts players in the shoes of a newspaper editor working in a country ruled by an authoritarian regime, is quite a bit like Papers, Please. You can see it in the simple, tactile interface and the rising tension as you try to choose whether to be a government lapdog or take a stand.

It’s a bit broader than Lucas Pope’s lauded border sim, though, with staff to manage, newspapers to layout and distribution to work out. And you can take it for a spin right this very second, or once you’ve downloaded the demo, at least. It’s a free alpha preview, and is already rather good. 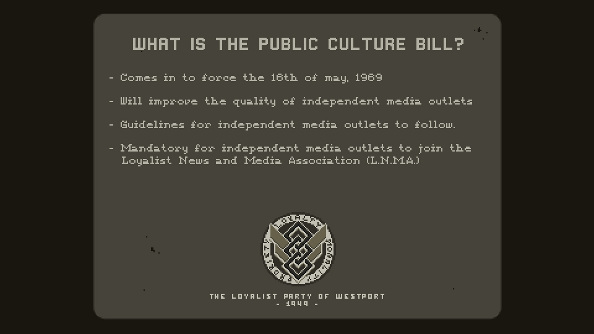 As the editor of The Westport Independent, you’re faced with a new culture bill that essentially ends independent newspapers. The bill outlines rules for publications, and these commandments essentially boil down to saying lovely things about the government, promoting the ideals of the government and shitting on the rebels.

The game’s split up into weeks, with the editor doling out articles, reading letters (usually threats from whatever group were featured in a less than glowing report in the previous issue) and generally stressing about what the future will bring.

A pile of potential stories can be rifled through, but how many of them can be published is down to how many staff are available. They can also be edited and censored with a simple click. Headlines can be changed as well, putting a different spin on the article. “Government funds construction of new park” could also be “Government demolishes hundreds of homes to make room for park”. 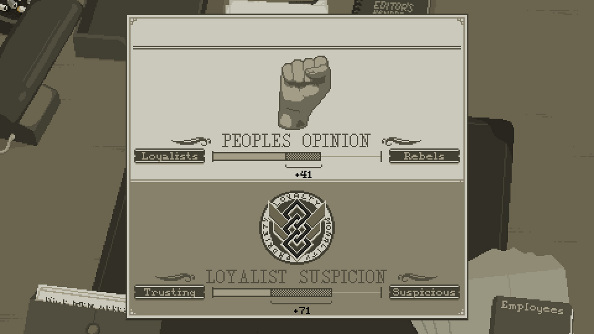 The options players have aren’t binary. The Westport Independent isn’t just about supporting either the government or the rebels –countless potential stories have nothing to do with either group. You can try and run a successful newspaper, catering to different demographics with stories about celebs or violent crime, finance, workers rights –the stories are as varied as they are out here in the real world.

Even if you do decide that your focus is going to be on supporting one of the two factions, the articles aren’t going to be effective if nobody reads them, which means you’ll need to figure out what your audience wants to read. So there’s a genuine newspaper management game in here. Different areas of the city want to read different stories, so you need to appeal to their hunger for salacious gossip or big business news while also, if you want to, drumming up support for either the rebels of the Loyalist Party. As more people buy your paper, your impact on their beliefs will start to increase. But you might also make the powers that be suspicious, necessitating a slap on the wrist from the government, or something a little more heavy-handed.

After the paper goes to print, the staff gather around and have a chat about the events of the week, sharing their concerns and seemingly mundane minutiae that subtly fleshes them out. These employees have their own political beliefs and backgrounds that inform their views on the world, so sometimes they’ll refuse to write a piece. They can be forced to write it anyway, but that will make the poor buggers very gloomy. 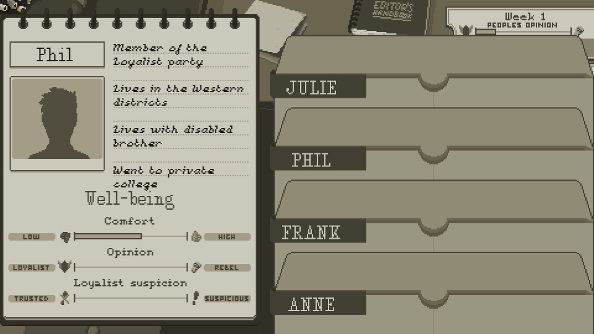 After just a few weeks, I started to feel a bit responsiblefor my little journalist pets. Even Phil, the biggest supporter of our evil overlords. He’s actually a nice, if slightly pitiful, fella. I feel especially responsible when one of my writers ended up getting arrested because of the pretty reasonable articles he was writing. The risk is much greater than a newspaper being shut down.

It’s still early days, and developer Double Zero One Zero emphasise that the demo is an early, unfinished slice of the game, which isn’t even close to being done. But don’t let that stop you from downloading it.