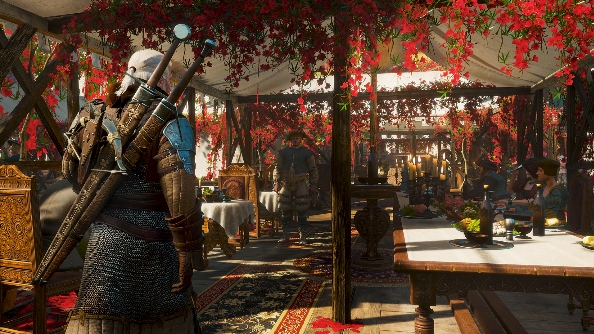 As you may have realised from reading our Witcher 3 Blood & Wine hands-on impressions, the RPG’s second expansion is, essentially, more of the same. Not that we’d ever complain about that. There are, however, a few differences in the way you can build Geralt’s stats and abilities. This time around you’ll be able to actually mutate the Witcher’s genes and continue making meaningful changes.

With two fantastic expansion packs, it’s no wonder The Witcher 3 is considered one of the best RPGs.

Now rein your excitement in just a little; we’re not talking the X-Men here. The White Wolf won’t be firing lasers from his eyes. However, in Toussaint you will come across a scientist who’s been studying Witcher genetics enough to discover how to manipulate them. Discussions with him will open up the Mutations menu, where you can push Geralt’s Witcher abilities even further. 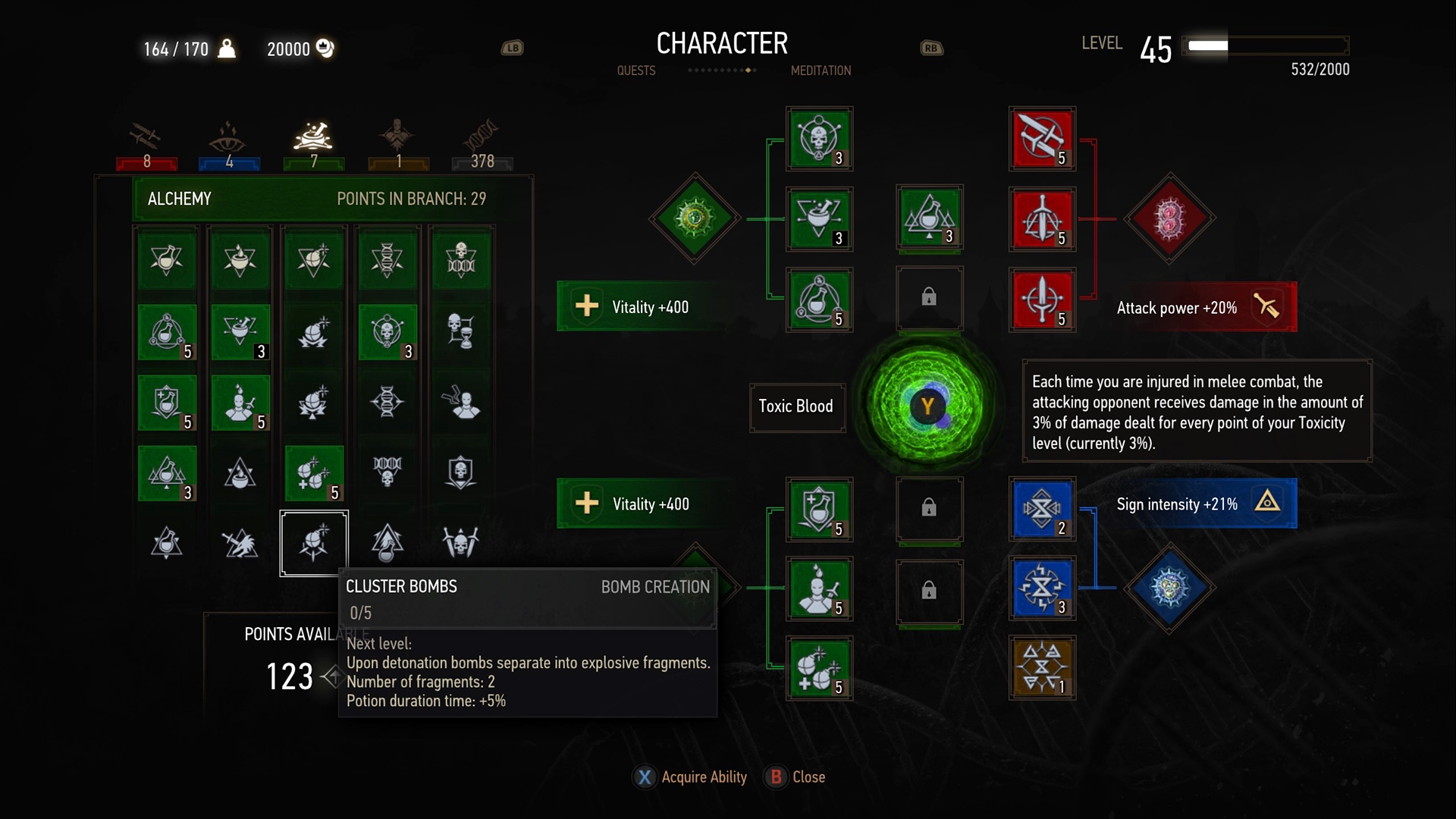 Above: On the new character sheet you can see the Mutations button (pressing Y takes you to the unlock screen), which is flanked top and bottom by four extra ability slots.

You’ll already be familiar with mutagens, which in the core game are used to enhance a set of four abilities with a small buff. Mutations are more advanced versions of those kinds of buffs, allowing a little extra scope to continue building Geralt, even if you’ve unlocked every ability on the skill tree.

A spider-web like graph in the character menu is where you’ll find mutations. Multiple strands connect node-like circles, with each representing a mutation that buffs Geralt’s skills in the usual three fields of combat, sign magic, or potion-brewing. Each one is unlocked by spending XP points and mutagens, offering a new way to use those blobs of colour filling your inventory.

Starting from the centre of the web and working outwards, you’ll need to unlock all the connecting strands before being able to unlock higher-tier abilities. The web’s design forces you to learn an evenly-spread set of skills; for example if there’s a melee skill you’re looking to obtain, you may need to unlock a magic and a potion-based ability to make it available.

While mutations offer strong buffs to Geralt’s witcher powers, they are limited: only one of the new mutations can be equipped at any one time. That may seem overly-stringent, but experimenting with mutations does offer more options for Geralt elsewhere. Unlocking new abilities on the web strengthens his ‘synapses’, and each new level of strength permits you to equip up to four abilities from the game’s standard skill tree. A fully upgraded Witcher will be able to equip 20 abilities (rather than the previous 16) plus one mutation buff. Even after 80 hours of play, Geralt can learn a few new tricks. 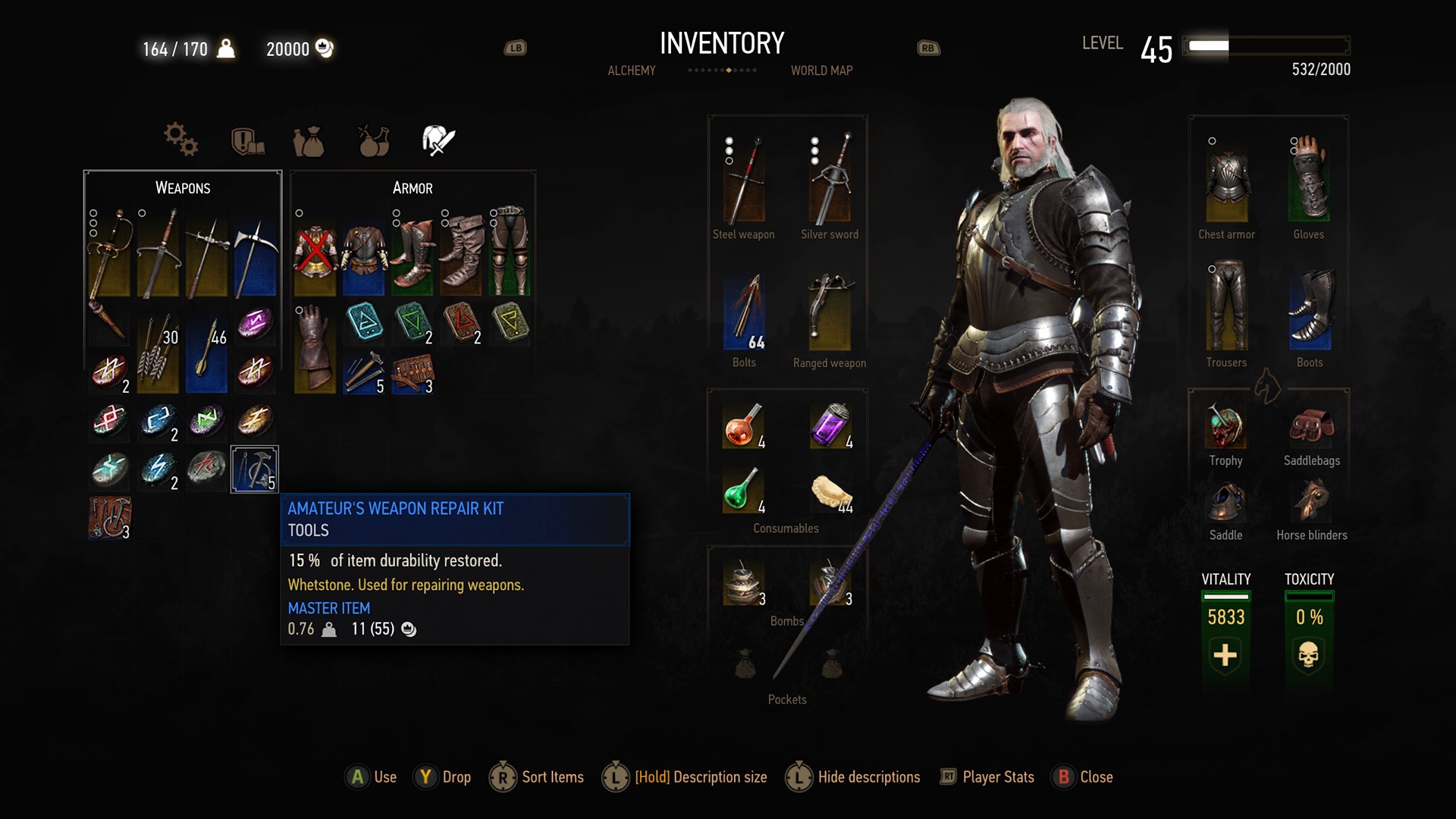 A Witcher is only as good as his equipment though, and you’ll find quite a collection of fancy new gear in Blood & Wine. Witcher Sets are new armour collections that confer bonuses when you wear all the multiple components at the same time (there are buffs for three or six pieces). They are, as you’d expect, astonishingly elaborate. Those looking to strike quickly like a bandit can wear the sleeker, simpler sets, while anyone looking to swing heavy and hard have the option of wearing what essentially looks like a wedding frock coat made of chainmail.

Witcher Sets are equipped from a newly-designed inventory which has been laid out in categories, meaning you won’t have to spend hours re-arranging your collections every time you try and find a potion. It’s a small change, but considering how often you need to root through your bag of possessions it’s actually a remarkable help.

As an expansion, Blood & Wine was never going to revolutionise The Witcher’s progression system. But it has added a meaningful extra layer in mutations, which once again forces you to consider what unlock will aid you, rather than just equipping everything. Witcher Sets offer a little more complexity to gear, and will no doubt see players adapting their style to make the most of set buffs. They’re just two examples that demonstrate Blood & Wine’s commitment to continually tweaking and refining what was already a superb set of RPG systems.