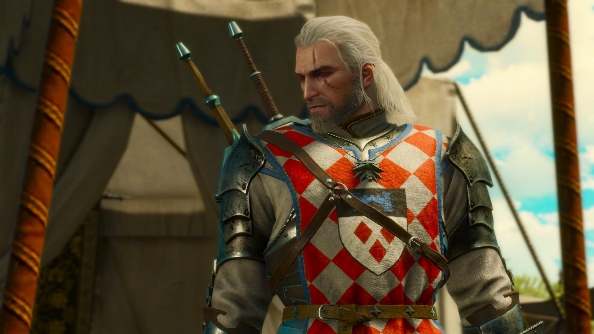 In the grim deep of a damp cave, Geralt performs an autopsy on the latest victim of a brutal serial killer. Torn into three grisly pieces, it’s certainly not the worst thing he’s seen, pretty typical Witcher fare. But for the people of Toussaint, the fairytale-like kingdom the White Wolf finds himself in now, it’s a travesty; the most heinous thing they’ve seen for years.

The Witcher 3 undoubtedly deserves its spot on our list of the best RPGs on PC.

Blood & Wine, the second and final expansion pack for The Witcher 3, is a world of two sides. Much like the title itself, it features death and celebration side-by-side in a world that’s a complete contrast to the dour lands of Velen and Skellige. This is a story that, for all its eventual dark twists, is far lighter, joyful, and even comedic than its parent.

Toussaint, as the name suggests, feels directly inspired by southern France, with a little Tuscany thrown in. Beautiful sunsets cast gold glows over fields of dancing sunflowers and grapevines. An Elven palace crowns a mountain. The population is pompous and excitable; noble knights of virtue who have not been torn apart by war, but are instead preparing for a huge medieval-style tournament. A tourney that Geralt himself can find himself wound up in.

Yes, Blood & Wine actively encourages you to get involved with the fickle affairs of these people. The tourney itself is one of the larger side quests in the Witcher journal, and has you competing in three tasks to prove your worth in front of crowds of shrieking and chanting onlookers. It’s genuinely exciting, involving a mounted dual and the biggest Game of Thrones homage any fantasy RPG has offered.

For Geralt this Disney-like world of knights in shining armour is an amusing aside from his regular ventures. Characters ask for help, and he listens with a wry smile as they explain their trivial problems. Having just averted the apocalypse, he’s now being asked to help a knight woo a lady who he’s fallen madly in love with despite only having seen her once. It’s a striking contrast.

If that all sounds far too frivolous for you, fear not. The core of Blood & Wine revolves around the aforementioned serial killer, and while it’s not exactly the biggest bad The Witcher has ever featured, there’s still danger. The region’s ruler, Duchess Anna Henrietta, has requested Geralt’s skills to bring the murderer to justice. And so that becomes your task: to work out the killer’s pattern you must put on the deerstalker and become Sherlock of Rivia. 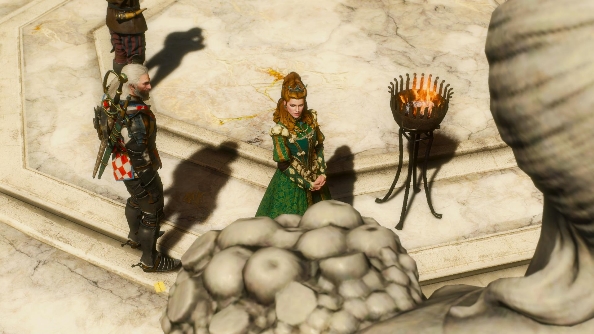 It’s worth noting the effort that’s gone into Anna Henrietta. While the main game’s Emperor Emhyr var Emreis was a lofty, hands-off employer who only turned up to offer a few minutes of Charles Dance-flavoured gravitas, Anna is the complete opposite. She’ll be at your side during many stages of the hunt, essentially taking the place of the likes of Triss or Yennifer. Toussaint may be miles from familiar ground for Geralt, but thankfully he can still rely on a collection of strongly-written, engaging allies.

The hunt for Toussaint’s ripper is a fun way of repackaging the Witcher style. You’ll be doing all the familiar things – sensing footsteps and scents, rifling through rooms for evidence, and analysing victims – but the crime wrapper gives the whole thing a very different atmosphere. This is no mere monster hunt; this is tracking down a dangerous attacker with a specific MO and motive, and as you thread together the evidence you feel like the closest this world has ever come to a master detective.

Typical of what we’ve come to expect of The Witcher, not all is what it seems, and you’ll soon discover the well goes a lot deeper than a standard murder enquiry. Mysterious figures pull the strings on various puppets, and the narrative descends into wonderfully gothic territory as it builds. 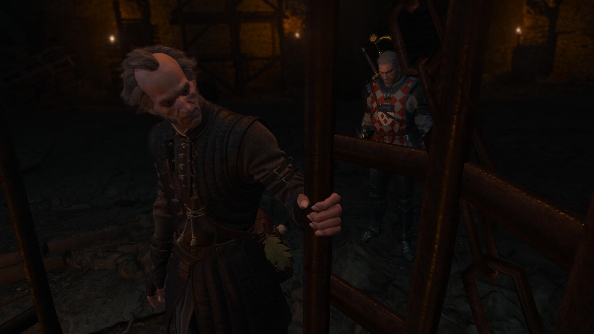 And as soon as the darkness encroaches, you can be sure that Blood & Wine will offer up something that will have you laughing. A soirée held for the region’s elite creatives, the setting for a lead investigation, features a public canvas at which you can hurl balls of dye. As you throw them with random carelessness, art critics coo and bicker about how the work is representative of the artist’s soul (he clearly has intimacy problems).

After a life on the road as a permanent nomad, Geralt finally has somewhere to put his feet up in Blood & Wine. As part of his payment for taking on the murder inquiry Geralt is given the Corvo Bianco vineyard: acres of fertile land and a large, dusty house manned by your own butler (Barnabas Basil Foulty, a knowing nod to the infamous Torquay hotelier). It’s a base that you can improve through the hefty investment of gold. Should your pockets be brimming with coin (and I do mean brimming) you’ll be able to upgrade and redecorate. Aside from making the place look grander, many of these upgrades confer bonuses. New stables increase Roach’s stamina, while a garden will grow herbs for use in potion brewing.

While the vineyard isn’t player housing in quite the same manner as Skyrim’s The Sims-like Hearthfire DLC, having a place to call your own allows you a sense of progression perhaps unexpected from a chapter you can play when at max level. It’s also thematically relevant; with CD Projekt closing their doors on at the White Wolf, this is clearly Geralt’s retirement plan. 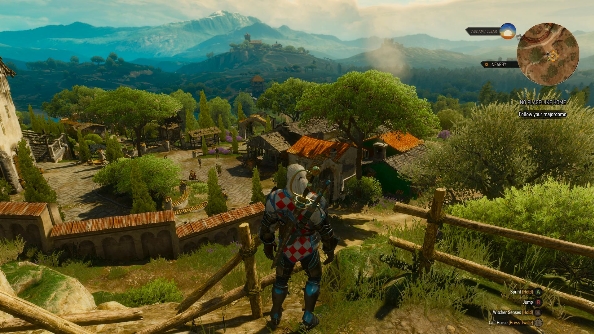 If that’s not quite the form of progression you were hoping for, then one of Blood & Wine’s other side-quests may interest you. Urged on by Yennifer, Geralt can investigate the works of Moreau: a professor experimenting with Witcher mutations. The result of this quest line is a new ability tree for Geralt, made up of significant new buffs that are unlocked by spending mutagens and experience points. On offer are fancy new magic sign modifiers than can cause enemies to explode upon casting, and the ability to build attack damage with each subsequent blow. You can only have one of these new abilities equipped at any one time, but progressing through the tree provides up to four additional slots for Geralt’s regular skills. A fully-upgraded Witcher will be able to equip 20 skills and one mutation ability.

A little extra power will certainly help you out in battle, which frequently feels more intelligent. While there are plenty of ‘normal’ encounters that require you to be proficient with blade and side-step (notably a superb set-piece where a room is flooded with enemies), the majority of one-on-one counters need a more thoughtful approach. An early beast is blind and heavily armoured, demanding clever use of sound and the environment to slay. Often you’ll be flicking through the Bestiary to work out how to bring your foe down, with the use of oils and potions being practically mandatory on anything above the easy difficulty setting.

If the idea of having to keep jumping back into your inventory for potions strikes you with horror, then perhaps you can be reassured by CD Projekt’s overhaul of the character sheets. Inventories are now separated into logical columns that can be swiftly navigated between. It’s a small improvement that genuinely makes life a little easier, and it’s nice to know that even this late in the game CDP are willing to refine even the most fundamental elements. 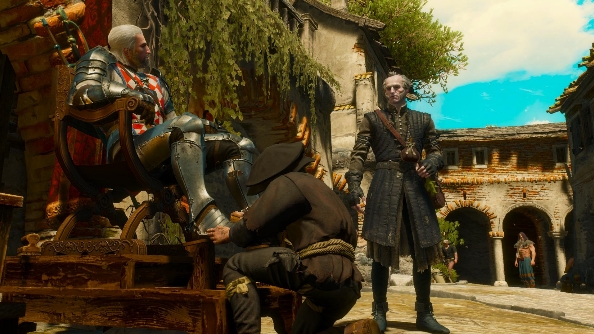 Blood & Wine is the most interesting The Witcher has been in its entire lifetime. It’s a brave move from CD Projekt to make its final chapter in the game so tonally different. But by being lower-key and set in a world that is almost certainly home to a man called Prince Charming, the game provides its most memorable and enjoyable stories. The fairytale nature happily goes the Grimm route when things need to get ugly, but this is an expansion unafraid of throwing players into a much lighter arena.

It was inevitable that The Witcher 3 would close on a high, but few will have expected what they’ll find in Blood & Wine. While unrequited love, barrels of red with a blackberry aroma, and excessive amounts of pomp may not be what you think you want from The Witcher, it won’t be long until you’ve changed your mind.