As we reach the precipice of the hill, I pull gently on the reins of my steed. It’s been a long trek, but we’re almost there. We gaze out onto the land before us, as the setting sun bathes the sprawling plains in an orange red glow. I can’t help but think the landscape in front is larger than anything we’ve seen before. If I were a betting man, which I am, I’d say it’s around 35 times larger in size than anything I recall. Just then, a light breeze carries the unsettling moans of wolves and wraiths and bears from the near distance. Best reach the village before dark.

Erring on the side of safety, I draw my distinctly well-polished sword, catching a glimpse of my reflection in the process. I have a beard now – a subtle indication that I’ve been travelling for some time. He-yah, I cry as I pull the reins taut, and we thunder towards the small town down below.

Yes, Geralt of Rivia is back in what is to be his final outing, and having been on the road since we last met, he’s ready to part with a bang. Everything in The Witcher 3 is a little on the nose, and the standard fare of warring factions, social and political unrest, mystery and deception and measured decision making which can affect the overarching narrative of the entire bloody game, makes a welcomed return. A sinister force named the Wild Hunt is thrown into the mix this time around, meaning monster hunter Geralt has work cut out for him from the off. Oh, and he’s got a beard now. But not because they’re in fashion. He’s been roughing it lately.

Set for release in May of this year, a lot rests on the shoulders of Polish developer CD Projekt Red’s conclusion to its Witcher trilogy – this entry named Wild Hunt – because, aside from being one of the most anticipated games of 2015, it’s been delayed three times up to now. Delays are universally irritating, however in the case of the Witcher 3 it’s equal parts frustrating, equal parts reassuring – should CDP’s ethos of refusing to release games early, and therefore unfinished, be believed. Having tasted just a smidgen of what’s on offer, I’m happy to accept that they know what they’re doing.

In the interim, CDP have been working on introducing a slew of new features into the world of the Witcher, some of which include: a completely revamped combat system, which finally offers players full control whilst fighting; a ‘Witcher sense’ which allows Geralt the ability to source clues or leads – like the whereabouts of a missing townsperson, far better integrated side quests; a dynamic day and night cycle which evokes more dangerous beasts after dark; and new and improved Witcher signs, to name but a few. 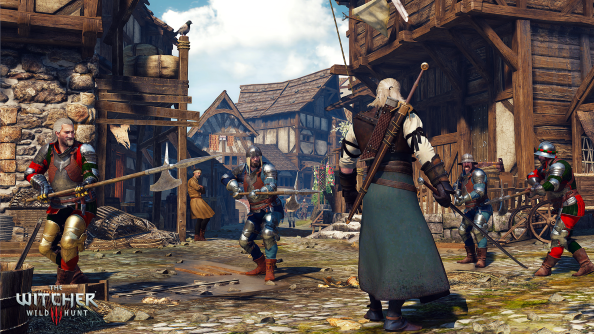 The demo segment which we’ve been given free roam of has all of this and more, but it’s clearly all but an introduction to what the game will ultimately offer come full release. It’s impressive, in that there’s plenty to explore and interact with, but it’s evidently been designed to boast what it can within the bounds of a fairly restricted time frame. As an open world sandbox, then, the big question is: how big is it?

“The number that we throw around is that it’s 35 times larger than all of the playable areas in The Witcher 2 combined,” explains level designer Miles Tost, “personally I find that very abstract, though. I think the important takeaway here is that when you play it, you won’t want to measure it, you won’t really even notice how huge it is because you find yourself caught in the things that you do. Size doesn’t matter that much.”

Another important takeaway is how accessible Wild Hunt feels. Historically, the Witcher series has inculcated notoriously steep learning curves via its multi layered systems, combat, and lore. The Witcher 3 doesn’t quite hold the player’s hand, but it does feel a lot more forgiving overall when compared with its predecessors. Fret not, for this isn’t done so in a condescending, manner, but in a sensible one. Geralt’s ruthless and mercenary persona is delivered with subtlety, both into his surroundings, and throughout the development of his character.

The systems, combat, magic, and crafting feel nuanced. and I was rarely left puzzled when calculating strategies in battle – certainly not after taking the time to steady myself and suss things out. What’s more, CDP religiously maintains that each series entry can be played standalone, but The Witcher 3 feels like the first which this genuinely applies to. That said, as someone who’s played (and enjoyed) this game’s forerunners, fully understanding the series’ ridiculously complex lore is a challenge in and in itself. 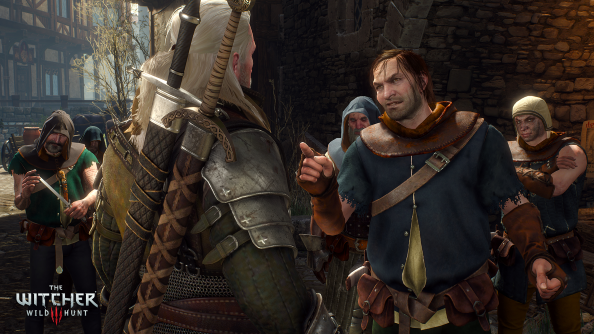 Tost makes clear he’s reluctant being tied to numbers and comparisons – although he does at one point describe the world’s main city area, Novigrad, as “truly the biggest accessible city in any game ever made so far. The game itself will take at least 50 hours to complete.

“People often ask what came first – the size of the world or the content,” says Tost, “we basically outlined the main quest and the world becomes this large out of necessity, which is why I think we were able to hit a good soft spot with how populated and how unrepetitive the quests feel. We adjusted the world towards the quests and that kind of shapes how we made the locations.

Some of the main quest was defined by the writers and the source material as to how it would look. Skellige or Novigrad, for example, they appear in the books, so they have a very defined style.

“If an area is described as boggy or swampy, it of course can’t be all swamp.That would be boring. So there is a swamp, there’s some fields, there’s a forestry area, etc. It sounds simple, but you work from a broad picture and go smaller. You have a huge world, divided into sub categories, sub categories divided into subregions, and you go smaller and smaller.”

During my playthrough, one thing I couldn’t help admire was how well integrated Wild Hunt’s side quests are. Whereas in past Witcher renditions, and various other competitor’s sandbox titles, side quests often felt jarring or tacked on. These trimmings, on the other hand, felt like genuine crusades – even the ones which had no obvious link to the main expedition.

After stumbling across a village noticeboard – a handy way to take on odd jobs, earning extra cash as a mercenary for hire – I was informed of a haunted water well nearby, whose ghost was terrorising the locals. Upon arrival, I learned the sad tale of a young woman who’d taken her life and was now caught in a state of purgatory, besetting the well in the form of a Noonwraith. After getting my arse kicked a few times, I eventually had the savvy to apply my Witcher sense and was thereafter informed that this beast was unbeatable by regular combat, but weak to attack once trapped in my ‘Yrden’ Witcher sign spell. In doing so, I then cast Igni fire magic until the girl’s spirit was freed, and the townsfolk could return to the well. 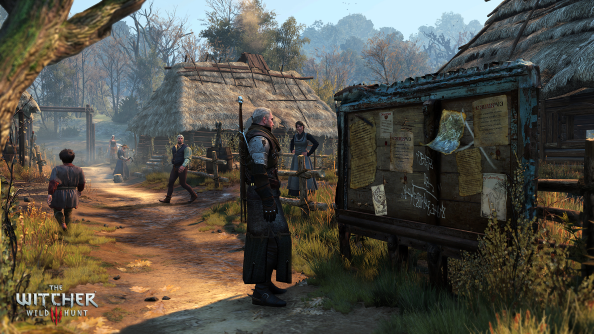 All told, this took up about 45 minutes of my time. It didn’t feel tedious as I was learning to hone my skills in the process. Should CDP maintain this level of intrigue throughout the game’s side plots, they’re surely onto something good.

“Actually we treated every quest alike in terms of intention, be it main quest or side quest,” says Tost, “I think you can tell – there’s a lot of love that goes into designing each of these. They have their twists – they might start out as something that you recognise from other games, and say ‘ah, I have to find the box of this merchant in the swamps’, and ultimately it takes a very different turn where you have to make some choices that will ultimately affect things on a smaller scale, but also on a larger scale.

“The consequence can be either that I get the gold – this guy is rented out, he gets sold to the highest bidder, or whatever comes of it when I go a different road. I think that’s something really cool about our sidequests, that they feel a lot more integrated, that’s something that we’ve definitely been aiming for and they do supplement the main quest in that they can be totally individual, but the can be also be connected.”

Levelling up has also undergone a bit of a makeover. The entire system is paired back and more straightforward than its forebearers . Completing quests and killing enemies will land the player experience points. After accumulating enough, these points can be assigned to abilities such as fast attack, strong attack, or marksmanship.

There are four skill zones which are interlinked depending on how the player chooses to sculpt their version of Geralt’s skillset, allowing just a small selection of skills within the entire swathe of what the Witcher can demo.

There’s four months to go before the Witcher is released, and yes, I did run across some bugs: unpassable terrain, frozen dialogue and occasional pop-in. But even now, I could see that the game is something very special; imbued with that rare sense of passion you get when a developer is at the top of their game.

The Witcher 3: Wild Hunt will released in May.