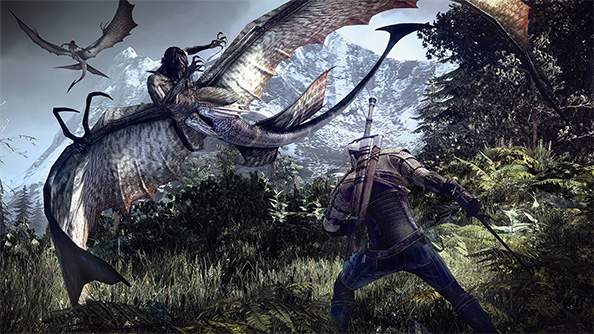 Putting his big art producer foot down during an interview with news outlet Enternity, CD Projekt Red’s Michal Stec has insisted that the PC version of The Witcher 3: Wild Hunt will not be graphically constrained by its cross-platform development on Xbox One and PlayStation 4.

Not one bit. Not one flesh-coloured pixel shall be lost. Not one raunchy frame shall be dropped. And every last hair on every contorted body shall be fully accounted for.

Pixel-counting fans have already begun to grumble following concerns of a drop in visual fidelity in recent gameplay trailers, a drop that they firmly attribute to the lower-spec console versions of the game. Art producer Michal Stec is defiant however, stating in no uncertain terms that The Witcher 3: Wild Hunt will not compromise on graphics in the slightest, despite those grubby console boxes and their sluggish specs.

“No. That’s the answer,” Stec says, “we’re not downgrading it. We’re optimising the game, but in a way that doesn’t effect the visuals.”

So there. Those non-visual, performance-related optimisations are one of the reasons behind the game’s delay, he continues. You can watch the full interview below.