Every year we play hundreds of quests in RPGs, but a huge number of them disappear into the mists of memory. Filed under ‘fetch’ or ‘fight’, there’s little else to note these tasks by. The Witcher 3 is different; its quests seem far more than an arbitrary task for a pointless NPC. Instead, even the simplest favour can turn into an epic undertaking involving betrayal, love, and death.

Love a good romp through fantastical worlds? You need the best RPGs on PC.

To find out what makes The Witcher’s adventures so good we sat down with Patrick Mills, a quest designer at CD Projekt RED and formerly Obsidian, to discuss at length what the secrets are to creating involving missions. With those secrets smuggled back from Poland, we can now release them into the wild as part of our quest design masterclass.

So without further ado, please take your seats, turn to page 394, and pay attention to the lecture slides.

A good quest can come from anywhere 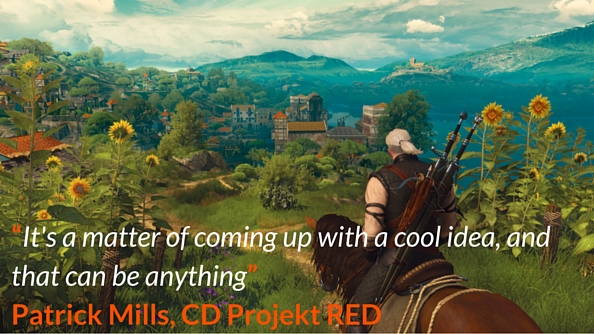 Starting with a blank sheet of paper is a nightmare for anyone in a creative industry, and that’s certainly true for quest designers. Just where do you start in creating something that will get people playing? Well, it could be literally anywhere.

“It’s a matter of coming up with a cool idea, and that can be anything,” explains Mills. “An interesting scene, a funny joke, an interesting situation, or even something gameplay related. Would it be interesting to have Geralt do this different thing?”

With even the smallest, most abstract idea, a quest can be coaxed out. It’s all about applying something that is worthwhile to the situation. “I look for the core themes, the ideas that could support some sort of emotional, mental investment in what’s actually taking place,” reveals Mills. “Then I develop those with the story team, and from there you have a quest.”

Every quest must tell a story 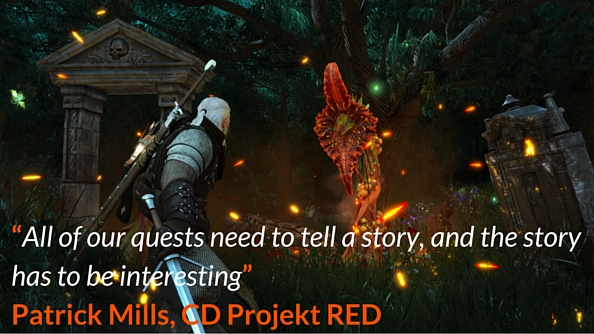 You’ve played fetch quests so many times now that you recreate them in your head to help cure insomnia. It’s plainly obvious why they’re a terrible idea: why should you, hero of the realm and defender of the pure, spend your time finding fish for the local fisherman? All too often these types of quest make little sense, and have no narrative framework to support the task.

“All of our quests need to tell a story, and the story has to be interesting,” states Mills. “Every monster hunt in the Witcher 3 has its own arc: it has a beginning, a middle, and an end. For side quests I come up with the core idea and then I sit down with the story team and we work out those details. “OK, this character, this is what they like, this is what their motivations are, this is where they’ve been” We come up with that all together.”

Part of achieving that is, especially in triple-A development, very heavy on resources. “It’s a matter of production being willing to say “Yeah, go for it! Tell that story, you will have the resources you need to tell that story.” There were times in the Witcher 3 where you’d build a quest out, and you’d discover that you just needed a few more lines to properly tell the story. And sometimes you could get them and sometimes you couldn’t, because it’s expensive,” reveals Mills.

Thankfully CD Projekt RED have been generous with money when it comes to keeping the production values on questing high: the Blood & Wine expansion features 14,000 lines of spoken dialogue, compared to previous expansion Hearts of Stone’s 6,000.

But even if you don’t have the cash to splash on voice-over actors, narrative is essential to making quests feel like they are worth a player’s time. Character dialogue is not meaningless waffle if it helps provide motivation.

Banish your fear of dialogue 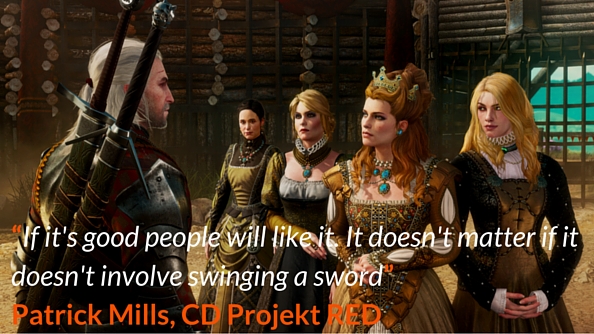 Talking of dialogue, don’t be frightened to use it. It’s easy to think that conversation in games should simply be there to top-and-tail the actual ‘doing’ bit (normally combat), but when done correctly, dialogue is an equally engaging element of the game.

“I think something that CD Projekt RED understands is that if your scenes are interesting and your story is interesting, then that is gameplay,” emphasises Mills. “People will enjoy playing it. That’s been our philosophy on this: if it’s good people will like it, and it doesn’t matter if it doesn’t involve swinging a sword.”

So whether you’re just demonstrating character motivations with a cutscene, or turning words into weapons ala Deus Ex: Human Revolution’s conversation battles, dialogue is as worthy of time as traditional ‘gameplay’ elements. 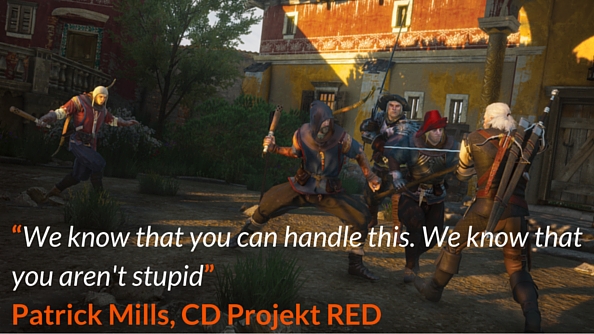 You’re not going to capture a player’s imagination if you don’t give them anything to think about, and if your player isn’t engaged, then why do they want to play at all? The Witcher 3 is often described as complex, and that has never been seen as a downside. Mills believes the layers of political and moral intrigue draws players into the world rather than repelling them.

“We’ve never backed away from complexity,” he states. “We trust our audience. If we’ve made something interesting, we trust that if players are engaged they can understand and appreciate complexity. The only time people really shy away from complexity is when it’s presented in such a way that they’re not engaged with it or they feel powerless to it. If you give people agency and you engage them in it then people gravitate towards complexity, not away from it. Trust your audience. They’re smart people.”

We frequently hear about games being made increasingly accessible, but that should never be seen as the same as simplified. Making your game engaging is what makes it accessible. And sometimes that engagement comes from a narrative that’s multi-layered and, importantly, mature in the correct manner.

“Sometimes you see games that claim they have mature storytelling when really it’s adolescent storytelling. It’s just tits and blood, and yeah that’s ‘mature’ because it’s rated R, but it’s not the same thing.” 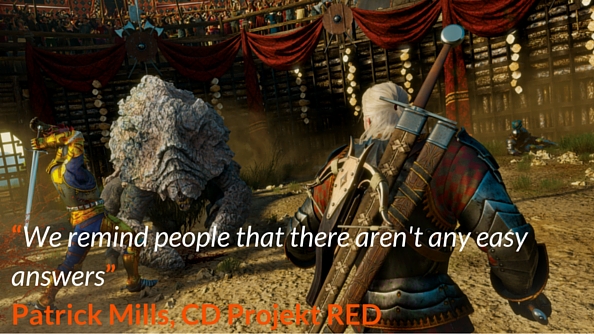 One thing that’s important in adult life is making big decisions. We’ve all had to do it, and we understand that when it comes to major choices nothing is clear. Recreating that feeling of uncertainty helps anchor game decisions in a sense of reality, even if the choice involves dragons or the apocalypse.

“One of the things that I like about this sort of story telling is that we remind people that there aren’t any easy answers,” explains Mills. “That those sort of heroic narratives – this is the good option and this is the bad option, this is neutral, who do you want to be? – that’s not the way the world works. It feels false. It can still be fun but it doesn’t feel real, it doesn’t feel like this connects to my life.

“In my life I’ve never been presented with a good, evil, and neutral option when there’s a difficult choice. It is often bad or worse. Sometimes it’s bad and different bad. And good things can happen, but there’s always a mix of good and bad.”

Frequently RPGs make the mistake of revealing major repercussions just seconds after a choice has been made, allowing players to re-load saves without having to spend time re-playing large sections. There’s no real detriment to making sure the end result of a choice is the way the player wants it to be. The Witcher games delay these kinds of revelations, which helps prevent ‘save scumming’, but also emphasises the elements that help ground the experience.

“In life you don’t get those easy decisions with immediate repercussions. You make a choice and you have to live with it,” says Mills. “You may not know the repercussions ever at all, or when you do see things come back to you it could take a very long time. That’s the world we live in and that connects to people.”

Let the player do what they want 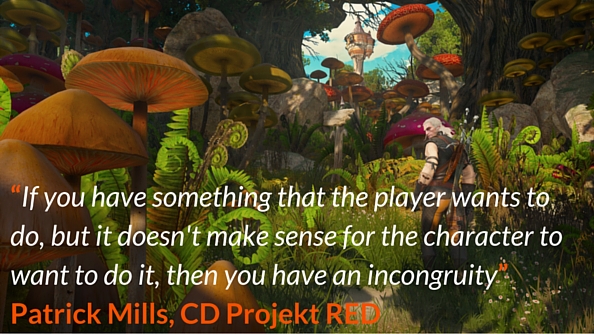 When combining quest and story design, it’s important to remember that there are two people involved: the player and their character. In a non-interactive medium like a film it’s fine for the hero to head off and do something that the audience doesn’t want them to do. But in games the audience needs to want to get involved too. Force players to perform tasks they don’t want to do, and you’ve failed them.

The key is to make players invested enough in the world that they’ll want to engage with it. Mills notes that from the very start of The Witcher 3, the dialogue design is forging ties between the player, Geralt, and other characters, so that people feel compelled to be involved in the world. “You can see connections develop between the characters in the first few minutes of The Witcher. You’re introduced to Yennifer, Ciri, and Vesemir and you know where Geralt fits into this situation. Now the player can want some of the same things that Geralt wants.”

Remember to work within your limits 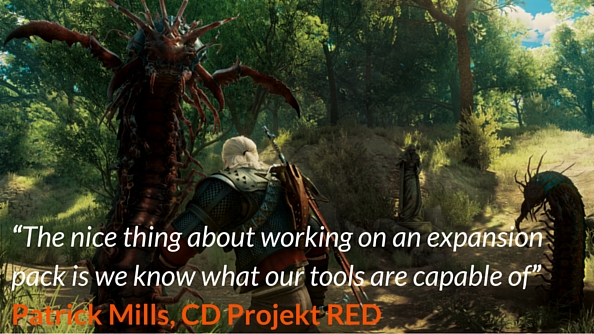 Ambition is key to your design, and provided you’ve got the cash to spend it’s advisable to sink it into making your quest as immersive and detailed as possible. But you do need to remember your limits. If you’re producing a quest that suddenly demands the use of destructible terrain, that design is going to end up in the bin if your engine doesn’t support it.

“I remember a design from a designer a long time ago who had written this scenario for a game, and it was based on the same engine the previous game had used,” recalls Mills. “So he’d made assumptions about what this new game would be capable of and he was way off the mark, lots of things had to change later on. And that is the sort of thing you wind up with when you walk into a new technology, or even a technology you think you’re familiar with. You have those notions of what you’re going to be able to do, but it doesn’t always work out.”

Mill notes that with development on the Blood & Wine expansion, the quest design team were happily familiar with what they could achieve: “One of the nice things about working on an expansion pack is we know what our tools are capable of. That sort of problem doesn’t happen as much.”

Embrace the possibilities of new tech 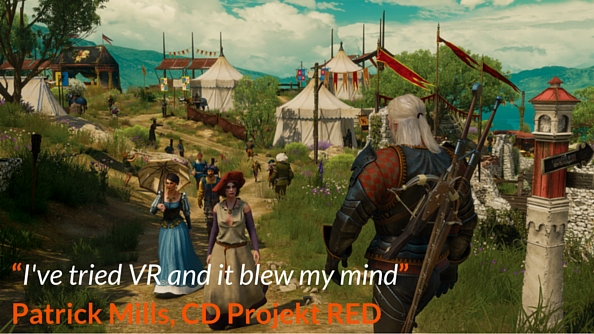 Looking back on the long history of the RPG, technology has always been a major element in its progression. From pens and paper to 2D sprites, onto the first 3D dungeons and towards seamless open worlds, it’s perhaps one of the key genres for embracing innovation. Looking to the future, Mills is convinced that new technology is always going to influence how RPGs are built.

“The future is going to be very interesting. There’s been this resurgence in RPGs. I think the proliferation of platforms is going to mean that there’s going to be innovations that are very difficult to foresee,” he predicts. “VR is extremely exciting. I don’t know if we’re going to be able to do the same thing we do now on VR, but I’ve tried VR and it blew my mind. I’m very excited to see what can be done with that.”

As the introduction of 3D graphics helped us become more immersed in fantastical worlds, Mills believes that virtual reality is the next logical step into making supernatural worlds feel like real places. “Immersion for me has been a thing that I’ve really enjoyed,” he explains. “One of my favourite games of all time is Ultima 7. If you go back and play that, that was the first great open world RPG. That was the one where you can go anywhere in the world, you could do anything in this world. With something like VR you could really boggle the mind.”