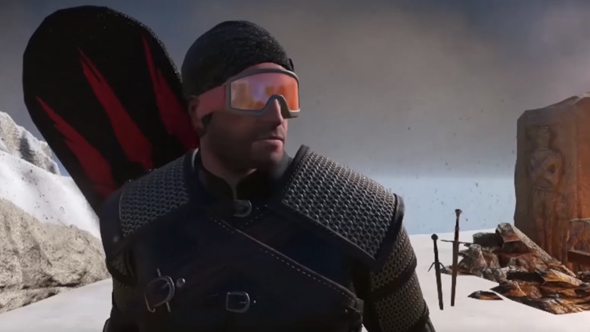 When Geralt gets to a bit of land that’s too steep in Witcher 3, he adopts a wide-legged stance and slides down the hill like he’s riding an invisible snowboard. At some point, the development team were so enamored with this goofy bit of animation that they actually made a new skin for Geralt featuring a ski gear and a snowboard, and would drop this version of Geralt on snow mountaintops to watch him shred his way to the bottom of the slope.

Check out the best Witcher 3 mods.

It doesn’t seem that this was ever planned to be part of the final game, but what if? Imagine the Geralt Extreme Sports spin-offs that might have been.

That’s one of the stories from episode three of Noclip’s Witcher documentary, which is absolutely filled with fascinating insight on the development of the series. (If you want to see the snowboarding in action, it’s at 16:35.) The first episode focused on the origins of CD Projekt, the second on the development of Wither 1 and 2, and now the third is focused on how The Witcher 3’s world came to life.

As CD Projekt’s first open-world game, it presented unique challenges. The world was essentially built in broad strokes, with artists and level designers coming by in waves to fill in the details and make certain the land was populated with interesting things. One artist might come to a village and realize it looks bare, then fill it in with flowers, trees, and rocks. Then a quest designer might come through and see this adorable little town and want to write a story for that location – but the houses are empty. So that designer talks to an environment artist, who asks about the people living there and what their relationships are like, so then the home is populated with relevant stuff.

It’s a massively collaborative process, and you can see by degrees how a world so giant managed to be populated with so many interesting, detailed locations. Of course, the bottom-up approach had its own problems, like when a famine-stricken region ended up populated with all the same foodstuffs the richer areas enjoyed.

There’s loads more and, again, it’s well worth watching the doc if you’ve any interest in how The Witcher was made. Two more episodes are set to release over the weekend.