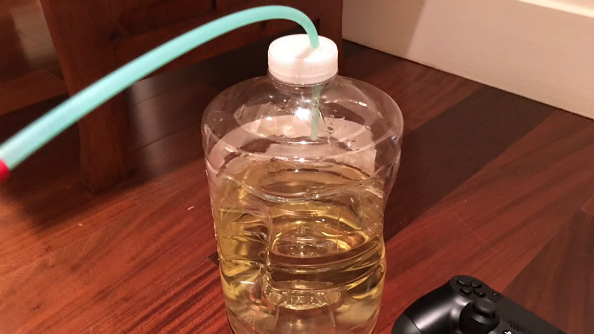 Jonathan Blow caused a bit of a stir on Twitter last night. The prominent indie developer and creator of upcoming adventure/puzzler The Witness posted a photo of a… er, contraption which he claimed had helped during the game’s crunch phase. Let’s make no bones about this: it’s a bottle of piss (or at least intended to be) with a straw coming out of it. There’s a lot to be read into the image in terms of time pressure, work ethic, and satire. But the burning question few have asked so far is as follows: is this the urine of a properly hydrated person?

Blow’s upcoming title The Witness is one of the upcoming PC games worth keeping an eye on. He’s gone to quite some pains to make it, so it’s the least you can do really.

Here is another thing I helped make, to help finish The Witness: pic.twitter.com/w7rEn1VsVg

Blow has since pointed out that if people were as interested in the indie development scene as they were in his bottle of wee, the scene would be a whole lot healthier.

While the man has a point, it’s hard to resist the rare opportunity to gain an insight into the hydration levels of one of game development’s most prominent figures.

Using the urine colour chart from this helpful New South Wales government health advice page, we’re able to establish that, no, Blow probably isn’t dangerously dehydrated. If you’d like to play along at home, here’s a colour chart we’re allowed to use here:

However, there is some indication that the Braid developer may be somewhat dehydrated, and is best advised by the NSW government to drink a large glass of water immediately. No adventure/puzzle game, no matter how exquisitively the mazes are designed, is worth losing your health over, Jonathan.

Medical experts advise a daily water intake somewhere in the region of half an ounce to an ounce for every pound you weigh. Failure to take on enough water can lead to problems with proper functioning of the kidneys, and a failure to break down and pass minerals such as calcium.