Thermaltake has been steadily working away to improve the looks of its PC chassis, and the latest Thermaltake A500 TG case is one of the prettiest I’ve ever seen the company create. Though calling the A500 ‘pretty’ is maybe doing the stylish case a disservice considering its robust, clean, almost Power Mac aesthetic.

Where previous Thermaltake chassis have erred on the more aggressive, ‘gamer’ styling – all exposed fans, vents, and sharp, angular design – the A500 TG is a far more simple, understated case… and all the better for it. But, despite that simple brushed metal exterior, this pricey chassis has everything you could possibly want to customise the interior of your perfect gaming PC.

The entirely modular design of the A500 means that it can be completely stripped back to basics, allowing you to pull it apart and configure it however you wish. Whether that and the polished good looks are enough to justify the $239 (£218) price tag, however, is the first question we need to address for Thermaltake’s gorgeous chassis.

Yes, that’s a lot of cash to spend on the clothes for your PC parts, but given that you will have already spent hundreds on your machine’s component parts it can go one of two ways. Either you decide you’ve spent enough and skimp on the chassis – making yourself a little rat rig in the process that looks like a nightmare on the outside but runs like a dream – or you suck it up and wrap your pricey PC goodies in an equally pricey chassis.

The latter is what Thermaltake is hoping you decide to do, but at that price point there are a host of other cases, such as Phanteks’ Enthoo Evolv X or Corsair’s Obsidian 500D SE, and the A500 TG has to do a lot to stand toe-to-toe with those guys. 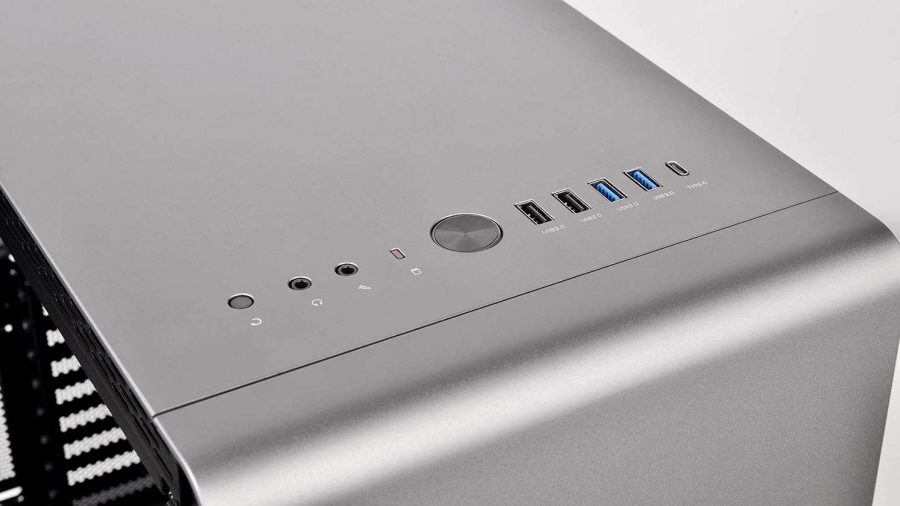 In terms of the basic specs, we’re talking about an ATX case, just over half a metre in height, with a pair of darkened, tempered glass side panels and a brushed aluminium top and front, all wrapped around a rolled steel frame. It comes with a set of fans pre-installed – two intakes at the front and one in the rear – but they’re sadly not from the top drawer of Thermaltake’s fan collection.

And I don’t just mean that they’re not laden with RGB LEDs either, they’re the ultra-basic Thermaltake case fans and, while they’re quiet enough, they’re not the best-performing in terms of dragging heat out from inside your PC case.

But there is still a lot of scope for cooling inside the A500 TG. The roof and front of the case will happily support up to 360mm and 420mm radiators respectively, allowing you to plumb in some serious chip chilling. And, with all the drive bays being removable, that means you could go the whole swine and drop in a bespoke liquid cooling loop, replete with colourful reservoir and pump setup too. Helpfully Thermaltake will sell you an entire homebrew water cooling kit if you’re up for taking the plunge yourself, though that is more than the cost of the chassis itself… 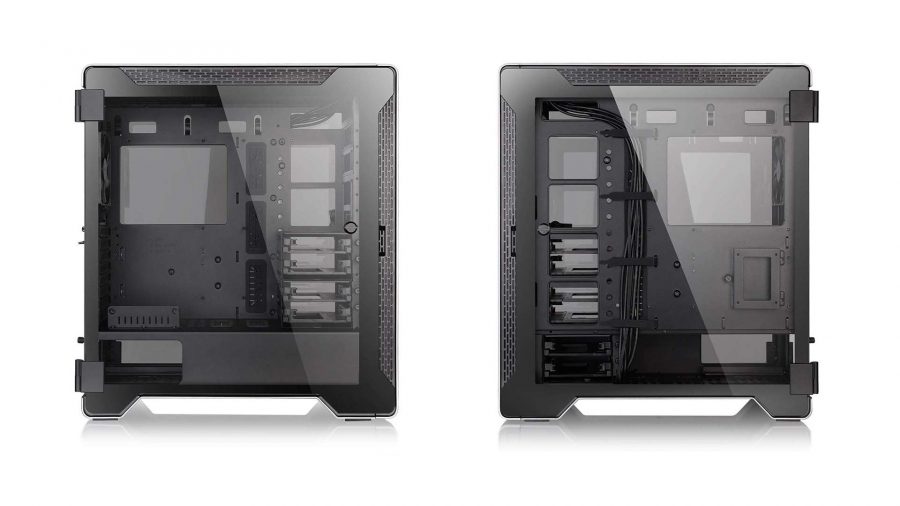 And that roomy inside space means that you can jam in as big a graphics card as you can find and still have clearance around it. That also means it’s a joy to build into. There is a host of cable management holes, a huge cutout behind the motherboard to give you unfettered access to the CPU cooling mounts, and none of the edges have been sharpened to razer levels thanks to a decent finish industrial. I can’t count how many times I’ve cut myself building into chassis with rough finishes, mostly because I’m rapidly running out of fingers. Thankfully, that’s not an issue at all with the A500 TG.

The top panel is clean and unfussy, yet has everything you need. There’s a large LED-ringed power button, smaller reset button, audio I/O, and five USB ports in both 2.0, 3.0, and Type-C flavours. 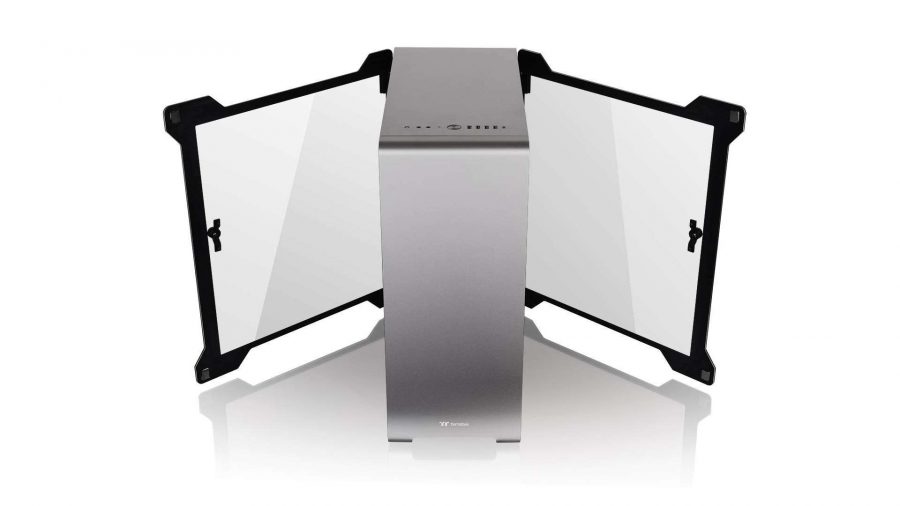 It’s a great case, and it’s given my Ryzen/Radeon office machine a serious facelift compared with the ancient Cosmos Ultra chassis it previously sat inside. That darkened tempered glass side panel showing off both the LEDs of the GPU and CPU cooler to glorious effect. Though those shiny side panels are actually my only real issue with this otherwise impressive case – I kinda hate the hinged effect.

The doors swing open easily enough, and shut tightly thanks to a combination of strong magnets and a physical twist-catch mechanism. But, while you can lift the panels from the hinges without having to attack it with a screwdriver, it does require you to have enough space around your PC to swing them open in the first place. 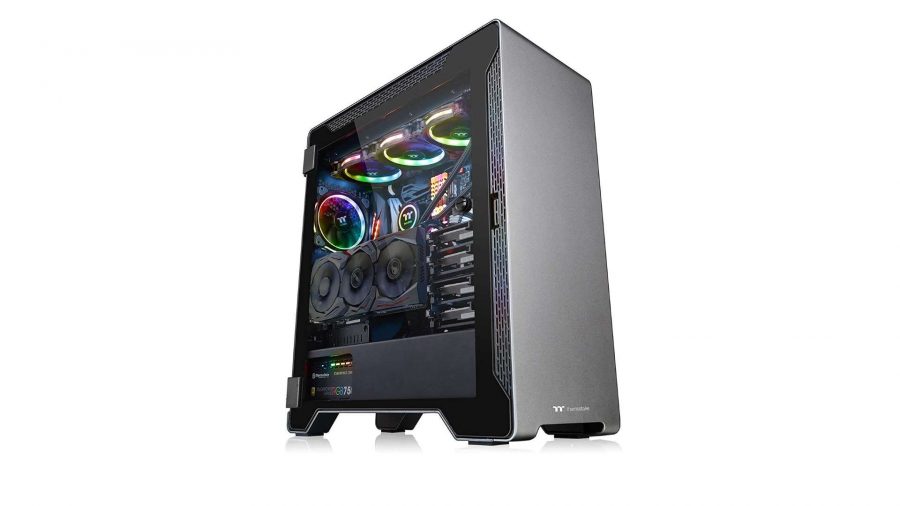 If you just want to do a quick GPU swap – a niche concern for hardware reviewers only, maybe – then for me it requires shifting the entire system to a space away from my desk where I can open the doors enough to lift them off completely. With a standard screw-on or latch-lock panel you can just undo and remove it without needing a lot of elbow room.

But that’s the most minor of concerns, and isn’t enough to keep me from continually looking down lovingly at my newly clothed office PC. The build process inside the A500 TG is simple, the looks are gorgeous, and the utility is excellent. It’s only really those hinges, the fans, and the price that are of any concern, and even then they’re not exactly deal-breakers.

I’d maybe prefer some superior fans for the price, and the hinges aren’t my favourite, but it’s great to build in and the A500 TG is also one of the best-looking high-end PC chassis Thermaltake has ever produced.