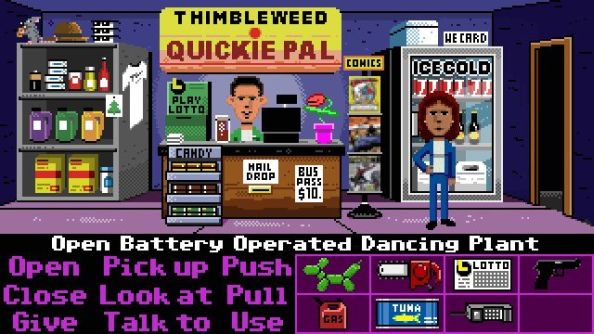 Thimbleweed Park is the new and unimproved adventure game Ron Gilbert and Gary Winnick Kickstarted last year. It promises the 1987 experience, with simple art and a case full of verbs, for better or worse.

It seems last week Gilbert worried aloud on a podcast about the game’s bank balance, and fans with Broken Age’s fractured development fresh in their minds extrapolated that the Maniac Mansion creators were running out of money.

Gilbert has taken to his blog to show his backers otherwise, and in the process reveal his approach to game budgeting.

“I am worried about money,” he says. “Anyone running a project should be. The thing is: I worry about things so they don’t become problems, and worrying about money is one of those things. If we didn’t worry about money everyday, we would run out of money. It sneaks up on you.”

Back at LucasArts, staff were shielded from the “gory ramifications” of going over-budget.

“If I went over by 20%, I might get a stern talking to, but it’s not like people weren’t going to be paid,” remembers Gilbert. “When you’re running your own company and project with your own money and you run out, people don’t get paid and they don’t like that. In the real world, they stop working.”

Now in the big, bold world of independent game-making, Gilbert has a big old spreadsheet that catalogues all the costs likely to come the Thimbleweed team’s way before the game is finished.

“Each month I look at what we spend versus what we expect to spend then make any adjustments to future costs,” he explains. “I then remove the current month column, look at the projected total and the bank balance. If there is more in the bank then we’re projected to spend, then we’re OK, back to programming and designing.”

Gilbert and Winnick, it turns out, are working for “peanuts” – about a quarter of what they’d expect to be paid in a larger studio. Their staff, too, aren’t earning what they might be under the wing of a major publisher – but are being decently compensated for their efforts.

“It’s important to have team members that can work as professionals and you pay people that are professionals,” believes Gilbert. “You should respect people’s time and talent and pay them for their work. It’s what the Kickstarter money was for after all.”

The team have budgeted for a potential two extra artists, and another writer to make sure the Monkey Island-style dialogue happens. And beyond that, there’s cash set aside for testers, music and SFX, translation, voice recording, mobile development, and showing the game at events.

Gilbert reckons his monthly burn rate will “raise some eyebrows” among fans.

“This is a pretty barebones project (but not scrappy) and it still costs $20K-$30K a month,” he says. “It’s why when I look at other Kickstarters asking for very little money and they have a three page long team list, I get skeptical.

“This is how games are made, they take time, cost money and it’s a very messy process.”

Is Thimbleweed Park the kind of unreformed adventure game you’ve been waiting for?