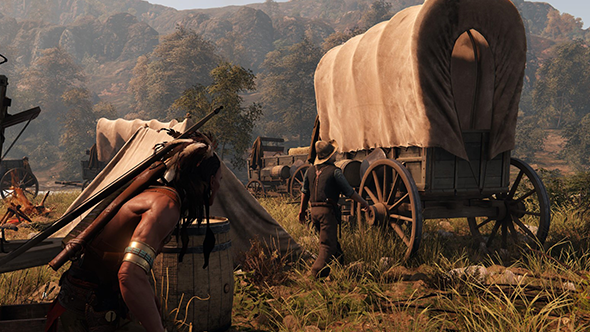 If you regularly spit chewing tobacco into a tin at your local high noon saloon, then you might want to take a look at This Land Is My Land, a newly announced open world western from Game Labs. It looks darn pretty and aims to give a new perspective on the American frontier. While most westerns put you in the saddle of a cowboy, This Land has you play a Native American.

According to This Land’s website, the focus is on creating a hostile world where you’ll need to rely on stealth to achieve your objectives. What is particularly interesting is that many elements of the game seem set to change each time you play. “Every playthrough will be unique because the world will change every time you restart the game,” the site reads. “Cities will grow differently, camps will develop in altered places, and patrols will take new routes.”

Considering the focus on stealth this is a particular challenge, many of the best stealth games are so good because they’ve been tightly designed with guards’ patrol routes dictated by designers. If the map is generated by the game then those routes will need to be intelligently laid by the engine.

This Land’s website also draws attention to its AI, saying, “Game mechanics will treat you as an intelligent adult who can make smart decisions to overcome our cooperative AI, that intelligently reacts to threats and changing surroundings.” Considering This Land is being made by Game Labs, the maker of the Ultimate General series, I can believe it. I’m dead excited to see what they have up their sleeves.