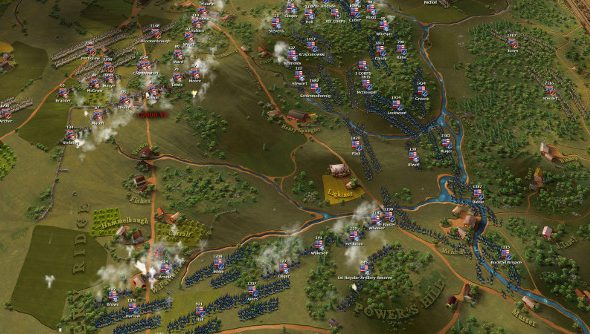 Ultimate General: Gettysburg finds a perfect balance point between history, the depth that wargamers crave, and the effortless simplicity that makes it instantly appealing to a broad audience. It’s not an introductory wargame, because that implies it’s just for people starting on a journey where the destination is a Gary Grigsby game. Instead, it’s a wargame for everybody, the likes of which only arrives once in a great while.

It is also a remarkable effort from Nick “DarthMod” Thomadis, who has gone from being one of Total War’s most talented modders to being an outstanding game designer in his own right.

Making the Battle of Gettysburg feel fresh and new once again is a major achievement in itself. It’s one of those battles that’s been wargamed into the ground, and anyone who has been around the hobby can draw maps of the battlefield and unit starting positions in their sleep. Each day of the battle unfolds like a ritual, a religious ceremony of the grognard faith. Buford conducts a defense in depth against the Confederates’ Harry Heth and, piece by piece, the rest of the ensemble takes the stage. Here comes the Iron Brigade, now Ewell arrives from the north. The Union holds Seminary Ridge as long as they can, but if they overcommit, they lose the entire battle. Onto the Second Day…

These are steps in a dance that we’ve rehearsed many times before, in a lot of great games going back twenty years or more. Yet Ultimate General: Gettysburg finds new places to go with the battle, and puts a new spin on the familiar dynamics of Civil War combat. Most impressively, it does this in a way absolutely anyone can appreciate and enjoy, but without compromising historical verisimilitude.

Great historical wargames tend to be argumentative. They have an angle on a conflict, and idea of what it was “really” about. Sid Meier’s Gettysburg was about morale, but more accurately it was about all the factors that enabled soldiers who desperately wanted to run like hell to stay in the battle line while the bodies piled up around them. Generalship in the Civil War, Meier seemed to say, was about finding ways to bolster the will of your own men, through positioning and leadership, while breaking the will of the enemy’s. Unity of Command surveys the entire sweep of the Eastern Front in World War 2 and says, “this war was driven by supply lines” and derives one of the best wargames in years from that principle.

Ultimate General: Gettysburg is about husbanding resources in the face of Clausewitzian “friction”. Everything you do saps your army of its strength and will. Only rest and inactivity can replenish those resources, but how do you do that when you need every last soldier just to hold a line, or drive an assault forward? So the game becomes about knowing when to act, knowing where to act, and knowing when to do absolutely nothing. Simple principles, but endlessly difficult to apply correctly in practice. They make for a great game.

I think introductory wargames tend to be a bit stronger in this regard, because they don’t feel an obligation to cover everything. They can be about a couple salient aspects of a war, but they don’t need to get the simulation right down to every soldier’s last cartridge and every commander’s individual personality and abilities. The simplicity that makes the game inviting for a more casual audience is also what makes a game like Ultimate General so clear in its purpose.

But it wouldn’t work if Ultimate General didn’t somehow also get across the sweep of the operations or the scale of the battlefield. It’s a vivid and beautiful game, where the blue and gray armies surge and retreat like waves on a rocky shore, eddying in hotly contested coves and breaking against commanding reefs. It’s a clever game, but it’s also a beautiful and functional one. You draw the lines on the battlefield with a swipe of the mouse or the finger, like you’re illustrating a living military atlas, and then the soldiers lurch into motion in accordance with your will. Smoke billows from the lines, cannister fire throws gusts of death into closely packed ranks, and the ground gets littered with tiny, broken bodies.

In later scenarios, as the battle expands to encompass a few square miles of Pennsylvania farmland, I started to feel like a puppeteer with a particularly cumbersome marionette. Fighting at two widely separated flanks on the battlefield was completely separate, almost two battles at once, yet they were connected through my decision making. Where would reserves go? Should they go anywhere? Maybe starting a new fight in the center was the winning play? Maybe extending a flank was the smart move, or trying for an envelopment? But every move took time, and drained my soldiers even more. The boldest moves could results in the biggest victories, or turn a hard-fought battle into a complete debacle.

The branching structure of the campaign is another great feature that kept me coming back long after my first efforts at outdoing Lee and Meade had ended. Lots of games have featured something like this, where your performance in one scenario sets up the next, but Ultimate General goes one step further by including a kind of military “choose your own adventure” aspect that lets you decide what your army’s next step will be. If you perform well in one battle, do you take the cautious option (one that might lead to an easier scenario but make for a harder battle down the line), the practical option, or the daring option that will push your luck and your abilities, but could lead to a far more decisive outcome in your favor? 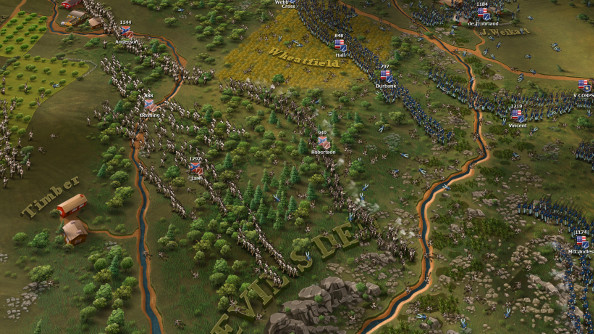 It’s not completely up to you, because there’s still the pesky matter of your own performance. Things can start to snowball if you reel from one disaster to the next, and you’ll find yourself playing hypothetical scenarios in parts of the Gettysburg area you’ve never heard of or seen before. More than once, my Union army found itself desperately clinging to the Round Top hills while the Confederates controlled both the major ridges outside of town and threatened to rout me altogether.

Honestly, Ultimate General: Gettysburg is not what I thought I’d be picking for my personal Game of the Year. Titanfall and War Thunder both gave me some of my highest highs, and Endless Legend was a breath of fresh air. At the time, I thought each of them would be my pick come December. Ultimate General seemed like a delightful detour.

But pure delight, it turns out, is enduring in the mind. When I came to actually considering the games of 2014, only one gave me such immediate, positive memories. Only one game was the thing I’d find find myself reaching for when I had a few spare minutes, or when I was on a plane heading across the country. There were games that were more impressive, that were bigger and more ambitious, but there has never been a moment since it came out that I was not in the mood to play some more.

For giving me such pure and undiluted pleasure, Ultimate General: Gettysburg is my personal favorite from a very good year.