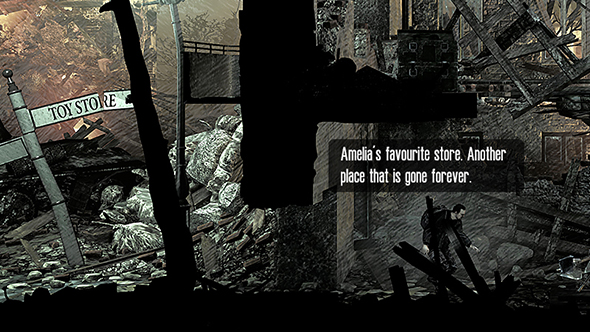 Bleak wartime survival game This War of Mine has been a grim favorite ever since its 2014 release, and it’s about to expand its offerings even further with a new set of stories that give a more narrative-driven spin to the game’s core management and survival. Titled This War of Mine: Stories, the three episode first season has just begun.

The first of these stories is called Father’s Promise, and will have you in the role of Adam as he tries to get his daughter out of the besieged city. It’s a story of “love, hate, and sacrifice,” and I’m not sure I’m emotionally prepared for the tragedy that will inevitably result. The story is based on an audio drama by Polish author Łukasz Orbitowski, and features four new locations, five reworked existing locations, and new game mechanics around dialog and clue-hunting.

Since these three episodes are described as the “first season,” you should probably expect more in the future. It’s not the game’s first foray with DLC, as the Little Ones came up last year, and we even got a free anniversary update a little while later offering new endings and locations.