Let me tell you about my Spore Warden build, because I’m particularly excited about it. A Mushroom Companion accompanies me throughout Brighthoof and its neighbouring burghs, ready to spew out poison damage on all who stand before me. While he’s doing that, and looking pretty darn adorable too might I say, I’ve got a shotgun that looks like a cauldron with a muzzle, which I reload by sprinkling fairy dust into it. That takes care of smaller enemies – your furious funghi, and goblin tinkerers with their remote control bombs.

For bigger groups and bosses I keep a quill full of spectral arrows at the ready, and larger targets get the brunt of my freeze-damage assault rifle, which can often turn weaker targets solid for long enough that I can get up and smack them with an axe and make crushed ice of them. I’ve plunged all my points into status effects and my Mushroom Companion’s HP and damage, so his poison really hurts now. Tiny Tina’s Wonderlands is pretty fun.

If you must pull me away from its world for longer, consider that this is the second full-length spinoff of Borderlands, itself three games and about 4,000 DLCs deep now. One of those DLCs already established Tiny Tina as a dungeon master in a game of Vault Hunter DnD and explored that premise for several hours. We should, by rights, be pretty sick of this formula by now, and it’s testament to the sheer writing and design talent of this dev team that we’re not.

A quick plunge into its meta-metanarrative for those who didn’t play that Borderlands 2 DLC: Tiny Tina assembles a group of vault hunters for a tabletop game called Bunkers & Badasses (there’s that word – this is definitely a Gearbox game) which is a lot like DnD, except with a lot more guns and eyebrow waggling.

You’re the hero created by one of the Vault Hunter players, Valentine. That means that as you sit at your PC looking at the game world, you’re looking at an imaginary world dreamed up by a fictional character, occupying the role of a player-character for the fictional character your player-character in Borderlands might have interacted with. If you’re confused, imagine the movie Inception, but Leonardo Di Caprio started thinking about videogame characters playing DnD while he was in Cillian Murphy’s dream. You’re there. 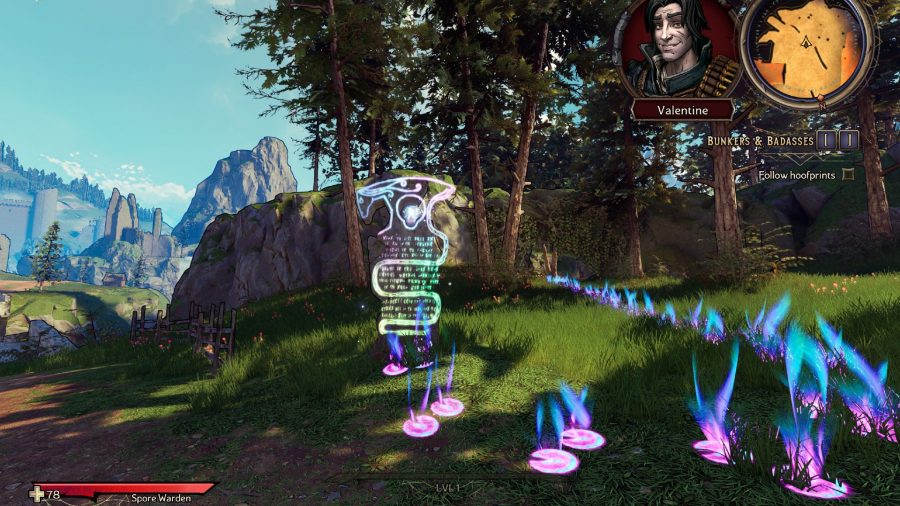 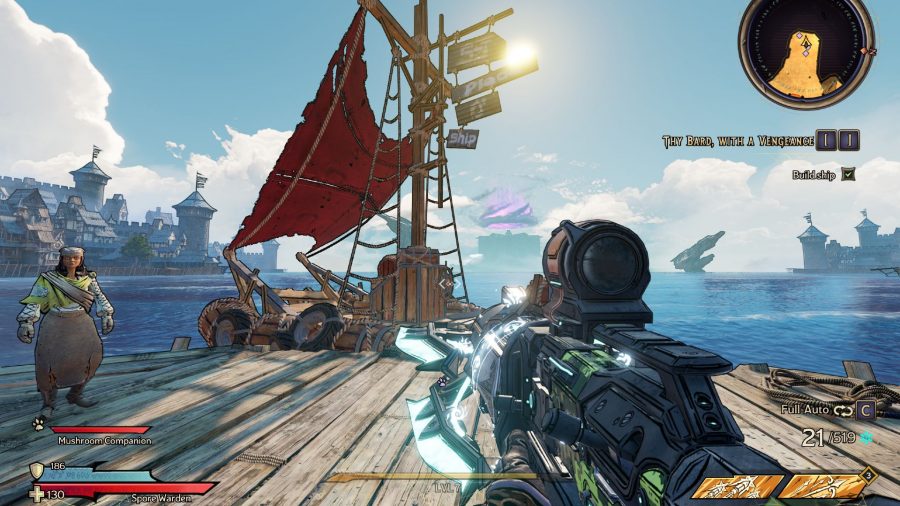 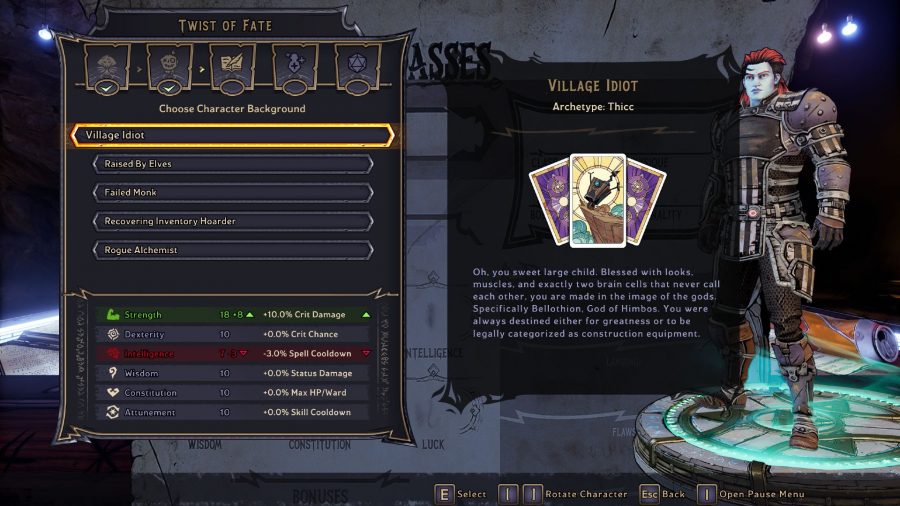 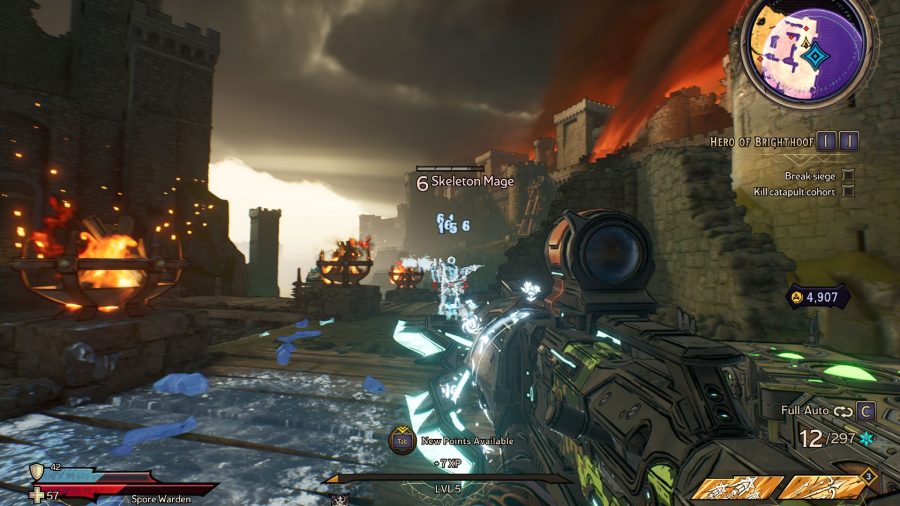 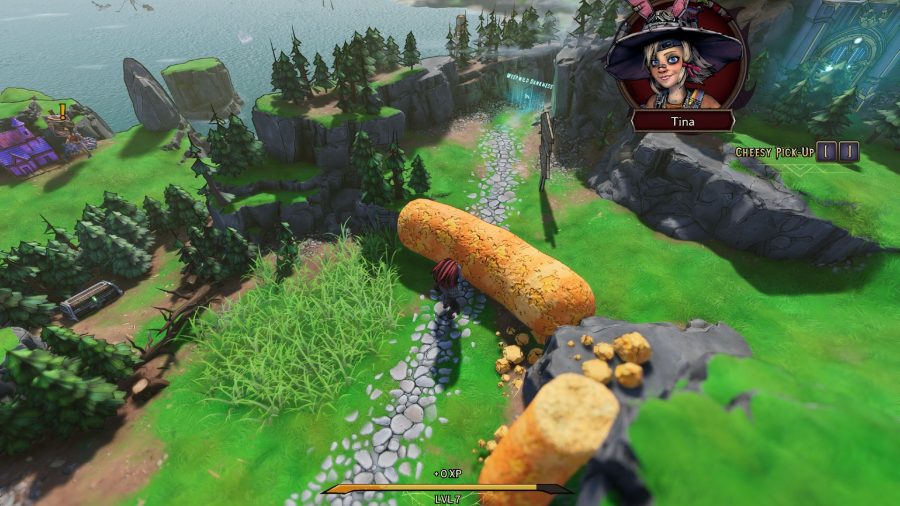 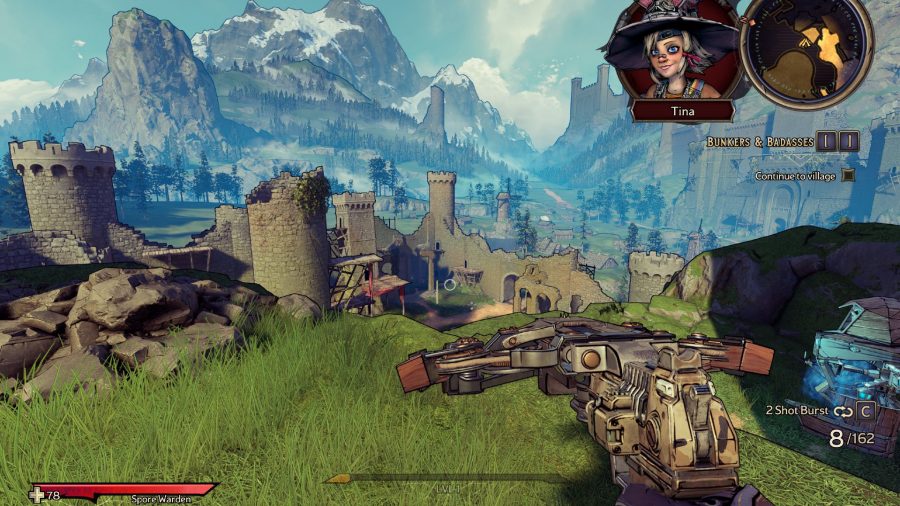 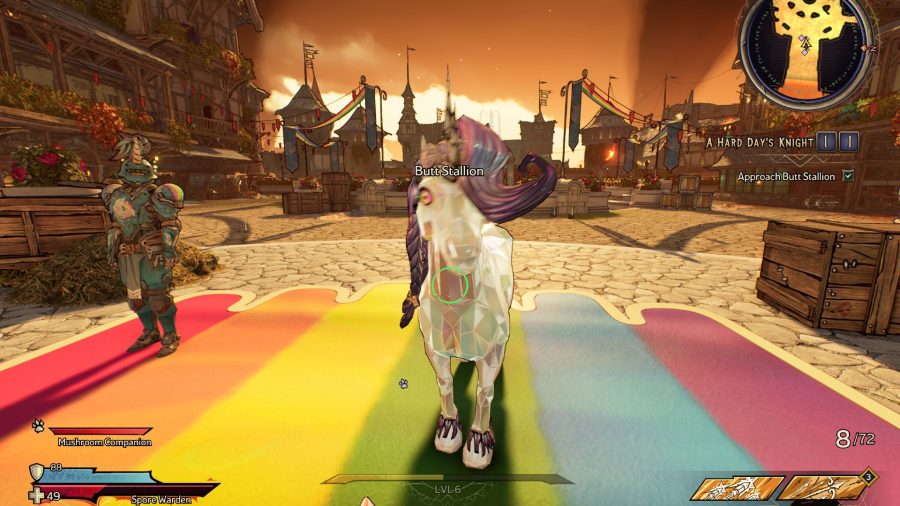 That gives Gearbox’s writers a delicious opportunity to treat the whole endeavour like an improv class. Borderlands hasn’t usually prevailed for its plot arcs and moments of dramatic heft – largely because, as a series of co-op games, those moments were always likely to be shouted over or missed entirely by a hilarious mate bashing their car into yours over and over again – but it has always found the funny. And here, on a narrative level, it does nothing but. Queen Buttstallion, the town of Brighthoof, the bard who can’t stop playing lute solos, they’re all just there to make you smile.

We should be pretty sick of this formula by now, and it’s testament to the talent of this team that we’re not

As with the original DLC, Tiny Tina’s also prone to major revisions mid-session. The entire environment can change before your eyes in technically impressive and enthralling fashion, depending on what fancies her imagination takes her in. That makes the experience feel totally distinct from the mainline games, and the quasi-Skyrim style questing does the same. Thematically, it all hits the mark brilliantly.

The class system and accompanying character abilities, companions, spells, and melee attacks all work together in creating something different than the usual Borderlands gunfight, too. The archetypes have been used before – companion build, sacrifice health for damage, basic shooty bro, ad infinitum – but their implementation here is irrepressibly fun. 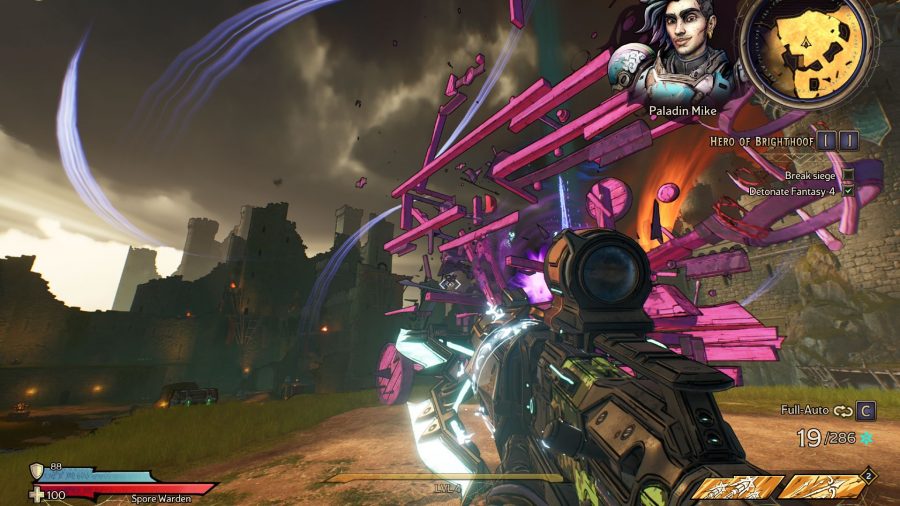 The only real misstep I can’t look past is the Overworld. This isn’t like other open-world games, instead there’s a series of small maps which connect via a depiction of the tabletop game itself. You walk a bobblehead version of your character around on the set, accepting or dodging random encounters like it’s a JRPG, and then make it to your next quest location and get back to the game world proper. It feels like a compromise, like a gaffer-taped solution to something big that the team didn’t have the time or resources to fix. It only really becomes a problem when you find yourself under-leveled for the next proper mission and have to grind out some tedious random encounters. Thankfully, these moments don’t crop up that often.

It’s still shooting at screaming enemies in familiar camps. It’s still watching numbers ping out from their bonces. And it’s very much still about salivating at the shower of colour-coded goodies that disgorge from them as they die. But it’s also a game world I genuinely enjoy spending time in, somewhere between Skyrim and Rick and Morty, somewhere to relax, obsess over stacking class abilities, and catch up with your mates while Tiny Tina cooks up some fresh nonsense for you to explore.

Still recognisably Borderlands, but the sense of place and improvisation elevates Tiny Tina’s Wonderlands beyond expectations. The overworld map feels tacked-on, but Gearbox commits to the bit in every other aspect.