Assembly language is one of the most basic forms of digitised instruction a processor is capable of, sitting just above ‘machine code’ and ‘shouting ones and zeroes at the motherboard’ in the grand programming pecking order.

TIS-100 from Zachtronics is all about constructing a set of commands in a pseudo-assembly language in order to form a basic program that outputs reliably and repeatedly according to a set of instructions the game gives you.

It’s Infinifactory with floating variables instead of crates. It’s SpaceChem with allocated bits instead of ionised atoms, and it’s available in Steam Early Access now.

Zachtronics’ pedigree with the astonishingly good SpaceChem and Infinifactory puzzle games has earned them the curious right to produce a game that looks this unappealing, but while TIS-100 looks like it’s been plucked from a clackety era of 80s computing, it’s rather more similar to the studio’s previous games than you might think. 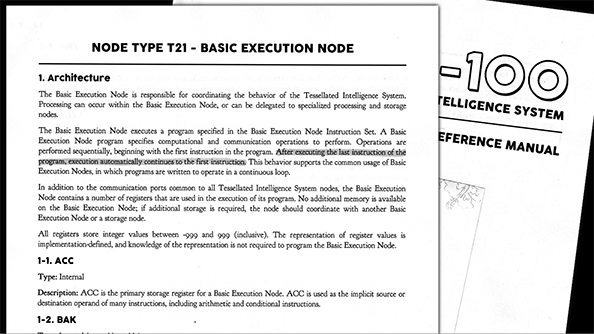 TIS-100 is an interesting experiment in stripping away almost all of the graphical loveliness that’s adorned Zachtronics’ previous games, leaving you with the compelling core nub that sits at the centre of everything their machine-building series of puzzle games. As with Infinifactory, the Early Access version is remarkably playable even at this stage, and development is set to only take a matter of months.

Try it out if you like typing and bleakness and puzzles.