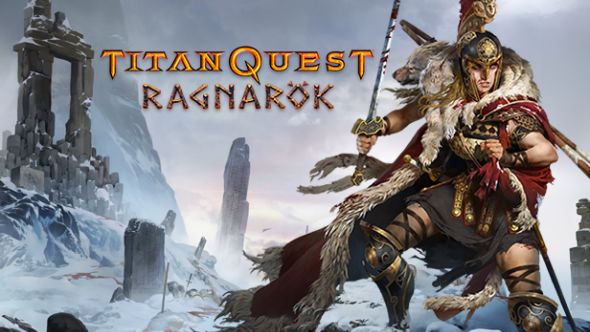 Titan Quest is getting an expansion, adding a loads of new features and an entire fifth act larger than anything seen in the game so far. Titan Quest: Ragnarok moves Iron Lore’s action-RPG from ancient Greece to the Norse mythology of the Vikings.

Check out some of the best RPGS on PC.

In an interview Titan quest’s executive producer Reinhard Pollice said the move from Greek to Norse mythology stemmed from a need to ensure the franchise remained fresh. Pollice says “Titan Quest always had ties to other cultures, so we felt that a new act also needed to feel really fresh, and by exploring a different mythology (that is related to Greek mythology in some ways) we soon agreed that the Norse setting would be great.”

However, the move to Norse mythology hasn’t been seamless, as the game has previously drawn on the extremely well-documented Greek and Egyptian pantheons. Design director Henrik Tornqvist says, though, that “the recorded history of the cultures of northern Europe is not as well-documented as that of their southern counterparts,” and making the Germanic and Norse culture more recognisable was “a large concern during development.”

To counter that, the team enlisted the help of the head antiquarian of the Historic Museum in Stockholm. But Vincent Greonewegen, creative director at the studio, says “most people know aspects of Norse mythology from derived works – like elves and dwarves – but you rarely get to see the originals. But that also means it is still fresh, and we are using every opportunity to introduce the players to interesting aspects of this fascinating culture.

As well as the move to a whole new mythology, Titan Quest Ragnarok introduces a bunch of new features, including a new tenth mastery, allowing players to become Runemasters, magical warriors who fight with both spells and weapons. There’s also a new level cap of 85, new weapons, including thrown weapons that aim for a balance between range and speed, and brand new enemies, stemming from Germany’s dark forests to the forces of Asgard itself.

Even with all of its changes, however, Tornqvist says “our explicit goal has been to remain true to the values of the original game, both in art style and gameplay, while adding some contemporary ‘quality of life’ improvements.” Greonewegen says while “it is always very challenging to make global changes like this to an established system,” years of experience helped the team bring the expansion together in a way that allowed them “to add more of the things people have been wanting – even to existing acts – and enable unexplored possibilities.”

Titan Quest Ragnarok is out now.