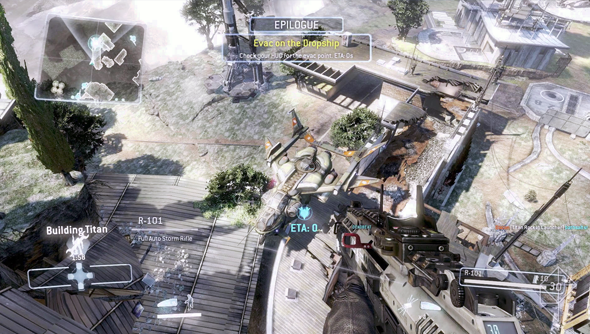 Titanfall doesn’t take place on a single plane. Infantry can double jump and wall run, two skills that, combined, mean they can ascend buildings quickly. This doesn’t come naturally to a lot of players.

“I still watch everybody come in and play it like they’re playing a less vertical shooter,” community manager Abbie Heppe told OXM. “You have to break people in a bit [before they understand].”

“We do tests with random players internally too, so you get that sort of usability feedback […] I still watch everybody come in and play it like they’re playing a less vertical shooter. They come in, they hide behind cover, they pop out and shoot a dude, they run for the next cover. When we play we’re immediately on the walls and roofs, running around like crazy.

“You have to break people in a bit. And then I see them jump into a wall and they’re like ‘oh, I just ran along it’ – and by the end of the match they’re going crazy and playing more like how I would play.

“Even if you tell them, ‘No no no, you should do this’, it takes them doing it themselves to realise that – ‘oh, you really can! Even after seeing the trailers and the gameplay videos we’ve released, you’d think [people would know], but it’s about breaking people out of how they’ve always been playing.”

I saw a lot of this while playing Titanfall at Gamescom. There were a lot of players in our group sticking to the ground throughout the first match. They learned by the second game that that play saw them sniped from the rooftops.