It’s way too early to know what to make of Titanfall. This is a game that has a lot of (hopefully) superficial similarities to other military shooters, but also throws in a few twists whose impact is hard to gauge. Infantry parkour, giant robots, six-on-six multiplayer… right now I’m still getting acclimated to everything that’s different about Titanfall. It’s a game that wants me to take flight across the map with double-jumps and wall-running, and yet I have years of ingrained shooter habits to break before I can truly assess Titanfall’s contribution to multiplayer shooters.

I probably won’t have a completed review of Titanfall until the weekend, but I do have strong first impressions based on my first six hours or so, along with a few misgivings and a few hopes. We’ll be talking about those over the course of the week, starting right now.

When you call down a Titan, there’s a brief moment of waiting before a fiery streak appears in the cloudy skies above, a moment freighted with expectation and worry. Everything could go wrong in this instant between wanting and receiving. Then the war machine crashes to earth, and you sprint into its mechanical embrace.

The screen goes dark, the systems come to life, and then… you’re still the same. A little slower, and a little more clumsy, a bigger target. But that moment of revelatory empowerment never really arrives. War never changes.

This is the flip-side of the blockbuster marketing machine, and the cycles of hype that begin months and years in advance of a game’s release. It becomes harder and harder to separate Titanfall the idea from Titanfall the shooter. This is Respawn’s opening volley after its founders’ unceremonious dismissal from Infinity Ward and exile from the military shooter genre they helped define. This is a game that Microsoft hopes will be a system seller. This is supposed to be a breath of fresh air in a genre that sometimes seems to struggle to find new things to say and do.

So here is my confession: I’m as susceptible to this messaging as anyone, and so my first impressions of Titanfall are tainted by the fact that I expected more, and sooner. I feel a bit let-down, all because Titanfall has yet to prove that revelatory shooter experience that I was hoping for. It should be enough to be engaged and excited by a cool new shooter, but today… it’s not. I’m wondering, “Is this all there is?”

There’s more than just high-expectations behind that feeling, though. Titanfall’s big twists to the standard military shooter formula have yet to prove that they can open up really new styles of play.

Perhaps Titanfall will prove to be a game that you really have to learn and practice before you really use all its systems to their best advantage. But so far, I find that parkour is a great way to draw fire. The human eye is drawn to movement, and I’ve tracked more than a few victims as they zip along rooftops and across alleys. Meanwhile, my best games have come when I scurry to a safe position and rack up unglamorous, cowardly kills from the shadows. 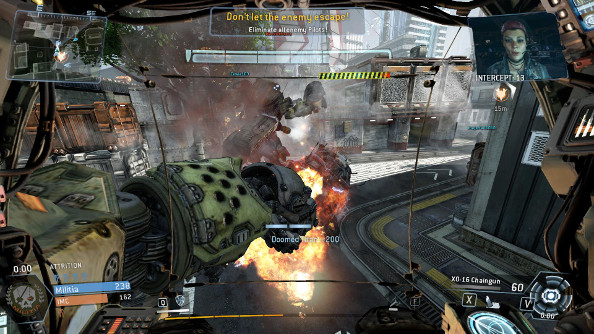 The bigger issue is the Titan itself, which is a little too much of a glass cannon for my liking. In the dense, vertical environments of Titanfall, the Titans are exceedingly vulnerable to… everything. They’re the size of a house, so nobody is going to miss, and everyone is going to see you coming and start blasting away your armor. A lot of the maps also feel a little claustrophobic when you’re riding in a bulky Titan.

Too many encounters turn into single-file slugging matches as another Titan and I trade mechanized haymakers in the street, like two drunks outside a bar after closing. Increasingly, I find myself calling in my Titan out of a sense of obligation. My team needs that firepower to deal with other Titans, and it’s my turn to drive the robot. A couple minutes later, I’m hammered into submission and forced to eject. Then I get back to the game I care about: the run-and-gun. 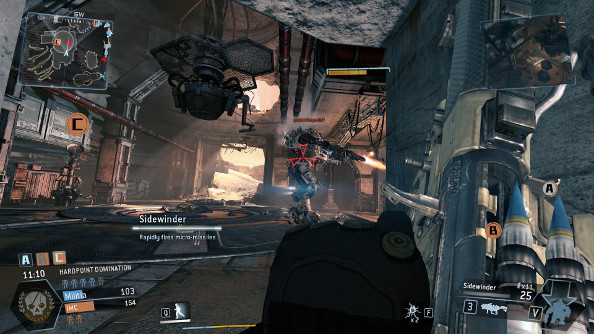 Yet the Titans are what make the infantry combat so memorable. The excitement of Titanfall is not to be found in the Titan cockpit, in the heart-in-mouth dashes across open ground to the next building or covered position. The Titans are not terribly effective killing machines but, like battling giants, a careless shot or stumble can swat you out of existence as easily as a targeted blow.

It must be said: Titanfall works surprisingly well for a launch game. There are some standard PC-port issues, like the fact that Titanfall launches in 720p resolution and, for a couple people in my group, kept trying to reset to that resolution. We also had a few instances where the game just hung on trying to connect to our private lobby as a group. It took a few tries to get all six of our party together without any technical issues. But once we were into matchmaking as a group, we had no trouble keeping the game going.

One of the big questions for me is whether I actually like the fact that Titanfall has filled out each map with lots of AI “extras” who give each battle the feeling of being something larger. It’s very Call of Duty: the AI drones stand there and take ineffective shots while the players mow them down. It re-introduces some of the problems of scale that bedevils games like Planetside 2 or Battlefield, and doesn’t really add a whole lot in return. The cannon-fodder enemies make the action look a little more exciting, but they’re also a distraction from the human competition. 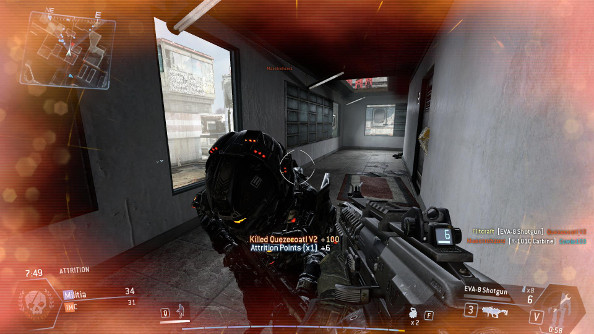 Thematically, they need to be there because Titanfall is telling the story of the militia’s struggle to free itself of the IMC but I’m halfway through the militia campaign and I honestly have no idea what the hell is going on. While 11 other people and I play a multiplayer mode, usually territory domination or team deathmatch, my radio is filled with voice actors yelling at each other about a political and military conflict that is never adequately established. The campaign is not really the main event in Titanfall, but it seems like a missed opportunity to do some multiplayer storytelling. Instead, it feels like the shooter equivalent of Rosencrantz and Guildenstern are dead without the crushing self-awareness.

But these are all first impressions. The real test, for me, is whether I can actually get good at this game. The test for Titanfall is to show whether it offers deeper rewards for the people who get truly proficient with the movement system and customizable loadouts.

Right now, however, all I can think is that Titanfall is a good shooter in a world that’s full of them. Great to play with friends but, really, what isn’t?