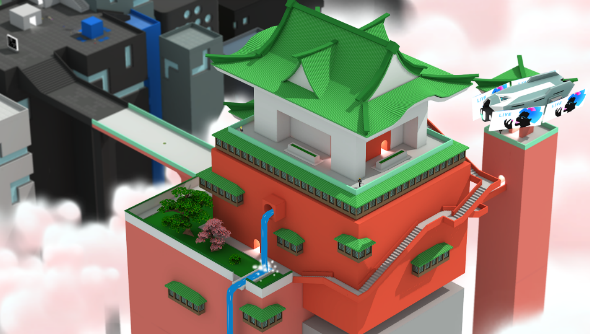 Prefer your shooters from another angle? Here are the best FPS games on PC.

Maybe you’ve seen some of these brightly coloured city dioramas in screenshots from EGX or elsewhere, Tokyo 42 is the first game published by Frozen Synapse developers Mode 7 and is an actiony stealth platformer.

The tilt-shift aesthetic, shown from an isometric viewpoint but can be rotated to aid with lining up jumps, gives a good overview as Mode 7 founder Paul Kilduff-Taylor walks you through the opening stages.

There’s a singleplayer campaign, with the tutorial Paul goes through, as well as what sounds like an intriguing multiplayer game as you attempt to blend in with the copious on-screen NPC crowds while picking up weapons and ammo to do a big shooting.

It seems a lot of the platforming and stealth and action elements allow you to approach missions from a variety of playstyles, so think of it as a miniaturised version of Deus Ex.

There’s a lot to like in the game’s design, a large temple looks a lot like the bath house from Studio Ghibli’s Spirited Away while a lot of the team’s gameplay inspiration comes from Syndicate and early GTA.

Here’s the gameplay so you can see for yourself: