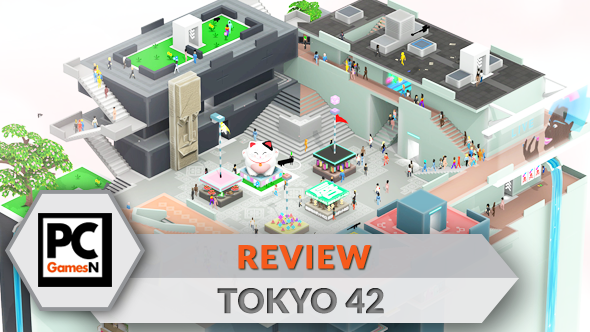 You awake in your miniscule, boxy flat to a breaking news report about an assassination. Police are closing in on the killer’s building; the news channel say they’re going live to a camera within the assassin’s apartment. The TV screen shows a cell-like room illuminated by a TV – moving around confirms that it’s your apartment.

Moments later, you’re bolting down a street ducking between pillars to escape the barrage of bullets threatening to envelop you. There’s a hover car waiting for you at the end of the street that you obligingly leap into. The driver, Tycho, explains that you’ve been framed for murder by an unknown assassin, and that you’re now at the very top of Tokyo’s most wanted list.

For more open-world goodness, check out the best sandbox games on PC.

Whatever grain of sobriety there is in Tokyo 42’s dramatic opening quickly diminishes. Set in the year 2042, its vision of Tokyo sees it sat above the clouds, leaving behind whatever grim apocalypse lies below. The city’s inhabitants are happy to live surrounded by blue skies and to forget the past. You will be too, as you tear across its colourful high rises, the experience soon becoming a joyous blur of robotic tabby cats, freely-wandering nudists, and brazen pop culture references. What were you running away from again? 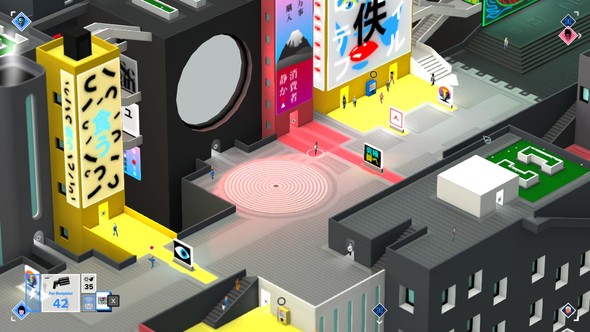 But it’s not all smiley faces and holding hands. Various factions and corporations control the city: punks, suits, mini-golfers, factory workers, and religious fanatics – all the usual suspects. The vast majority of the city’s population are also on NanoMeds™, a subscription pill that grants immortality to those who take it. Naturally, there are some side effects, but I won’t spoil that for you. Your job in this fragile utopia is to work your way up the city’s criminal hierarchy, earning the trust of faction leaders and assassin handlers to find out who framed you.

There’s nothing original about the parts that make up Tokyo 42, but the finished product is fresh and imaginative. There’s the rotatable isometric viewpoint of Fez, the simple open-world and mission structure of the original Grand Theft Auto, and tactical combat that’s somewhere between bullet hell and real-time cover shooter, with some Worms-esque unpredictability for good measure. Its world shares the same corporate near-future and assassination-driven economy of Syndicate. The protagonist suffers from a case of the one-hit kills, so as we’re on a roll, let’s name-drop Hotline Miami too. Then there’s the stealth, which is equal parts Metal Gear Solid and Assassin’s Creed: Chronicles. As for the motorbiking? That’s anyone’s guess, but the haphazard controls suggest it’s in there for the sake of it.

It’s a staggering number of influences and mechanics to juggle, but nothing feels out of place. Missions can be tackled in one of three ways: loud, quiet, or quiet followed by loud. Playing ninja is all about avoiding vision cones and studying patrol routes. Going loud requires an equal amount of care and patience, as you carefully navigate cover and agonise over when to pop out and return fire. Thanks to the slow-moving bullets, distance is always your friend in a firefight; facing off against a single foe in close-quarters is much deadlier than fighting a group in an open space. 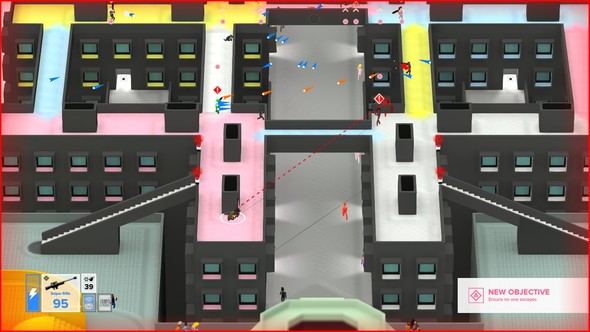 What you’ll quickly learn is no shootout is ever predictable in the concrete jungle of Tokyo 42, with its abundant sources of cover, multiple levels, and teleporters that allow enemies to instantly move between rooftops and sidewalks. Enemies will rout you with grenades, ensuring there’s never a safe place to hide. Out in the open, you’re just as likely to get caught between two snaking lines of machine gun fire. If you’re playing aggressively and eschewing stealth entirely, you still need to play smart – as well as being bold, you have to think spatially and tactically.

Your best bet during combat is to stamp your mark on a given area, whether that’s by pushing enemies back with minigun fire and grenades, or recycling the same few bits of cover and waiting for the enemy hordes to come to you. You’re always going to be outgunned and outmanned, which makes eking out a foothold under pressure enormously satisfying. The bullet hell influences also mesh perfectly with the flowing verticality of each area – leaping down to a lower walkway as a hail of bullets whizzes by overhead never gets old – and there’s no shortage of available routes if you need to temporarily duck out of a fight.

The rotatable perspective can be tricky to handle, however, especially in tight spaces where nearby skyscrapers obscure your view. This forces you to constantly adjust your camera during fights to give yourself the best view of the action. These shifts feel natural in Tokyo 42’s stealth and parkour segments, where turning the camera is essential for seeing what’s around the corner, or assessing the distance of a jump. But in combat this mechanic can be unwieldy, especially in confined spaces where only one of eight potential viewpoints allows you to see where you even are. It adds a barrier to play in a game that’s generally very accessible, and can lead to undue frustration as you rapidly spin the camera around only to discover you’ve been running into a wall for a few seconds, and are then engulfed by a haze of bullets. 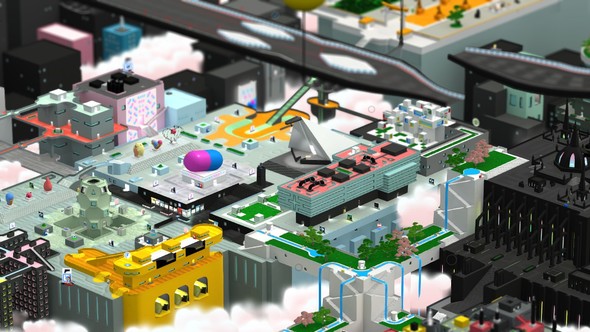 If you’re not up for dancing through projectiles, stealth is just as effective, if a little pedestrian. Where the free-flowing combat feels right at home with the game’s level design, there’s nothing novel about a stealth approach save for the ability to briefly change your appearance to match the gang you’re infiltrating. It’s a welcome nod to Linklater’s A Scanner Darkly, but it’s far too situational to warrant more than a handful of uses over the course of the game’s main quest line. Similarly undercooked is the TrackaCat™, a deployable feline that sniffs out rival assassins – while cute, it doesn’t have much functionality. Stealth also restricts you to an arsenal of melee weapons, though there is a suppressed gun to unlock if you complete enough missions without raising the alarm. The lack of fall damage can also be a handy tool when infiltrating strongholds, letting you drop down from great heights, kill an enemy, and disappear just as quickly. Tokyo 42 is an effective ninja simulator, but it really springs to life when the screen fills up with bullets and explosions.

It’s a testament to Tokyo 42’s art style that even its stellar gunplay can’t match the initial impression made by the city’s pristine aesthetic. Tokyo 42 is utterly gorgeous. Bold, isometric lines carve out a maze of shimmering colours from every vista. Scant patches of vegetation, look almost alien against the immaculate backdrop of white and grey skyscrapers. Every nook and cranny of the cityscape looks as if it was inspired by architectural models, right down to the ant-sized pedestrians going about their daily business. It’s backed by a predictably lush electro-pop soundtrack, which is a pitch-perfect accompaniment to Tokyo 42’s summery visuals.

While the dreamy urban sprawl isn’t particularly big, with an abundance of teleporters ensuring you don’t waste a second getting around, there’s an extraordinary amount of depth packed into this miniature open world. In fact, it might be the most vertiginous sandbox I’ve ever encountered. There’s always more to an area than first meets the eye. Central hubs and main streets draw you in, but there’s often a level above these areas made up of suspended walkways, rooftops, and cars you can leap onto and ride to the next skyscraper over. 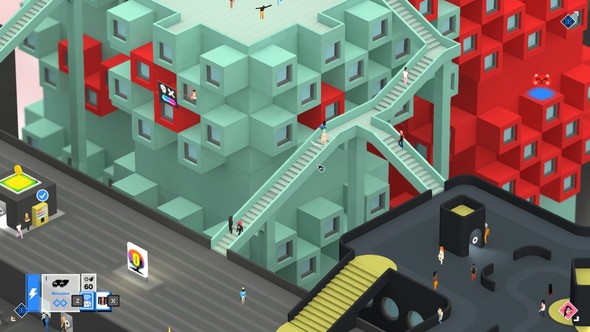 The dominant high-rises call to mind Hong Kong’s Kowloon Walled City, but everything in Tokyo 42 is too light and airy to allow such a comparison. There’s a distinct clash of influences battling away at surface level, nods to science fiction’s bleakest urban dystopias, except here everything’s been made immaculate. After all, the citizens of Tokyo 42 are immortal, they live a perfect existence above the clouds; all that’s missing are the proverbial pearly gates. Its expansive range of interconnected heights is why exploring the city is never a slog. Even after 15 hours it still feels like you’re far from exhausting its sights. When you do begin to feel like you’ve seen everything an area has to offer, all it takes is a swift change of perspective to reveal a staircase or ledge you hadn’t seen before.

Exploration is incentivized, too, with a number of collectables dotted around the game world, ranging from new coats to different fur patterns for your nemesis-tracking cat. None of these items are useful, but rampaging through a gang stronghold feels so much better when you’re wearing a rainbow duster. It’s a serious and silly place all at once, which makes it an ideal backdrop for a game where you can swap a cluster bomb for a bunch of bananas. They don’t do anything, in case you were wondering, they just lie there on the floor, waiting for you to come to terms with the fact that you just spent a few thousand yen on some potassium-rich fruit.

Despite its challenging combat, Tokyo 42 is a game that invites you to mess about and play it as you wish. The very first target you’re given is a key member within a gang of mini-golfers, and if you want to, you can literally just walk up to him and blow his brains out. There’s no pressure to come up with an elaborate plan of attack or parkour your way up to a vantage point. That first hit sets the tone for the rest of the game. Tokyo 42 is more than accommodating if you want to treat it as an assassin simulator, but it won’t so much as shrug its shoulders if you’d rather sprint towards the target lobbing grenades at everyone in sight. Likewise, If you go in expecting a compelling narrative or weighty themes you’ll probably leave disappointed. 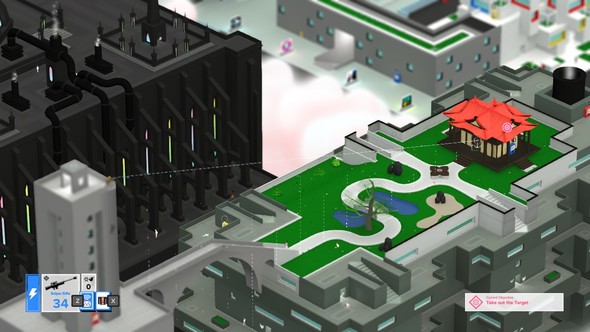 There is an Assassin’s Creed-like multiplayer mode where two players face off in tiny maps, striving to blend in with the throngs of pedestrians while trying to spot their opposite in the crowd. Unfortunately, due to this review being written pre-release, I haven’t been able to find a game and so cannot comment on its quality. I’ll update this section of the review once I’ve managed to get a few matches under my belt.

I enjoyed almost every minute I spent with Tokyo 42. Few games feel so immediately and consistently inviting – there are no penalties for pissing about in this urban utopia. You don’t even have to feel bad about killing civilians, as they’ll simply flicker back to life once you’ve ended your shooting spree. It’s a remarkable shooter, a solid stealth-‘em-up, and a terrible racing game. It’s also a looker, and while the majority of interest surrounding Tokyo 42 has revolved around its mesmerising visuals, they’re eclipsed by the quality and depth of its world design and gunplay.