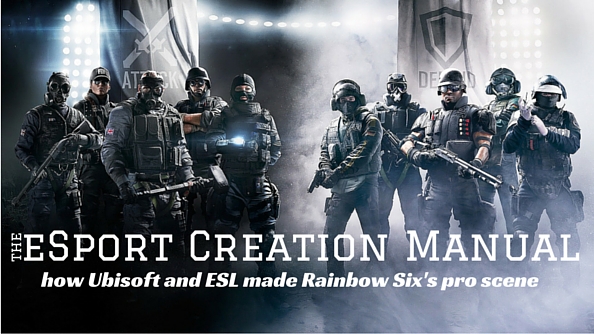 From the moment it was conceived, Rainbow Six Siege was always aiming to be a competitive eSport. That ambition is in its very mechanics. But being a multiplayer game is not enough to assure success in the digital sports arena.

Training up to be the best player? The best FPS games on PC are your own personal digital gym.

During a trip to Cologne to see behind the scenes of Rainbow’s Pro League, we discussed the creation, players, and growth of Siege with Ubisoft’s Alexandre Remy and ESL’s David Hiltscher, in hope of discovering the secrets behind making an eSports success story. 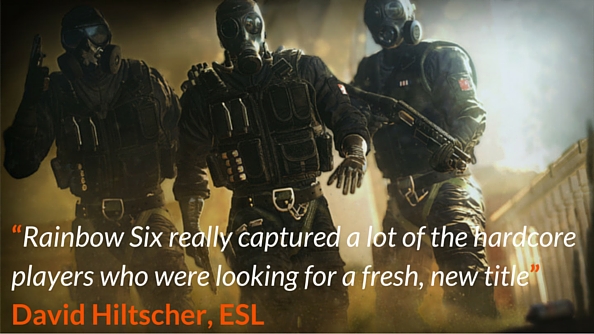 The first necessity for having a great pro scene isn’t much of a secret: you need a good game. Aiming for eSport standards is what made Siege as good as it is, claims Ubisoft’s Rainbow Six brand director Alexandre Remy. “One of the aspects that we all agree on is when you do aim for a competitive game, it brings a level of discipline in the design mechanics and the tech that ensure that you have a game that’s as solid as possible in its foundations,” he explains.

David Hiltscher, vice president of gaming communities at ESL, believes Siege’s unique gameplay has ensured it a strong appeal. “Having a slower-paced, team play oriented tactical approach, with the right spectator tools to showcase that team play, is just amazing,” he says. Counter-Strike operates at a very different pace, Hiltscher continues: “It’s so much twitch gameplay: hitting the guy in the head or not hitting the guy in the head. In Rainbow Six it’s not just about that. It’s about treading off the beaten path and saving strategies for eSports events.”

It’s also a game with remarkable depth for a close-quarters, 10-player FPS. “I think for pro players it’s always important that the game has depth – that it’s easy to learn and hard to master,” says Hiltscher. “Rainbow Six is a technical FPS combined with slower paced, objective-based gameplay. We haven’t really seen that combination so far. That really captured a lot of the hardcore players who were looking for a fresh, new title.”

Collaborate with the pros 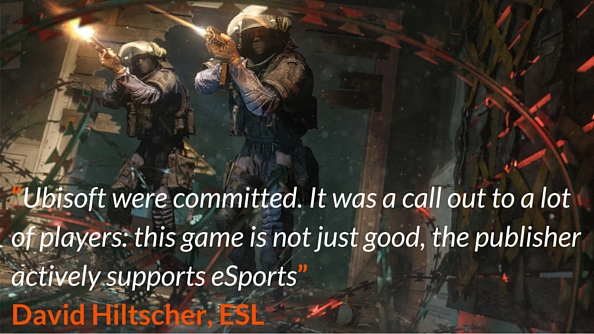 Siege started its Pro League early, just one month after launch. It was an accelerated transition that Ubisoft baked into their game by deciding to collaborate with a major eSports organisation during development, rather than afterwards. The organisation in question was ESL.

It was a collaboration that was incredibly easy for both parties. “With some other games we’ve had to start explaining some very basic things to developers, but that was fortunately not the case with Siege,” says Hiltscher. “There are so many eSports nuts at Ubisoft Montreal, they know a lot about it. We just helped them sort out the important stuff from the less important stuff.”

“We were able to give a lot of feedback on the spectating and casting tools. There’s been quite a few changes to the servers that were made after our feedback. For example: the ability to play custom matches on dedicated servers. That was the big thing for us that Ubisoft weren’t really aware of,” he reveals.

If you’re going to do eSports, you need to make that goal your all. Hiltscher was impressed by Ubisoft’s dedication to it, and believes that’s the reason why it’s seen success so quickly: “Ubisoft were committed to eSports and launching the Pro League with us. It was a call out to a lot of players: this game is not just good, the publisher actively supports eSports. I think that was tremendously important.” 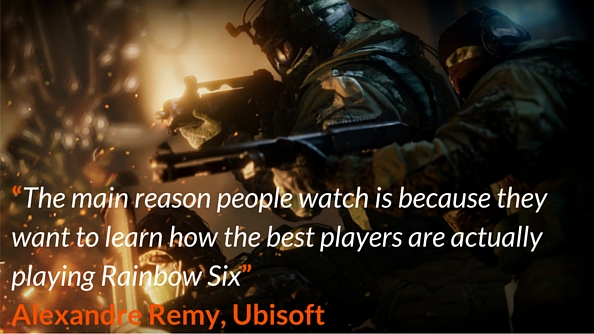 Getting your game out the gate and a league set up is only the start, though. For Rainbow Six Siege to survive as an eSport, it needs to remain popular as a game.

Ubisoft have a very keen eye when it comes to their player graphs. “There’s no day or week that doesn’t pass by where we’re not looking at the numbers. If there’s a dip you’re like ‘Oh my god, is that the beginning of the end?’” laughs Remy.

He recounts a time from a few months back when The Division launched. “There’s a moment on our graphs where player numbers go down, and it was actually when another Tom Clancy game came out. Obviously players are going to jump on other games, they’re not going to be faithful to any game. But what reassures us a lot is that after that drop it did cool, and we keep seeing the graph going up a little bit.”

With Siege having a dedicated player base, it naturally helps draw in a solid audience to spectate it as an eSport. “We’re talking about a core audience that’s already engaged. I believe the main reason people watch is because they want to learn by looking at how the best players are actually playing that game,” explains Remy. “They want to know which operators or team compositions the pros use, which defence or attack they’re building, what entry point they create. It’s the information needed for you to get better.”

For as long as the Rainbow community remains active, they’ll want to know how to get better. The two sides of Siege fit neatly together, like a explosive jigsaw puzzle pieces.

Attract a different breed of player 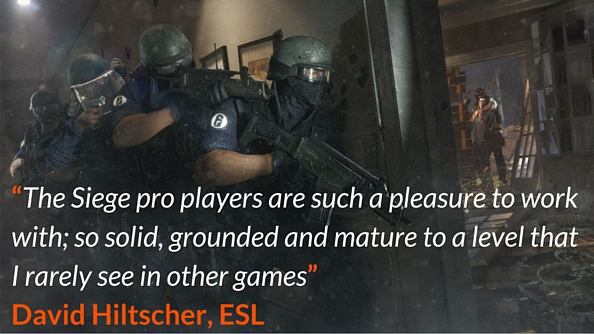 Ubisoft have discovered something interesting with Siege: it attracts more mature pro players. “Our players are around 23, 24, which is slightly older than other competitive scenes,” reveals Remy. “We’re the ‘tactical shooter’ so I guess that aspect of tactics and strategy tends to appeal maybe to an audience that’s a little less about twitch and reflex shooting and more about strategy. That may appeal to an older audience”

Having a pro scene made of older players has been a massive boon to both Ubisoft and ESL. “We’re often doing workshops and feedback with the pros and having a little bit more mature player gives us very articulated and educated feedback, so it’s for us a benefit,” says Remy.

Hiltscher agrees: “It’s always better to deal with player who are in their mid 20s. They are more level-headed, if you explain something to them they will have more life experience to understand what you are saying when something goes wrong,” he explains. “Some of the kids in other games are really really tough to work with. The Siege pro players are such a pleasure to work with; so solid, grounded and mature to a level that I rarely see in other games.” 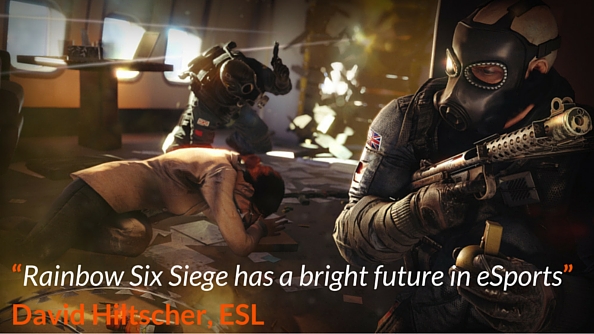 Quite a few genres allow for generic rulings, but Rainbow Six proved a challenge to ESL. It required a different approach from other FPS games. “For Rainbow Six the biggest challenge was to find the rule set, like how long should rounds be,” explains Hiltscher. “We went with three minutes and we’re currently looking to tweak that and strike the right balance: how many rounds are played on each map, how the overtime system works, because it’s an asymmetrical game. Those were the challenges for Rainbow Six, but those were the fun parts.”

A good start is vital, but the lifeblood of a living, breathing eSport is continued support. Remy explains how the pro scene is making Siege better by identifying elements that break it: “Pro players told us that when it comes to professional matches they didn’t want to use more than one or two shields. If you have a team with three or four shields then all of a sudden it’s a very powerful strategy that you can build. So we had to nerf some of the shield operators and find new mechanics,” he recounts. “So if you do melee now the shield opens its guard so you can shoot the operator. There’s a couple of things where players are really pushing the game to frontiers where we haven’t thought of.”

Hiltscher has been impressed with Ubisoft’s continued support and believes it’s vital to the game’s success in the pro sphere. “Ubi is still fixing the servers, improving the matchmaking, bugs get fixed immediately,” he notes. “Communication is great on Reddit and there is so much transparency going on. They are all key components for people to have a sense of security and longevity that makes them invest their time.”

“They are very conscious of the meta, so they are looking with each new content drop to change up the meta and give new variation,” he adds. “Having that mindset on the publisher/developer side for us is great. We don’t have that in a lot of games, especially boxed products that are shipped. It gives the game a bright future in eSports.” 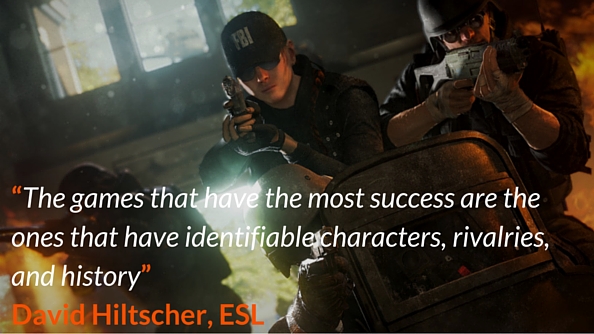 With the first two seasons of Siege’s Pro League having been successful, the focus now clearly needs to be growth. You don’t become Counter-Strike or League of Legends without trying. Hiltscher warns that the road may not be smooth, though.

“With CounterStrike it took a long long time to now be at the stage now where we know it will be around three or four or five years. If I go back just three years, we removed CounterStrike from our pro competitions and it looked to be the end of it,” he recalls. “Nobody was really sure what would happen.”

But Hiltscher believes Siege has an appeal that can endure. “Hopefully we’ll reach the point where we just know that Rainbow Six will continue to exist, because it does have the endearing game mechanics, it does have the depth,” he says. “Every new operator changes the meta, so in general I think people do understand that the game is being not just kept alive but actually being added to.” 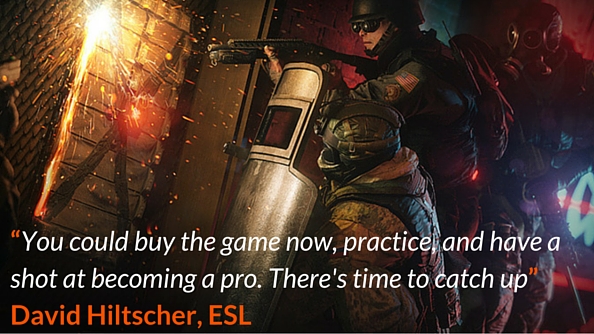 As for the ESL, they too have a duty of care for Rainbow Six that will help build the scene. “We’re looking to have more of these Pro League events and bring the finals to a wider, live audience,” explains Hiltscher. “We’d like to slow down the season structure to give each play day a lot more room. We got a lot of feedback from players, there are a few tweaks we need to do to make the league content and matches a bit more attractive.”

“We also want to work more on player storylines, putting these guys out more – some of them will be on camera for the first time in interviews this weekend. We want to develop more of the stories around the players,” he adds. “We see that the games that have the most success are the ones that have these identifiable characters, rivalries, and history.”

Potentially the characters who will define the Siege pro scene have yet to emerge from their homes. Indeed, the next big star could even be you. “The game is in its early stages. You could buy the game now, practice, and have a shot at becoming a pro. It’s not like these guys have been playing for ten years, they’ve been playing for six months. There’s time to catch up,” claims an enthusiastic Hiltscher.