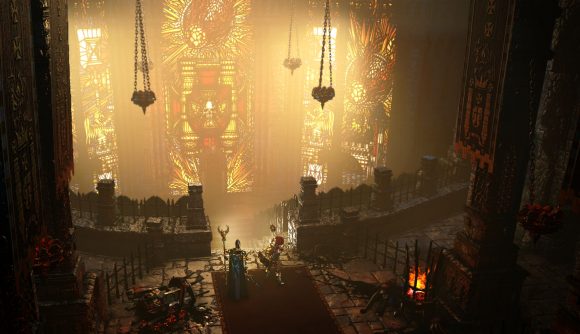 February 2, 2019 This story has been updated with further comment from Warhammer: Chaosbane’s game director.

Once upon a time, Warhammer games were pretty uncommon. Since 2014, there’s been a flood of them, and while some of those games are good, they’re not all up to the standards of titles like Total War: Warhammer 2. It remains to be seen which side of the line Chaosbane falls on – we are, as always, hopeful for one in the ‘good’ column – but the developers at Eko Software tell us that Games Workshop is aware of the reputation Warhammer games have gotten, and the company is trying to change it.

Game director Jean-Georges Levieux tells us “It wasn’t so hard” to get the Games Workshop license, but “I think the harder part was to convince them that we could do a good game. I think they are aware that they have done some not very good games.”

It seems Games Workshop isn’t satisfied with that state of affairs. “They are trying to change this. They are trying to find good developers to work with them and to make sure that the game we will do is good enough. So, yes, we have to prove that we can do a good game. You saw How to Survive which was a success and was helpful to convince them. But we had to present to them a game concept, a full design document explaining what we wanted to do and how we were going to do it.”

The fact that the folks at Eko are big fans of classic Warhammer setting might’ve helped, even if that’s not the Age of Sigmar content that Games Workshop is currently pushing hardest. Thomas Carpentier, product manager at publisher Bigben, says the team “wanted to keep the Warhammer fantasy battle universe so they asked precisely to Games Workshop, ‘No guys, we want the old one’ and Games Workshop finally agreed.”

Carpentier adds that this has made it not necessarily “complicated” on the marketing side with Games Workshop, but “sometimes we ask them to do us a favor and they are like ‘Hm, I don’t know, I’m not sure. Age of Sigmar is the one we should put forward.”

Level up: Check out the best RPGs on PC

We saw a bit more of Chaosbane with some Dwarf Slayer gameplay, and so far it seems that this take on Warhammer is shaping up well. Hopefully it signals a broader move for the Warhammer license to be handled with more care going forward.

Update: Chaosbane game director Jean-Georges Levieux has been in touch to add to his comments. His statement follows in full.

“Some of the quotes from this article may be confusing and suggest that EKO Studio and Bigben are downplaying the work of other studios working with the Warhammer license, or that some ages within the lore are less appealing.

“We wanted to assure PCGamesN readers this was not our intention. We respect and understand the amount of hard work and passion that goes into creating games based on the rich Warhammer universe.

“Additionally, all the members of the team are great fans of each of the game’s eras. We’re honored to have the opportunity to provide our take on part of this rich tapestry with Warhammer: Chaosbane.”