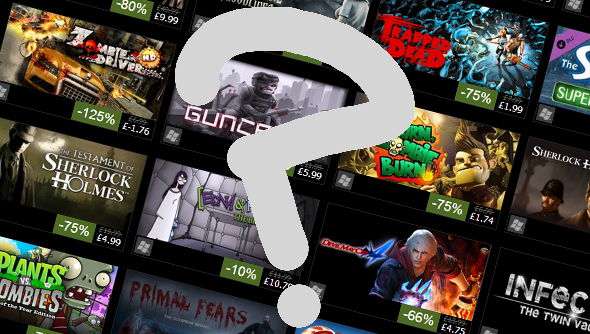 Seasonal sales and bargain bundles, while being great for those of us who are skint, have changed the value we place on games. When you can get a AAA game for a tenner within the year it launches or an indie game for the cost of a fast food meal, the £40-£50 release price of some games starts to look astronomical.

For our Topic of the Week, we want to know what a game’s worth to you in cold, hard cash. What’s the maximum you’ll spend on a game? Are you happy to chuck £100 at a super duper extra deluxe special edition? Or will you only open your wallet for games that are less than £30?

It’s a bit strange with PC games. They tend to be cheaper than their console counterparts, even when it’s the same game. Rather than make me place less value on a PC title, though, it just makes me wait a little longer before I pick something up for one of my consoles, so it drops in price.

I’m not one for special editions, though offer me a cloth map and I will throw money at it, so I rarely drain my wallet of more than £30. I have such a vast backlog, that it’s hard to justify buying something at full price when I know I won’t have time to play it for a couple of months.

I’m not above spontaneously splashing out, though. Sometimes a game launches and I know that I’ll be buying it instantly, regardless of price, because I’m not immune to getting excited about things. It’s hard to slap a price on something that provides dozens of hours of silly entertainment or even just an hour of fascinating mechanics or a cool story hook.

Alright, what about you lovely lot? What’s the maximum price you’d pay for a game?