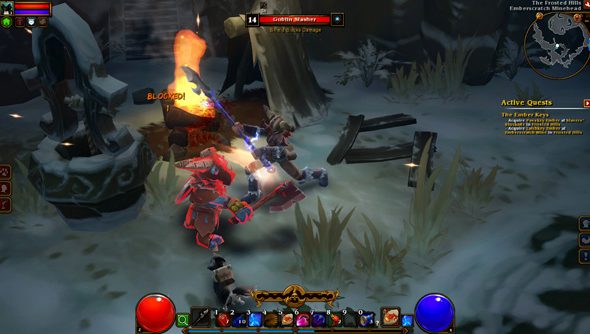 There’s something of the underdog about Torchlight 2. When you’re standing in the shadow of the Diablo franchise, you’re always going to look like David against Goliath. So it brings a warm fuzzy feeling to know that Torchlight 2 is well on its way to being a solid success. Last night it reached the top 2 on Steam’s concurrent user list, with over 54 thousand players.

The only game that beat it was the Dota 2 beta, and that was only at 70 thousand at the time, not too far ahead. Since then Borderlands 2 and Team Fortress 2 have pushed it back down, but it’s sitting on a no-unrespectable 24 thousand right now. That’s especially impressive due to half the world being either asleep or stumbling around work right now.

Here is a graph showing you exactly how quickly it shot up. Orange is Dota 2, blue is Team Fortress 2, red is Borderlands 2, and green is Torchlight 2. If you squint, the oscillation is kind of like a school of whales gently meandering through the sea. Such success hasn’t been without casualty, though, and the authentication servers for the game, which handle all the logging in so you can play on the internet, were down most of last night, although they have since come back up. However, in stark contrast to Diablo 3’s dreaded Error 34, Torchlight 2 allows you to play both over LAN or offline, in single player. So the only thing you were denied was playing coop with friends.

On launch night, I think I can live with that. If you want to know a little more about Torchlight 2, Steve’s been frothing at the mouth and raving about it for the past few days. We think he might need to see a doctor.