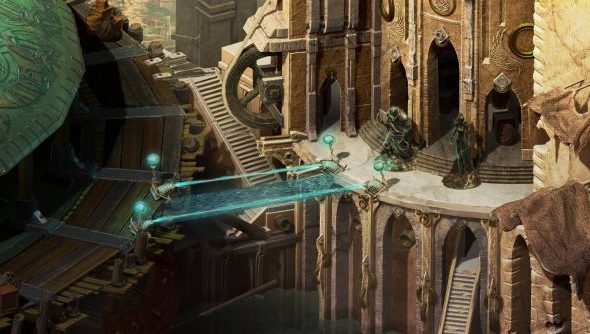 Skip the first eight, and head straight for the Ninth World: here the setting of Torment: Tides of Numenera is shown to be technologically fanciful, unnervingly organic, gravitationally unorthodox, flamboyantly colourful, unbothered by the boundaries of science-fiction and fantasy. Oh – and unendingly isometric.

InXile might be eyeing The Bard’s Tale IV in their peripheral vision, but the bulk of the studio have their lenses focused on finishing Torment. The spiritual sequel takes Planescape’s philosophy and anything-goes ethos to a new universe.

I love the idea that InXile would cherry-pick a clip of a man swinging a sword at a stationary target, only to be met with the word ‘Miss’. There is nothing about that vignette that should be exciting, and yet it is, because it invokes the tabletop-indebted work of classic Black Isle.

InXile have promised that The Bard’s Tale IV won’t delay Torment, which is expected to rides its numeneric wave onto PC, Mac and Linux before Christmas. Will you be ready for it when it comes?