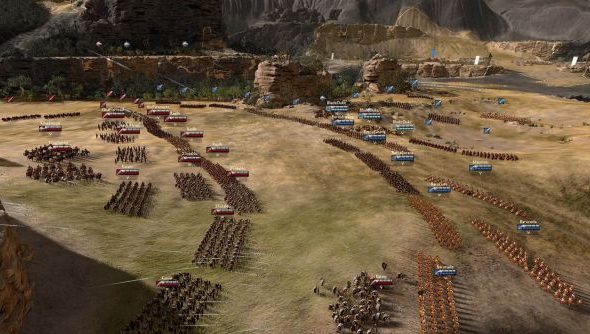 Total War: ARENA, Creative Assembly’s foray into free to play multiplayer, is something we’ve enjoyed a few times in chet PCGN. Fraser and Tim both enjoyed their plays of the game in various pre-release states. Now it’s had its official US beta launch with the addition of servers in that part of the world, as well as a new trailer that shows off everything currently in development.

Win some Total War: Arena goodies in our giveaway.

The Alis Graia map is now available to all players in the closed beta, which you can still sign up for. According to the press release, it has more diverse terrain than other maps and therefore allows for more army options. It’s also harsh and cold.

The celebrate all this, there’s a livestream from the ESL studios in Burbank, California kicking off at 15:00 PST, or in about half an hour. You can tune in on the Total War Twitch page. Players in Mexico and Canada should notice significant improvements in ping times too.