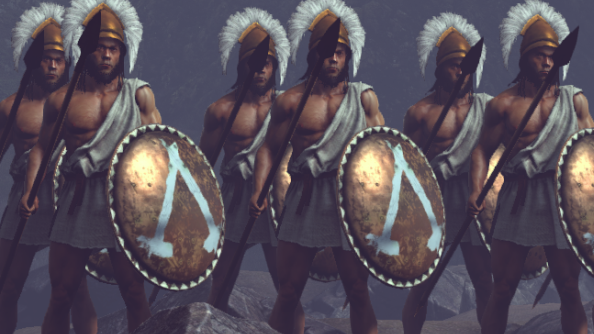 Blessed with the most buoyant and merry title in the ancient world, hoplites were presumably nothing of the sort, having been conditioned from the age of seven for a life on campaign and drilled ever since for disciplined combat. Just look at them standing there: separately animated as modern Total War soldiers are, and yet not a single smile among them.

Their pain is your gain, however: we’ve got 100 fourth-tier units of Spartan’s highly-disciplined best ready to be pressed into your service in Total War: Arena, plus a bunch of in-game gold for good measure as the game enters closed beta in the US.

If you’d like one, you’ll want to play around with the widget below. Visit our homepage, follow us on Twitter – with every option you choose, the chances of finding a code in your inbox increases. That code can then be redeemed for a bunch of sweaty, capable Greeks. We promise not to use your email for anything other than this very competition.

Remember to Like us on Facebook if you want to hear about future giveaways. And that’s all you need to know. Hop to it.