A game’s mod scene is like a fine wine: it becomes ever more refined with age. As such, it makes sense to step back from the hustle-and-bustle of Creative Assembly’s newest release and take a look instead at what’s available for the studio’s other mainline historical strategy games. One of my personal favourites in the series is Total War: Attila, and it’s great to see how its mod scene has fermented in the years since release.

When I was younger, I used to believe that a game was complete when it came out of the box. Then one day I stumbled onto the mod scene for Total War: Medieval II and ever since then what was once sacred has become profane. Now, I shout the praises of great mods from a megaphone and expect that mods will undoubtedly extend the life of many of my favourite strategy titles well past that of the vanilla version.

Total War: Attila may not be the best loved out of all the historical Total War games, but it did set the stage for things to come in the Total Warhammer fantasy line. Let’s take a look at some of our favourite user modifications.

These are the best Total War: Attila mods: 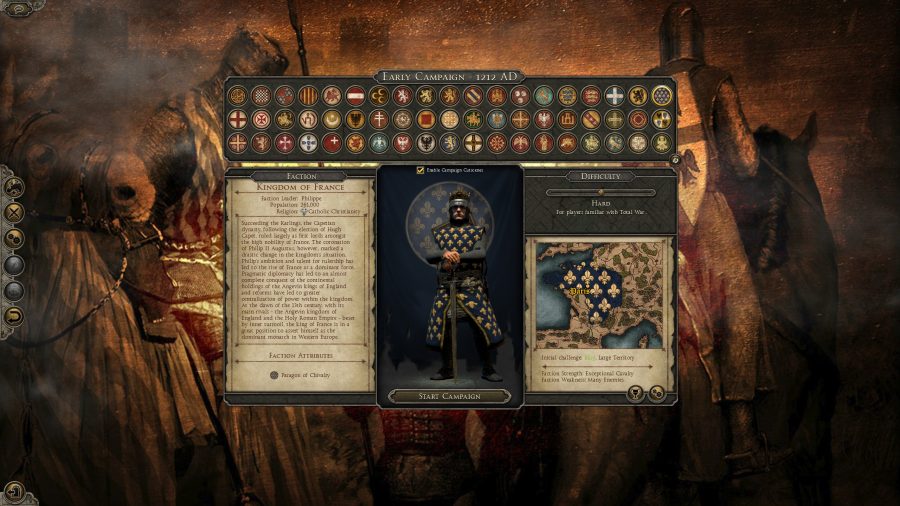 This mod was flagged by one of our readers, and it’s currently ranked fifth out of all of the Attila mods available via Steam Workshop. It sets the start-date nearly a thousand years later than the vanilla game, right smack in the middle of the time frame Crusader Kings 2 covers. It features 57 playable factions with thousands of newly crafted units for the era along with custom building chains and single-region provinces.

It’s currently in Alpha so there’s a lot that hasn’t been implemented yet. You can read more about it here, but you’ll need to subscribe to this collection to get everything working properly. 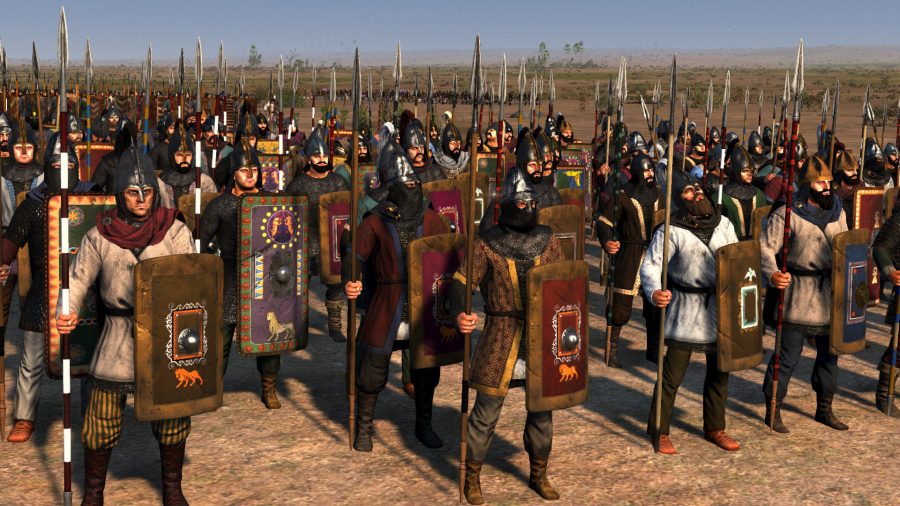 Fall of the Eagles

Fall of the Eagles is one of the most comprehensive and popular overhaul mods for Attila. It adds new unit reskins and models for several factions, and adds some significant changes to the garrison, climate, and battle systems. Like the previous entry, battles are tweaked to be a bit longer, though there is a compatible sub-mod that allows for faster combat while maintaining the balance system, for all of those, like me, who are more concerned with the strategic than the tactical.

Changes to the political system, climate change, and army integrity make for a slightly more challenging experience. So if that, coupled with some more realistic and historical-feeling battles and unit models, sounds good to you than Fall of the Eagles is worth a try. 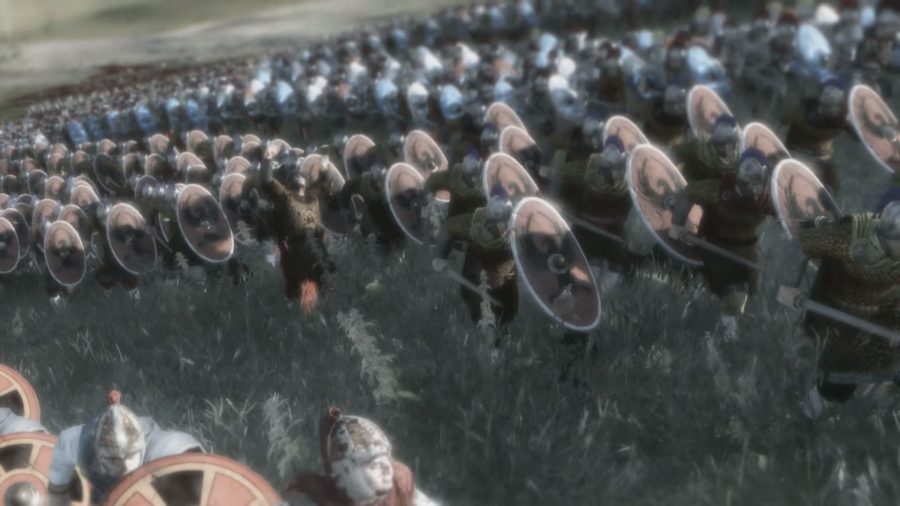 If you are familiar with recent titles in the Total War series you have likely heard of Radious overhaul mods, and for good reason. Radius and his team have made a name for themselves in the Total War mod scene with some extremely popular overhaul mods for both Shogun II and Rome II. The reason for this success: an ability to tap into the communities grievances, rectify them, and package it all together as a single comprehensive experience —  an absolutely enormous labour of love.

For Attila, this takes the form of a complete economic overhaul that changes everything from unit upkeep to public order to religion, as well as a top to bottom redesign of every unit’s stats in order to tweak the battle system to adjust the balance of combat.

This results in longer and more tactical battles, which have always been the real meat of the Total War series. If you decide to pick this mod up, you will also need to install the Radious Total Units Mod as well in order to get the full unit roster. There is a reason these two mods are the top two most subscribed items on the Total War: Attila Steam Workshop. You owe it to yourself to not settle for vanilla.

One of my recurring pet peeves with the Total War series is with the consistent rigidness of the campaign’s camera. Creative Assembly never seems to let it go as far back as I’d like and it constantly seems stuck at an awkward angle that doesn’t give me the strategic perspective I’m looking for. The Olympian Campaign Camera seeks to resolve this by adding some much-needed flexibility to the strategic view, allowing the camera to pull a bit farther back and a bit closer to ground level.

This doesn’t solve all my camera issues, but it does allow for a much more top-down view of the map, which gives a better grasp of the geopolitical and strategic views than the narrower camera angle allows. While it may seem like a minor thing, the change in camera perspective can often give a change in strategic perspective, allowing the player a more traditional war game-esque view, allowing for a more nuanced appreciation of the distance between armies, cities, and enemies.

There is also an “extreme” version of this mod that is a bit more unstable but allows for a much farther drawback distance, but seeing as how cities and armies disappear or get obscured by clouds if you go too far up, the regular version works perfectly fine. 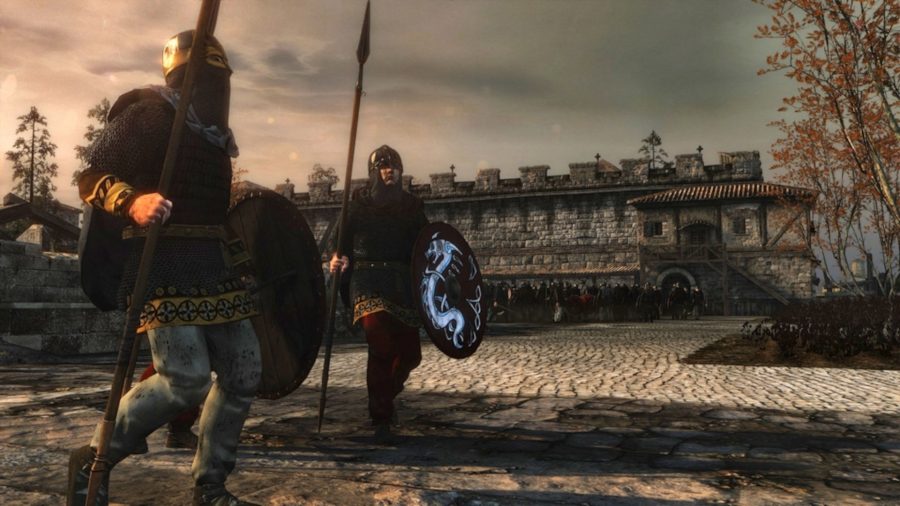 Much in the same way as the previous entry, this is a must-have quality of life improvement. This mod does the same thing as the Olympian Campaign Camera, but for tactical battles, rather than the campaign map. Freeing the camera from its unnecessarily narrow axis just feels liberating. Again, this doesn’t unshackle the camera completely, but does give the option to go back farther and get closer to the ground.

This allows you to really get into the dirt and see the fighting happening at ground level, or, alternatively, pan far out to get a more holistic view of the fighting below. Don’t settle for the camera-on-a-dolly-like limitations that Creative Assembly has given you. 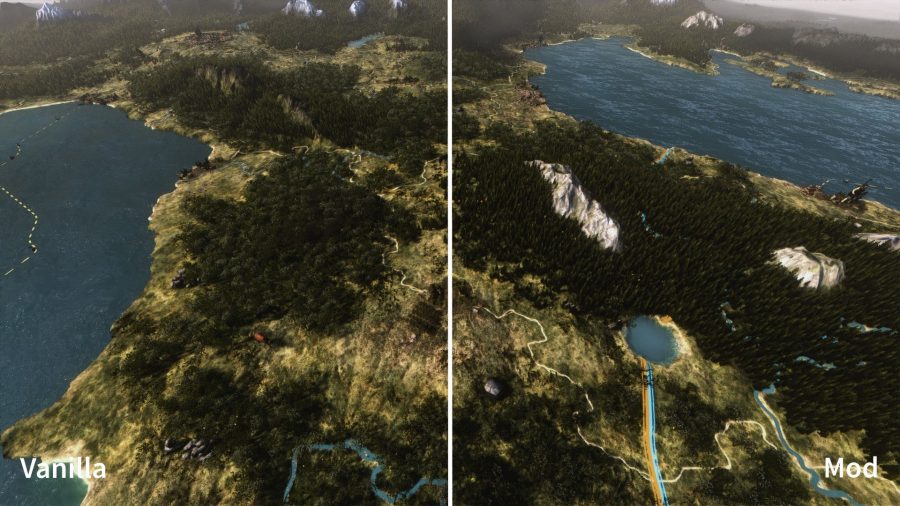 One of my biggest grievances with the Total War series in general is that the lines between provinces aren’t always clear at a glance. This mod gives some clarity by making the barriers between each province just a little bit bolder. This makes it easier to see where each province begins and ends and  makes visualizing the political boundaries of your territory much easier to recognize while also maintaining the maps well-crafted geographic features.

I find this works especially well paired with the Olympian Campaign Camera, allowing for a bird’s-eye view that also makes the individual provinces more clearly delineated. I strongly believe that the visualization of a strategic problem heavily contributes to how we perceive and solve them. In this respect, Campaign Borders is another must-have quality of life improvement, that while only altering the games visuals in a subtle way, makes a huge difference in how, at a glance, a player understands a situation politically, geographically, and strategically. 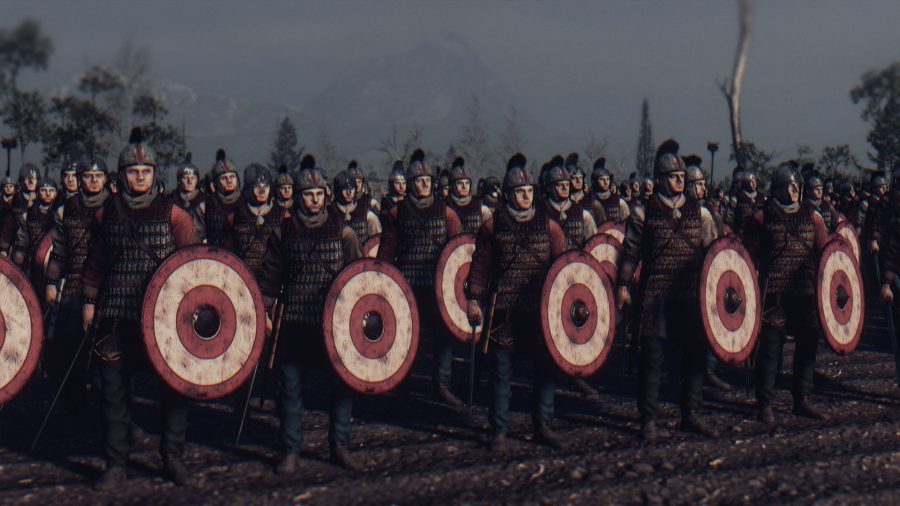 The Romani unit pack greatly expands upon the number and variety of Roman units, adding a total of 104(!) units for the Western, Eastern, and Expeditionary (from The Last Roman DLC) Roman factions. If you’re going to be playing a run of any Roman faction, it makes sense to go all in and use the much more fleshed out unit rosters available from this mod.

Especially when playing as the Western Empire, this mod adds a degree of flavour that makes the struggle to hold out even more worthwhile, as you can admire the craftsmanship and research that went into making and detailing the unit models for this pack. Watch out if you’re using another unit pack or overhaul mod, as they might not be compatible with Romani. 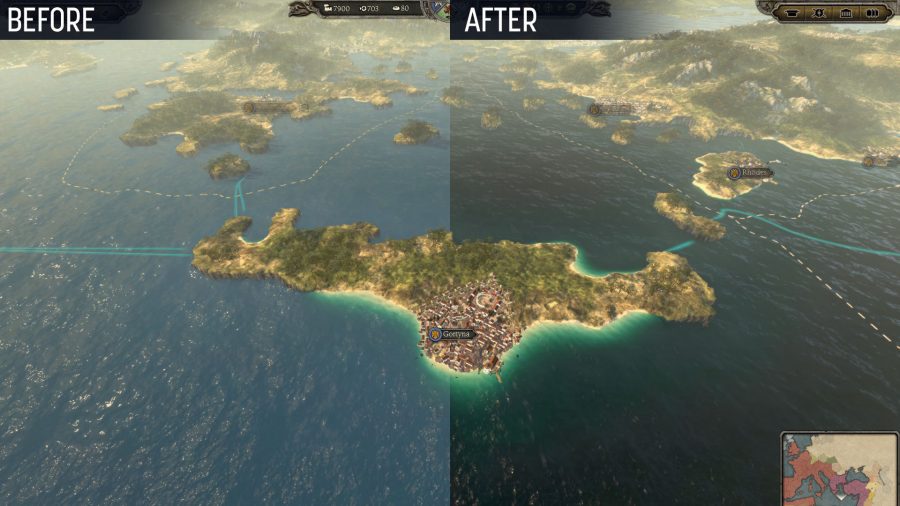 Look, bland looking water graphics aren’t going to make or break your experience, but ask yourself: why shouldn’t I have nice things? So treat yourself, toss out that plain, old, regular water and get some fancy new Natural Water from this mod.

I’ve always believed that style, rather than mere quality should determine how to feel about visuals, and this mod actually delivers in that respect, replacing the perfectly adequate water of the base game with a variety of subtly different colours for each region — from the dark blue hues of the North Sea to the crystalline aquamarine of the Mediterranean. It’s a minor thing, but it makes the experience just a bit more visually appealing. 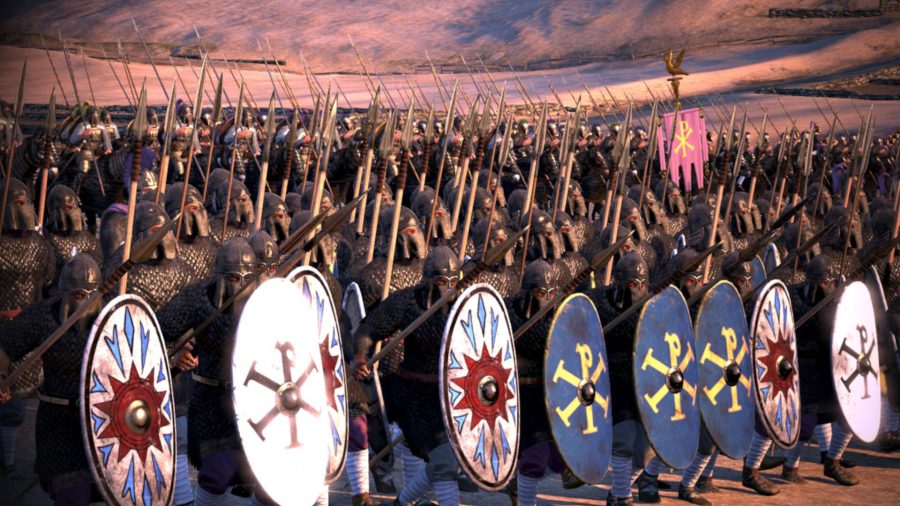 This alternate history total conversion mod posits a world in which the assassination of the Eastern Emperor and his heir just before the start date results in both halves of the Empire fracturing and splintering. Because of this, instead of two roman factions, East and West, Rome is divided into two loose hegemonic spheres based out of Ravenna and Constantinople with virtually autonomous warlords ruling the provinces.

In game terms, this means that while in the west Honorius may still sit in Ravenna and claim the title of Augustus, the provinces of Gaul, Hispania, Britannia, Illyria, and Germania are client states, outside the direct control of the Emperor, while Africa and its ever precious grain supply is being run as an independent kingdom under a Roman general. In the East, former Praetorian Prefect and true-power-behind-the-throne Flavius Rufinus has taken the purple, but his realm is as rife with rebellion and warlords as the west. Constantinople, the new Rome, once the rich and geographically defensible bulwark of the Roman world, now faces a similarly dire position as the old Rome.

As such, Terminus Total War – Imperium adds a wealth of new Roman factions, with all of the accompanying internal struggle, while also having the same apocalyptic threat of Germanic and Hunnic invasions. In some ways, this alternate timeline interestingly mirrors the political circumstances that faced Rome during the Crisis of the Third Century when, surrounded by the dual threats of the Goths and the Sassanids, the Empire effectively splintered and a Gallic Empire in the west and a Palmyrene Empire in the east emerged which could more robustly defend their own territories, while the central empire schemed to regain supremacy over the wayward provinces.

While the situation is still very dire for the Romans in Imperium, the more fragmented political authority does at least offer the intriguing possibility of embracing a more effective defensive strategy through delegating out the defence of the Empire. This, alongside a series of kingdom formation missions and a new war weariness system, make for a very enjoyable romp through a thoroughly enjoyable alternate historical timeline.