It’s impossible to overstate how enjoyable RTS games can be. There are few things as satisfying as building up an immense army and simply washing over your foes like a river over stones, erasing their existence as effortlessly as a mouse click.

The genre has suffered something of a lull in recent years, but we’re seeing signs of a resurgence. Indie games stand out like Tooth and Tail, Northgard, and A.I. War 2 have shown there’s plenty of angles to explore. While the upcoming Age of Empires 4 release date will hopefully introduce a new generation of gamers to the joys and frustrations of the RTS genre.

While the rise of MOBAs has challenged the RTS scene quite significantly over the past decade, this hasn’t stopped some worthy games rising to the top ranks to earn their own place the hall of fame. Here’s our take on the best RTS games on PC, though we’re skewing more towards newer releases because, honestly, we all know how good Homeworld is by now. If you’re looking for a broader list of the best strategy games then we’ve got a separate list for that – this one’s all about real-time, where you can’t hide behind the safety of turn-based strategy mechanics.

The best RTS games on PC are: 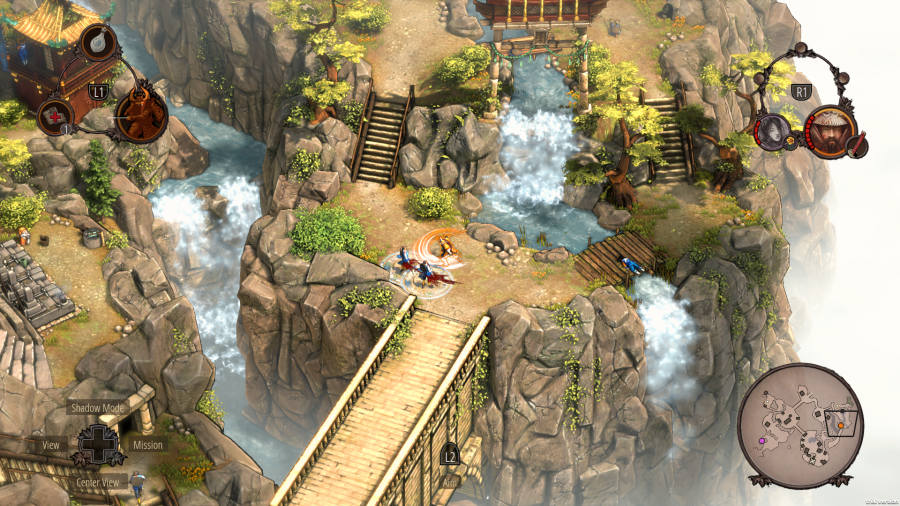 Shadow Tactics: Blade of the Shogun

Shadow Tactics: Blade of the Shogun is one of the best examples of modern RTS games. You don’t control vast armies with innumerable units, but instead, you guide an elite group of five characters, all of whom have different skills and strengths. While it does fit into the RTS genre, it also owes a debt to stealth games, meaning you have to be very careful when making decisions – your crew are skilled killers, but they’re no match for a fort full of samurai.

It’s a neat twist on real-time strategy, with each new level of the campaign presenting you with a new stealth puzzle to solve using your five very different soldiers. Will you deploy your lethal marksman to clear the path from afar, use your master of disguise to slip through unchecked, silently slay with your ninja, clear out small groups with your samurai, or use traps and decoys to sow chaos? Sometimes it’s the wealth of options at your disposal that makes things challenging. Regardless, every win will leave you feeling like a strategic ninja as your foes lie crumpled behind you. 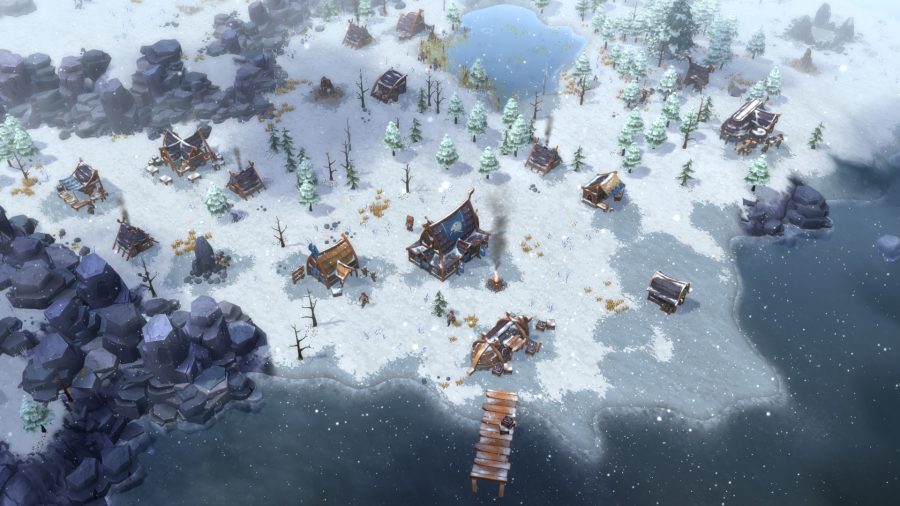 This innovative RTS game arrived on our strategy shores mid-2018 after a stint in Early Access, and has been occupying its own quiet corner of the genre ever since in a very stoic and extremely competent manner. Set in a fictional world, each match of Northgard puts you as newcomers to an island that you need to explore and expand into in order to build a new life for your people.

More like this: The best Viking games on PC

You don’t build buildings and recruit units – instead you must assign your limited population to various ‘jobs’ which are enabled via buildings. The game can be quite hands-off in many respects, with even combat following a guidance model vs. direct control. You won’t be alone on the island either, there will others also seeking new homes for themselves. Each ‘clan’ of Vikings has unique mechanics and distinct playstyles; some prefer to form alliances, while others like to conquer. Others just want to make money, maybe summon a kraken.

There are multiple routes to victory, and every island is procedurally generated and filled with mysterious and NPC monsters to contend with. There’s also a survival element as you need to ensure you have enough food and supplies to see yourself through the ‘Winter’ phases. The game has some paid add-ins in the form of new clans, but most of the game updates – which have included several new game modes – have been completely free. Definitely one to check out! 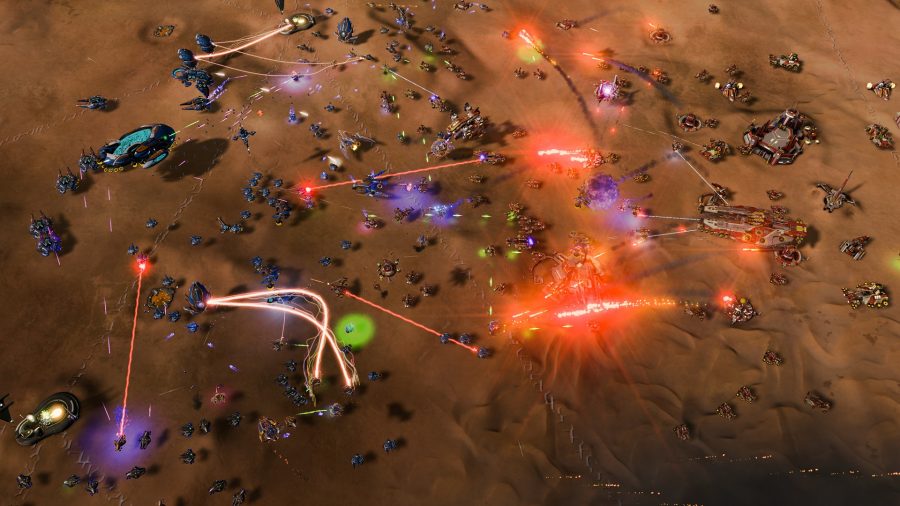 Ashes of the Singularity: Escalation

While it is undeniable that Ashes of the Singularity launched in a pretty weird place, with a somewhat characterless campaign and what felt like a dearth of unit options, it’s matured in a big way via a long cycle of continued development and optimisation. It now stands as one of the more interesting takes on large-scale RTS that exists in the modern time.

Ashes of the Singularity takes nods from Total Annihilation-style games, but also from Company of Heroes with its squad-based light vehicles, and interconnected resource nodes which function similarly in many respects to territories from Relic’s seminal World War 2 RTS. It uses structure-based support powers similar to those found in Command and Conquer 3, and constrains player upgrades and unit counts through the scarce Quanta resource (which is also used to activate support powers). The campaign DLC has vastly improved in quality, and while the game’s specifications make it difficult to run on all but higher-end machines, Ashes is shaping up to be a serious contender in the large-scale RTS space. 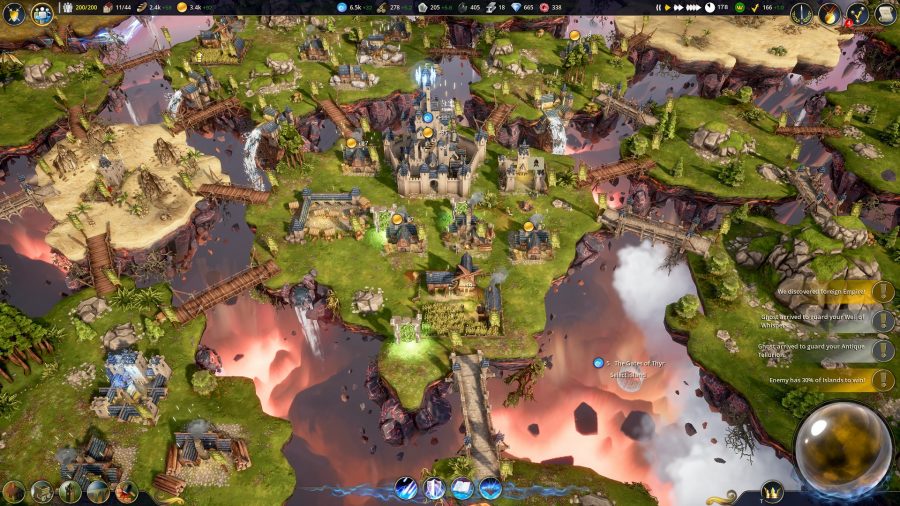 It’s nice to see a new face finally make it onto this list – Driftland was in Early Access for a couple of years before it finally released in April 2019, and it seems that time has been put to good use. This is an innovative RTS that follows in the mould of the classic Majesty franchise – where indirect control is the order of the day. You are a mage whose realm is on one of many shattered pieces of the world floating around, and you must develop your holdings and expand onto other ones by connecting them together.

It’s not for everyone, and there are some other minor niggles that will need to get worked out over time, but Driftland willingness to be bold and experiment does it justice, and anyone looking for a new fantasy RTS game need look no further. 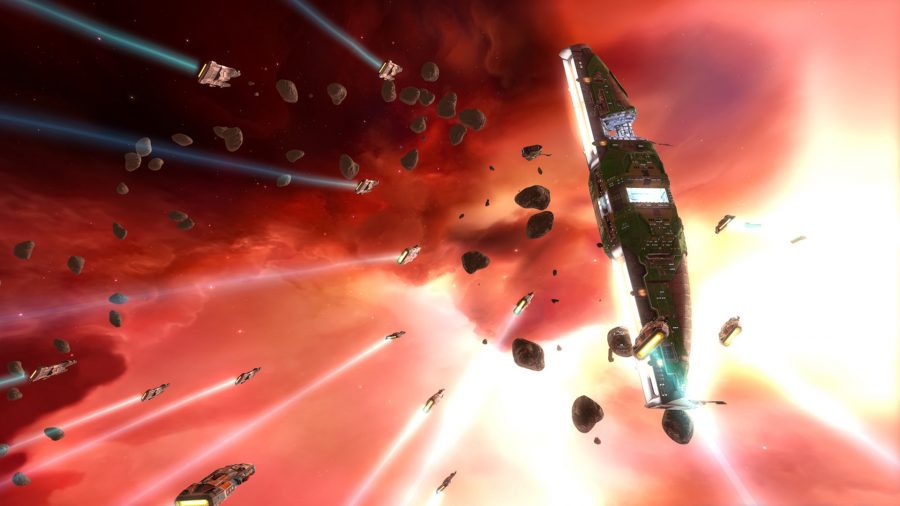 We all love good space games. Homeworld, unlike the also excellent spinoff ‘Homeworld: Deserts of Kharak’, is actually set entirely in the inky black of space itself. You have well over 100 different space ships to choose from and you can also customise formations and flight tactics for different situations, allowing you to create unique strategies to take over the void with.

That’s all well and good, but the main draw for Homeworld is that its grand space battles look stunning. Hundreds of vessels lighting the sky up with laser fire against a fuchsia sunset – you’ll be spending more time spamming the screenshot key than your left mouse button. It helps that the best way to buy this is the Homeworld Remastered Collection, which includes a bunch of content from Homeworld 2 in its multiplayer modes. 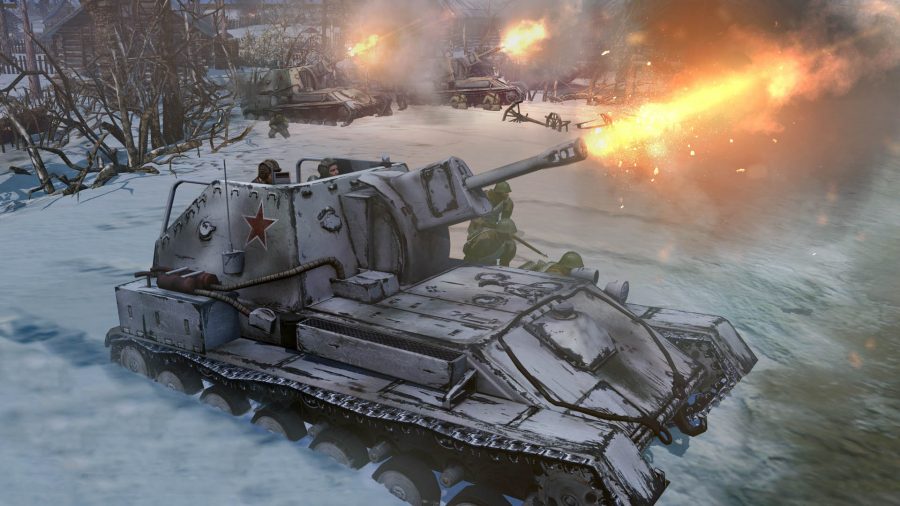 Company of Heroes 2 has a reputation that precedes it, but one that it easily lives up to. Set amongst the horrors of World War 2, the campaign has you taking on battles across multiple theatres of wars and in some of the most famous battles of the bloody conflict. Few games manage to strike such delicate balance between conveying the vast destructive scale of the Second World War while still depicting the horrific intimacy of close-quarters firefights. Watching a squad of soldiers being gradually encircled and picked off one-by-one is downright unsettling.

While it’s taken the Ardennes Assault expansion and years of balancing updates for CoH 2 to reach this point, it’s now regarded as not just one of the best RTS games ever made, but also one of the finest WW2 games. The afore-mentioned expansion, by the way, represents one of the finest single-player RTS experiences you can take part in. 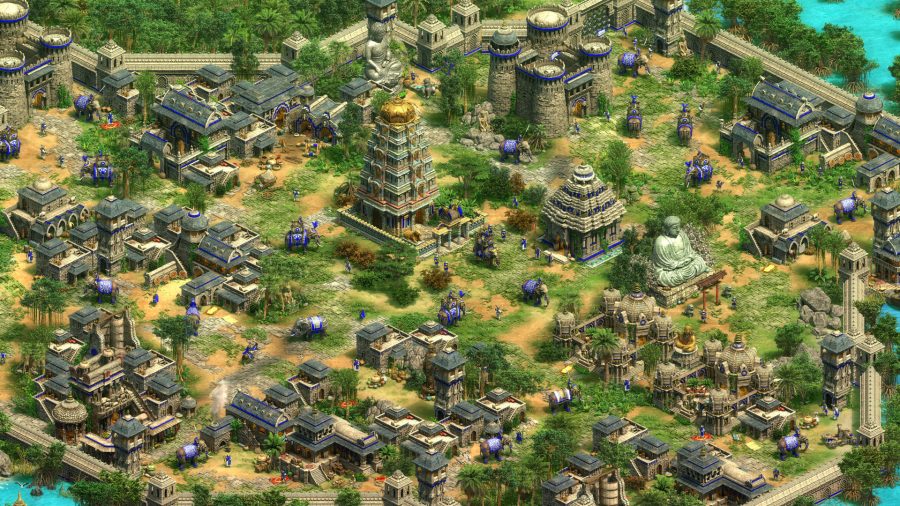 The original Age of Empires 2 is, undoubtedly, a high point in the world of RTS games – so much so that it has now been fully remastered and released. The combination of units, tech research, and wololoing, all combine to create one of the most replayable RTS games around. The Definitive Edition verges on a remake, updating not just the art, but also unit AI, not to mention the fact that it boasts new campaigns and a handful of fresh civilisations.

AoE 2 has a sumptuous mix of combat, civ development, construction, and resource-gathering that means you’re always busy clicking away on something. Combat is more developed than two sides hacking away at one another until one or two lucky warriors emerge uscathed – there are fortifications to navigate, siege tactics to employ, and all sorts of logistical nightmares that can cause your costly assault to crumble. 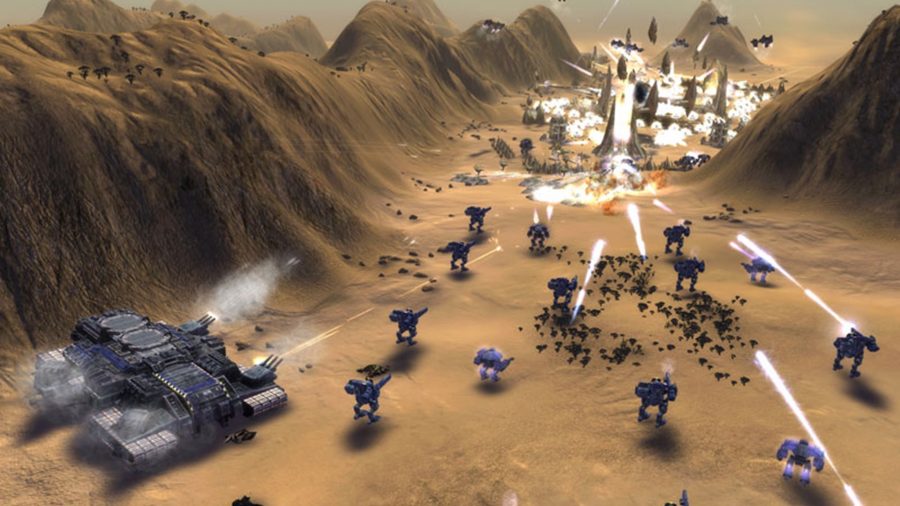 Set amongst a big old war known as The Infinite War, Supreme Commander has you attempting to wrangle peace out of the chaos that the galaxy has known for so long. You’ll have to use every last brain cell to come out on top against the AI and the devastating weapons they wield.

Thankfully, they aren’t the only ones capable of bringing out the big guns. There are huge tech trees for you to plough through over the course of a campaign, but the highlight is the experimental branch of units, which include everything from giant crab-like walkers to mobile first bases, and nuclear payloads capable of instantly destroying major enemy bases. Supreme Commander also features one of the coolest map systems around, with the ability to zoom out and in seamlessly so you can always plan your next step. Few RTS games manage to make sci-fi warfare look and feel as impressive as Supreme Commander, and over a decade later it’s still the benchmark in that respect. 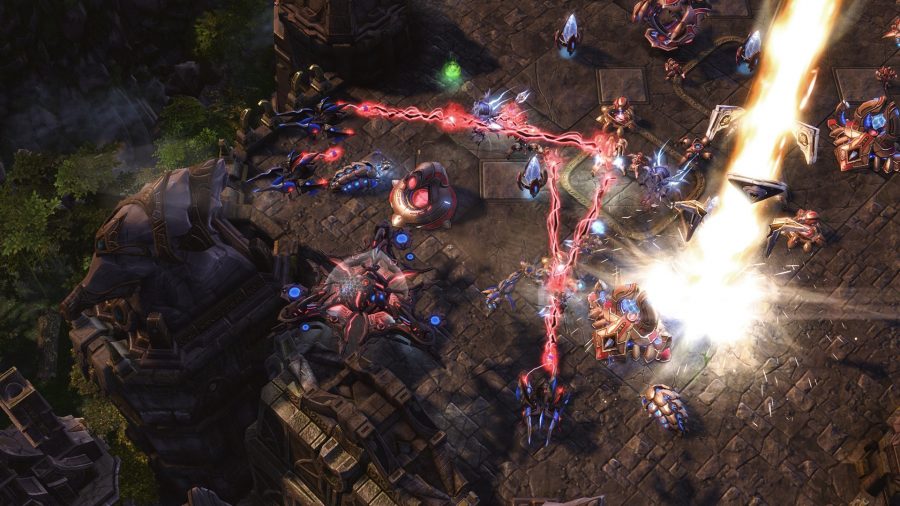 Starcraft 2 is a titan of the RTS genre. One so monolithic that many new players fear to even pick up the game because they’ll probably get torn apart online before figuring out the camera controls. Constant research and development choices will daunt the indecisive among you, but there’s untold freedom of choice whether you’re playing as Zerg or Protoss. As a new player you’ll be constantly weighing up whether to invest in permanent upgrades, short-term buffs to your most powerful units, or new units like giant robo-dogs – who doesn’t want those?

But it’s multiplayer where Blizzard’s balancing prowess really shines, a feat that’s reflected in the game’s impressive esports leacy. Winning is a constant, tireless struggle to try and outwit your opponent, scouting out their facilities, and attempting to counter it. Simply put: Starcraft 2 does everything an RTS game should do, but with a level of polish that is still hard to match nearly a decade later. 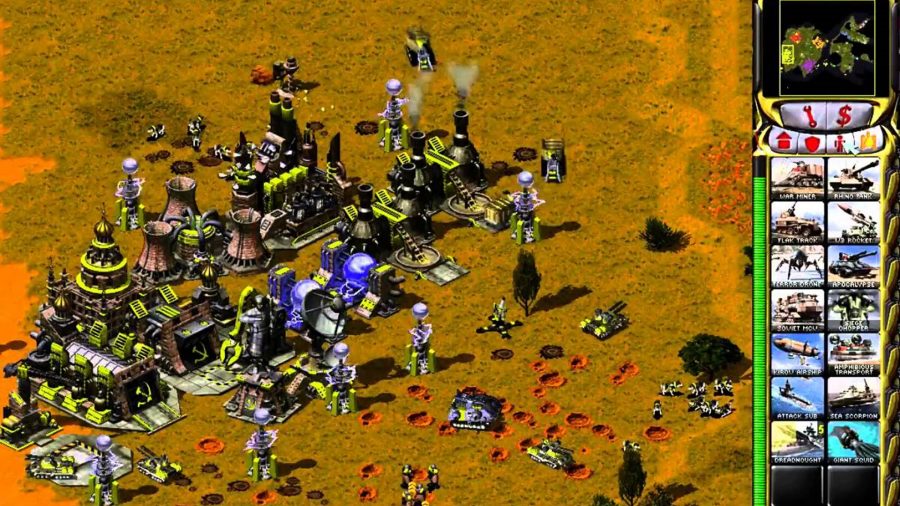 Command & Conquer: Red Alert 2 signifies the pinnacle of an RTS series that sadly hasn’t received a fully-fledged sequel since Red Alert 3 in 2008 – we’re not including the poorly received mobile spinoff.

So what makes C&C: Red Alert 2 so special? Few RTS games are as ‘out there’ as the Red Alert series. You can start battles between trained bottlenose dolphins and Soviet giant squid, or create Chrono Rifts to phase areas and units out of time, rendering them useless. It’s an intensely silly game packed with FMV cutscenes and countless Tim Curry quotes. 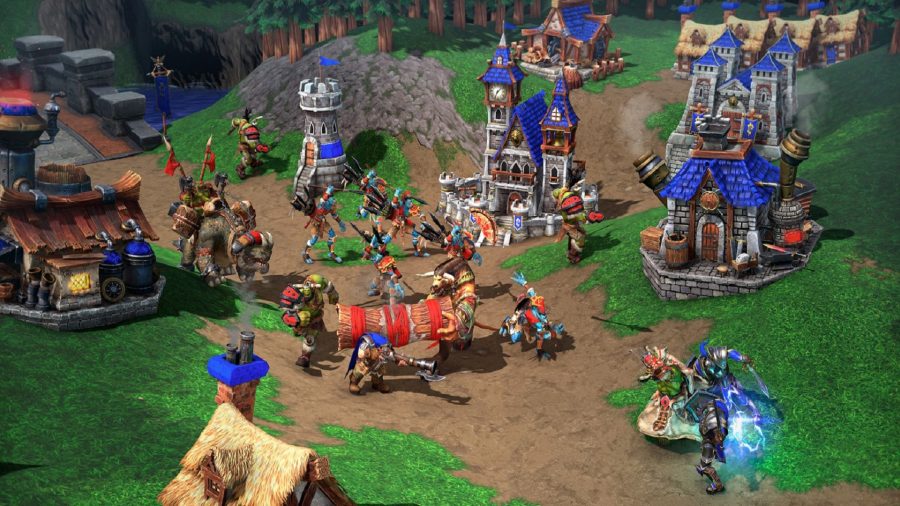 Warcraft 3 is one of the best-loved RTS games of all time, it’s fanbase is extremely fond of it, and there’s a good reason for that adoration. It introduced the world to creeps, the computer-controlled units you can find across some maps, and undoubtedly laid down the groundwork for other genres and games to come after it. You could even level-up your heroes to make them stronger, making it one of the best instances of RPG meets RTS in gaming.

The classic version is great, but while there is a recent remaster in the form of Warcraft III: Reforged, a number of bugs, some miscommunication about how far the remaster goes, and the new launcher blocking some of the original’s features have left a sour taste in the mouths of fans.