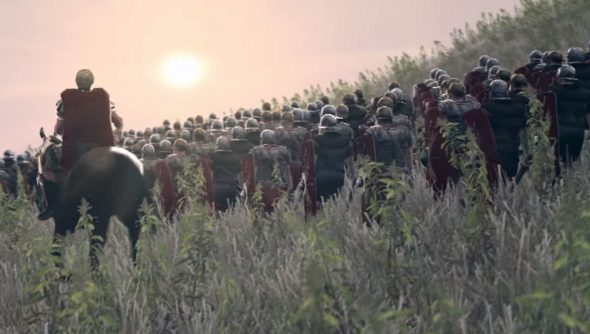 When Total War: Rome II launched last year, it had big sandals to fill. It came after the most polished, focused Total War game, Shogun II, and was the sequel to what is probably the most fondly remembered installment in the series, the original Rome. Ultimately, it did not live up to expectations.

While the combat was spectacular, huge swathes of the game were bogged down by poorly implemented features like the politics system, and the turn based campaign was painfully slow and dreadfully dull. One year on, though, much has changed.

A slew of patches and updates culminating in the launch of the Emperor Edition last month have revitalised the game. A massive new campaign, a plethora of tweaks and broad, sweeping alterations necessitate a second look. It’s time to reinstall Rome II.

The Emperor Edition has replaced the regular game, and if you already owned Rome II, the upgrade is a free one. It collects all the free DLC, including the additional factions and Twitch support, along with changes to the politics system, real-time battles and construction.

It is an absurdly large update.

Of course, the most notable extra limb that has sprung from Rome II’s torso is the new campaign: Imperator Augustus. It covers Octavian’s rise to power after the death of his adoptive father, Julius Caesar and the period of the Second Triumvirate. It is, essentially, a second version of the Grand Campaign, spreading across the entirety of Rome II’s map.

It’s a time of civil war, with the Roman Republic splitting into four factions. Octavian controls Italy and Gaul, Marc Antony dominates Greece and has inroads into the Near East, Lepidus’s power extends across Spain and North Africa, while Pompey causes havoc throughout the Mediterranean from his power base in Sicily. Six more factions, including Armenia – now playable in the Grand Campaign as well – round out the list of potential player factions.

While the Grand Campaign lets players command Rome as one of several Patrician families, each with barely noticeable traits, Imperator Augustus makes each Roman faction significantly more distinct, almost to the point where they are as different as the foreign playable factions.

I started things off with Pompey. He’s a bit of an underdog, standing against the Second Triumvirate, his thoughts filled with vengeance after Caesar’s men murdered his father while in exile. His faction starts perilously close to Octavian, absent allies or wealth. What it does have, though, is the open sea to plunder. Pompey is essentially a pirate king.

The life of a pirate isn’t all fun and games, unfortunately. Pompey can’t piss off the other Roman factions at the start, because allied, they are far too strong. So placating one of them and attempting to create a division between his enemies is key. Building an economy on raiding is risky too. The defeat of a single fleet can spell the end of his ambitions.

Playing as Octavian, on the other hand, is an overwhelmingly different experience. This faction starts off with allies everywhere, from client states in Gaul, to the uneasy, tense “friendship” with Lepidus and Marc Antony. Octavian’s bloody loaded, too. Where fielding one big army can impoverish Pompey early on, Octavian can immediately build up three of them with his treasury barely noticing.

And everywhere are easy targets for expansion. Germanic tribes can be dealt with quickly at the point of a sword, while others beg to become client states, and even Octavian’s Roman colleagues present choice targets. With his long list of friends, few can face him alone early on.

The campaign also feels a lot more alive than its forebear. Factions start off with relationships that have already been developed – so there’s a lot more to do, with a more complex network of treaties and obligations. This goes a long way to improving the flow of the game. One of the most obvious flaws in the Grand Campaign was the number of turns that could go by with nothing happening at all. This is less of an issue with Imperator Augustus, because even when there aren’t any battles kicking off, diplomacy has more weight and greater intensity.

This is particularly noticeable with Pompey, who has potential enemies everywhere. Trying to befriend Marc Antony in the hopes of using him against Octavian is especially challenging, as his dislike for both Pompey and Octavian is almost equal. So there’s a lot of international political manoeuvring to be done.

Oddities still crop up, however. Most irritating is the repulsion factions have for the cultures of other factions. Everyone seems to be disgusted by everyone else, even when they are effectively the same culture. When two predominantly Latin cultures hate each other because of “cultural reasons”, it simply doesn’t make any sense.

Beyond the new campaign, more changes are apparent. Characters live a lot longer, and that’s one of the most welcome tweaks. Previously, generals would simply die off at an alarming rate, making all the work that had gone into developing them and making them more powerful feel like a gigantic waste of time. Creative Assembly says that characters should live about 20 years longer in the Grand Campaign, and that does seem to be the case.

I wish I could say that the politics system had become fun, but frankly it’s still a bit rubbish. It continues to just be random decisions with random outcomes, and horribly arbitrary. However, it’s better than it used to be. Civil wars are less common, even though they remain tied to a lot of random factors. More effort has been made to make the system more meaningful, as well. For instance, how much support a faction has determines large faction wide bonuses or penalties, integrating it into the game a lot more. 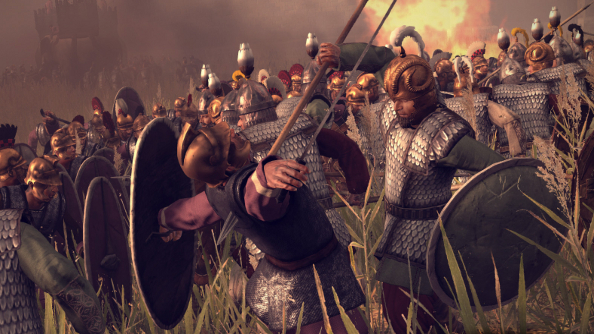 Pacing, which I mentioned was improved with the Imperator Augustus campaign, is likewise improved in the Grand Campaign thanks to more options when not dealing with lots of lovely battles. Building and resource chains have been altered to provide more obvious lines of advancement with larger bonuses, and there are simply more things to build so that each turn, it feels like there’s more to do. Even more welcome is the turn speed, which seems to have been dramatically improved so that there’s no waiting around for five minutes for many AI factions to finish their turns.

Rome II is really all about war, not politics or construction, though, and on that front things are looking very good. AI, while still a bit wonky from time to time, isn’t quite as suicidal or inexplicable as it was before. The make-up of enemy armies is considerably more sensible, for one, and is just as varied and well thought out as player-created ones. This makes for much closer battles, and makes large armies feel like genuine threats.

There is barely a single aspect of Rome II that hasn’t been considered and altered in some way, usually for the better. Some changes are subtle and not immediately obvious, but together they craft a more polished, thoughful strategy game. The biggest ones impact the turn-based campaign map, and that’s really where Rome II was at its most flawed at launch. I still don’t think it’s ever going to reach the heights of Shogun II, which was the series at its absolute best on all counts, but that does not negate the fact that this is a much better version of the game than it was when I first played it last year.