I am Hector, and I want a rematch. My first battle with Achilles on hard mode has just ended in a thorough defeat – most of my army is classed as heavy, and it’s a real challenge to avoid being flanked by Achilles’s rapid chariots, centaurs, and light infantry. He envelops me with ease and most of my units simply lose their matchups. Homer’s script in the Iliad plays out once again.

In my second attempt I spread out a little more in deployment and hold more units in reserve, enabling me to counter-charge when the centaurs and Thessalians flank me again. I make better use of my archers in the missile exchange with Achilles’ javelins, and of Hector’s hero abilities to bolster my troops in the centre. I shamelessly have the Minotaur help him take down Achilles to get him out of the way early – no need for a heroic 1v1, thank you, we know how that turns out.

Hector still manages to die – worn down by Achilles’ Myrmidons – but by then they’re fighting a losing battle. The Minotaur’s morale-crushing beastly roar is decisive in breaking what remains of Achilles’ army, and then it’s a matter of repeatedly charging the unbreakable Myrmidons with what I have remaining until they’re slain to the last man.

I am playing a demo based on the battle we saw at Gamescom almost a year ago, when A Total War Saga: Troy was first announced – the one where Achilles challenges Hector at the gates of Troy. Both heroes are playable, and each has two difficulties. I attempted them all multiple times. 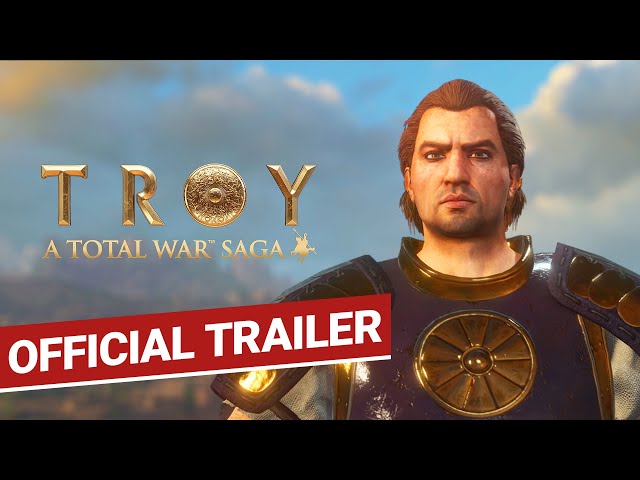 Impressions so far: it’s different – a Total War Saga: Troy will certainly have a feel all its own. Drawing on the realities of warfare in the Bronze Age, Troy’s battles are almost entirely between infantry. Achilles gets some heavy chariots and some ‘centaurs’ – one of the game’s mythic units, depicted as very accomplished cavalry who ‘appear as one’ with their horses as the game seeks to find the ‘truth behind the myth’ – but otherwise every unit is two-legged.

Naturally this requires that infantry is more specialised than ever, and squeezed into battlefield roles that cavalry would otherwise occupy. The introduction of three weight classes is the most obvious way in which this is done: light infantry are used for flanking and outmanoeuvring your opponent and can move almost twice as fast as the slower but tougher heavy infantry, while Goldilocks cosplayers will naturally have the option of medium infantry, too. But Creative Assembly – specifically, its new Sofia studio – has gone way further than this. 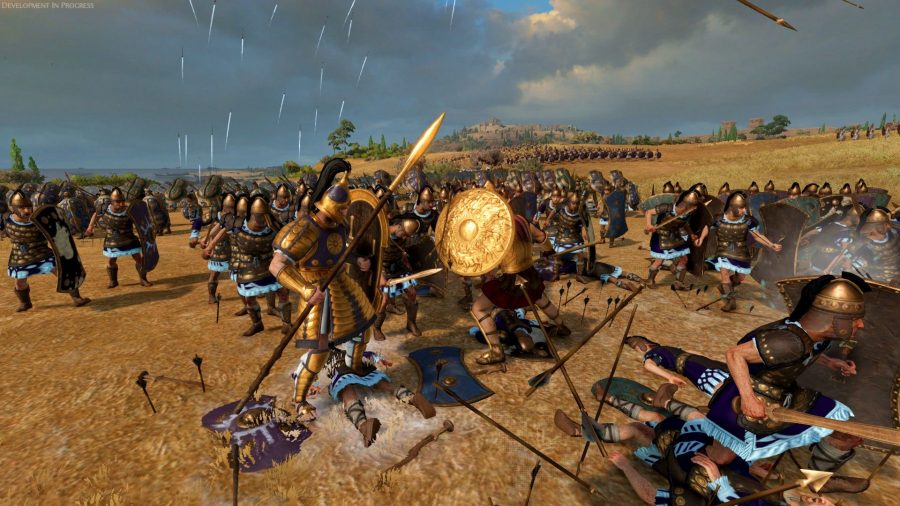 Elites in every specialism have aggressively skewed stats and brand new traits to further accentuate their roles. Achilles’s Myrmidons – which come in both spear and sword flavours – have very high damage and can pierce armour, but are also specifically identified as excellent flankers. Hector’s Champions of Troy are immune to psychology, give morale buffs to nearby allies, and have excellent defence, as well as getting a special missile weapon that’s ideal to throw at charging enemies. (We hear from senior game designer Milcho Vasilev that Odysseus will specialise in such weapons, too, with even his starting units able to throw precursor javelins before engaging in melee.)

Heroes are impactful - Hector is my biggest problem, healing and buffing his army to negate the shock of my charges

All these elites are also unbreakable and so must be destroyed to the last man. Easy mode packs your army with them – it’s pretty fun to feel how overpowered they all are – while hard mode gives at least three to your opponent. This has me slightly worried that CA is seeking to disrupt the Total War battle formula by simply having some units ignore its fundamental systems, though Vasilev assures me that “very, very few units have abilities that are that powerful,” that they’ll take a lot of investment to unlock and field, and that balancing is still ongoing.

Where Hector’s army of heavy infantry, spears, and archers is excellent at holding ground, Achilles’ fast-moving and hard-hitting force requires much more active micromanagement – not just to outmanoeuvre the opponent and find the best charges, but to make the best use of cunning new unit abilities. Pelagic Thessalians and Thessalian Marines are medium and light infantry with two-handed spears, again with strong flanking and charges, but who can also stalk, moving unseen in any terrain. 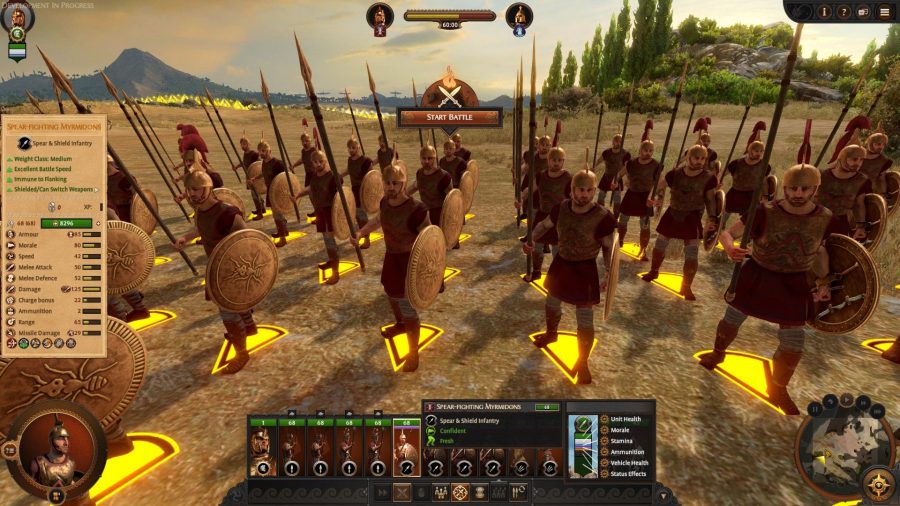 In my first attempt I am defeated. The opposing Hector AI is highly aggressive, shutting down my own space to manoeuvre, and besides getting several unbreakable units that require constant cycle-charging to wear down, is very good at using Hector’s hero abilities.

For these, think Warhammer but without the flashy magic fireballs: Hector gets a range of buffs and heals for himself and allies, while Achilles is more aggressive, granting attack and damage buffs mainly to himself, or hampering enemy morale and melee defence. He can also force a target hero to fight him in a one-on-one challenge – beyond this, there’s no equivalent of Three Kingdoms’ dueling mechanic, though there are some sweet duel animations if heroes find themselves fighting one another organically (these include a version of Brad Pitt’s jumping attack from the 2004 Troy movie). These abilities cost Rage, a currency that builds up as heroes fight. 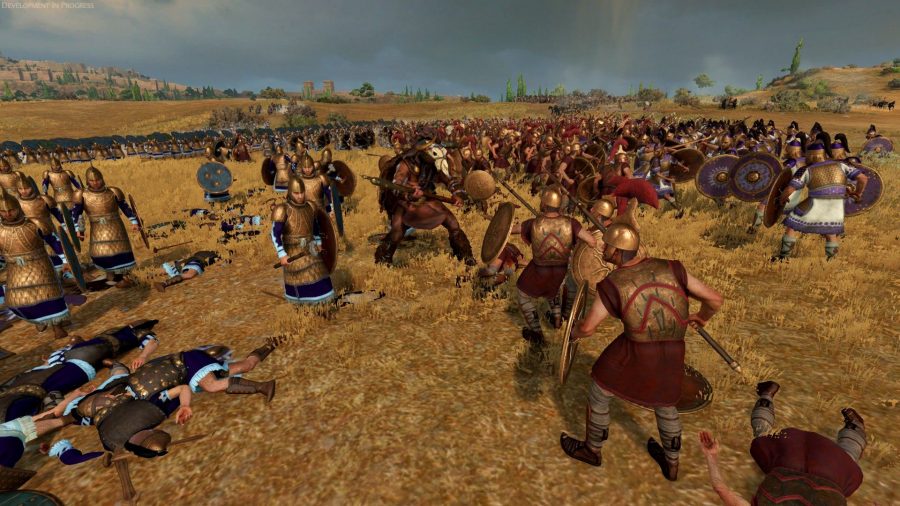 Heroes are pretty impactful, as the Minotaur’s decisive charge in my Hector game proves. As Achilles, I conclude that Hector is actually my single biggest problem – he’s healed and buffed his army throughout the battle, and provided a constant leadership boost that negates the shock of my charges. I have another go and use Achilles’ Divine Challenge to get him into repeated 1v1s. I do eventually take him down this way, but it takes ages, during which time he’s continued his army boosting shenanigans. And Achilles soon follows him to the afterlife anyway. A much closer defeat, but a defeat nonetheless.

A few footnotes. Battle pacing is a touch slower than in Total War: Warhammer; the easy mode cakewalks take less than five minutes, while the more evenly matched hard battles take between nine and 12 minutes. The additions of long grass and mud didn’t particularly affect the battle I played, but will enable CA to add further wrinkles to infantry combat. With this demo, CA has done a good job showing how it intends to diversify infantry tactics in two very clear, contrasting playstyles. 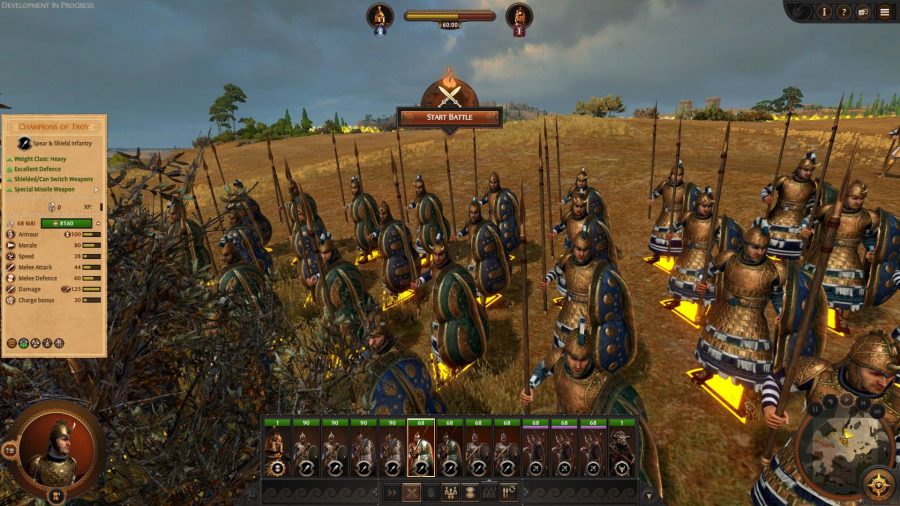 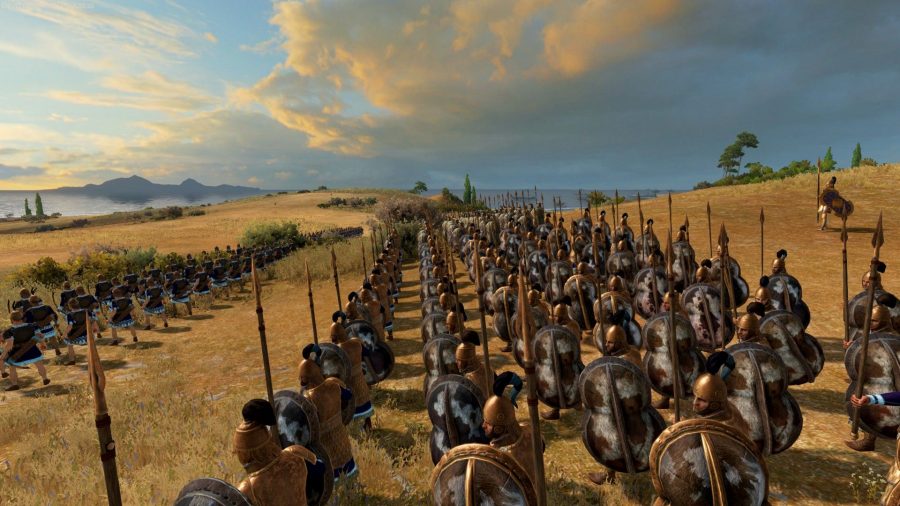 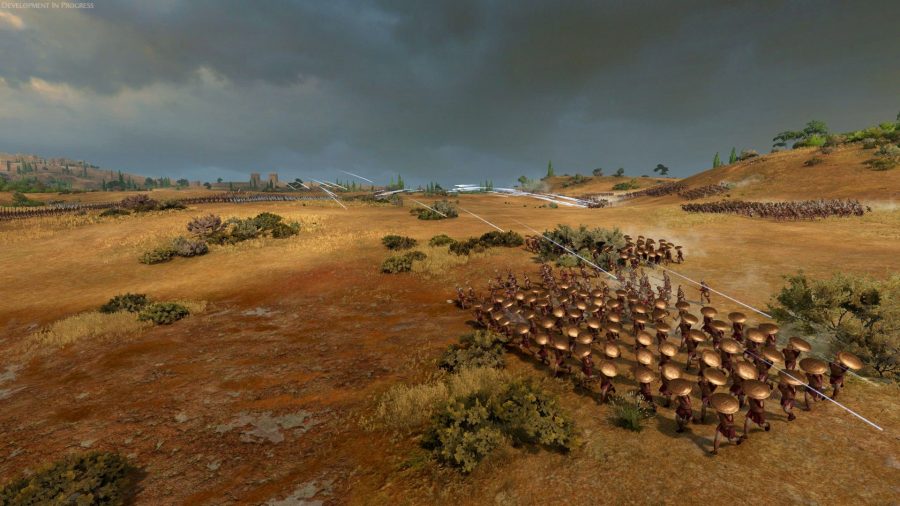 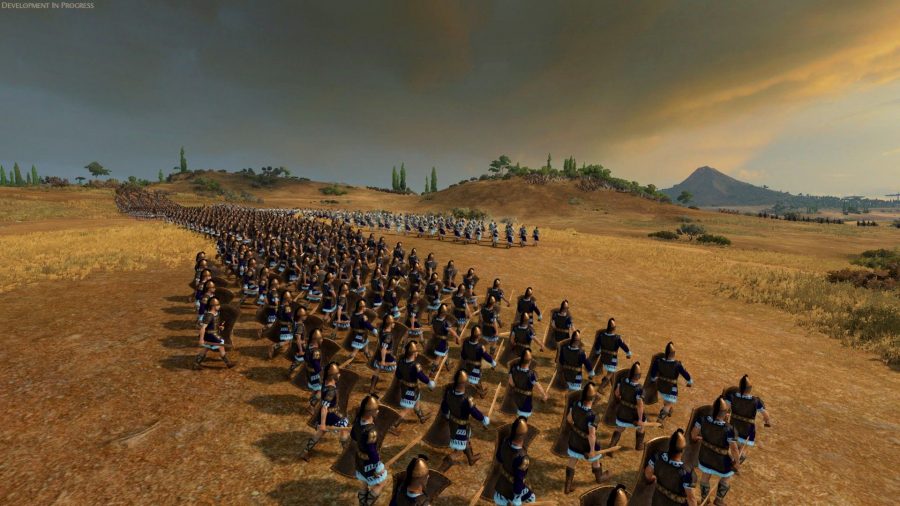 But as welcome as it’s been to get to grips with Troy’s battles, I’m ready to hear more about the campaign now. Troy is making some properly big changes here, such as the move to a mixed-resource economy and the inclusion of the gods, and apart from a brief flyover video, we’ve seen little of this side of the game since Troy was first announced at Gamescom 2019.

A Total War Saga: Troy will release on August 13. It’ll be a one-year Epic exclusive, but it’ll also be free to download and keep on launch day, which is pretty awesome.