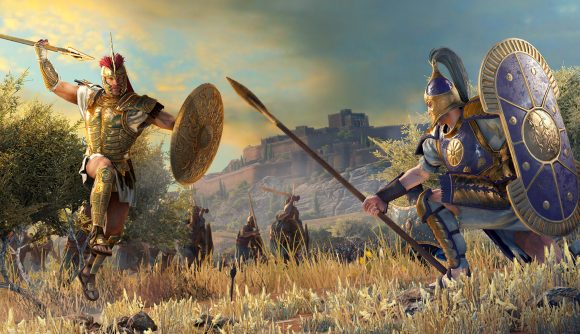 Most Total War games have featured a twist late in the campaign that forces your attention on some sort of endgame challenge – usually something that you haven’t dealt with before. But A Total War Saga: Troy gameplay will offer something a bit different, as your endgame opponent will step up from the factions already on the map.

“We are implementing an endgame escalation in which the game appoints a suitable adversary to serve as an endgame boss,” game designer Todor Nikolov tells us. That adversary will change depending “on whether the player is following a normal flow, like from Greece to Troy, or whether they have betrayed their allies and are going against them. So it’s a new challenge to choose the most appropriate enemy for you to serve as your endgame boss.”

The selected faction will get buffed, “but more importantly we’re also making their AI behavior a bit more unpredictable. It’s supposed to react to what you do to a certain degree, and make plans of its own.” Creative Assembly plans to use a “bespoke interface” to indicate what your rival will be doing.

“For example: you’re Achilles, and Hector is your endgame adversary, your antagonist. You get this screen where you can see roughly what he’s planning, what his next action is going to be, and you have to adapt. You have to react appropriately. Most likely, you are going to want to provoke a certain kind of behaviour out of the AI.”

Nikolov says “obviously we wanted an endgame challenge that keeps the game interesting rather than it becoming a grind, and we took a look at every solution in Total War so far, including the map invasion in Warhammer and the realm divide in Shogun 2.” Troy’s system “sort of resembles the realm divide,” except that the focal point of your opposition will be a single character.

“We decided to make the AI behaviour a bit more unpredictable, a bit more varied, so you won’t see just endless doomstacks march against your cities, but some more subtle things, I hope,” Nikolov says with a wink.

Check out our full A Total War Saga: Troy interview for much more on what to expect from the series’ latest entry.