When Total War Saga: Troy came out last year, its approach to mythology divided opinion. Developer Creative Assembly Sofia used the concept of the “truth behind the myth” to ground Greek mythology’s weirdest and wildest tales in realism: Harpies became skirmishers dressed in bird feathers, the minotaur became a big bloke with a cow skull, and centaurs became men with horses instead of actual horse-men. It was an undeniably smart concept, but as I commented at the time: smart isn’t always fun.

That’s why Troy’s Mythos expansion has me excited. Going fully fantastical, Mythos not only creates a new mythological campaign with new versions of its creatures, it also adds three monsters of myth for players to track, capture, and put to work: Cerberus, the Lernaean Hydra, and the Archgriffin.

These monsters are more than just big recruitable beasties, though, and each has their own set of unique buildings, mechanics, and units. We’re talking about legendary, one-of-a-kind creatures after all, and there’s a price to pay if you want them and their followers to do your bidding. As this is a Total War game that price is, naturally, besting them in battle.

Mythic expeditions are a new feature in Mythos, a little like mini-odysseys where you can dispatch an army to hunt down one of the three legendary monsters. It’s the same text-based expedition mechanic that the Viking Sea Kings had in Thrones of Britannia, but CA Sofia has really found a home for it in Troy. 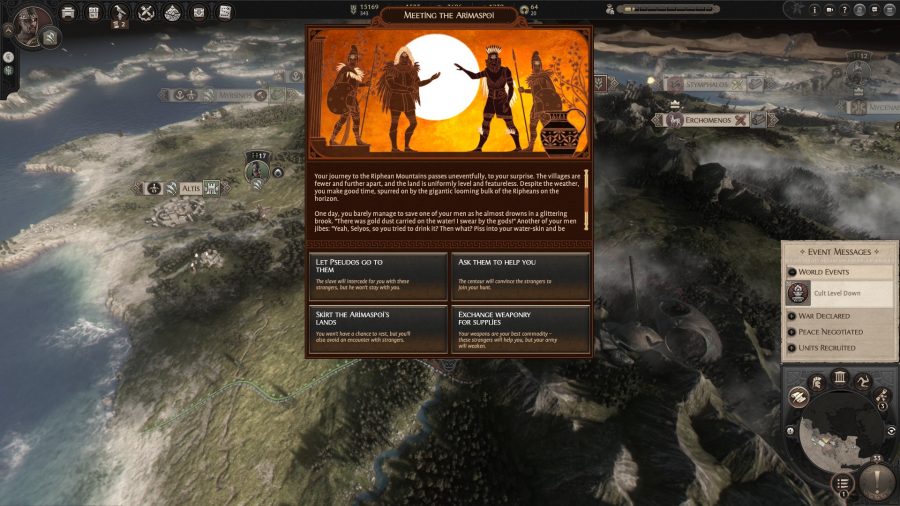 You’ll find yourself travelling through strange lands, making choices and recruiting monsters, before facing off against your quarry in a climactic final battle. Whether it’s fighting the Archgriffin atop an idyllic mountain eyrie, or battling Cerberus outside the gates of Hades, the maps for these epic encounters are impressive, and you’ll find yourself pushing back against overwhelming odds.

Mythos feels complimentary, and makes Troy what it should have been from the start

My only complaint with these expeditions is that when you reach the final battle you can also bring your main hero’s army, making the resource and troop management decisions during the expedition a bit pointless. In fact, it encourages you to use the cheapest units possible for your expedition, as you can just bring a powerful army for the finale.

As you can only chase a single monster per campaign, you’ll also never have a reason to make more than one expedition, which leaves the mechanic feeling a little underutilised. There was a part of me that wanted to fail just so I could try again, make different choices, and see other outcomes. But unlocking your chosen creature is really just the start of a Mythos campaign, and transforms the expedition tab into a summary of your monster’s mechanics. 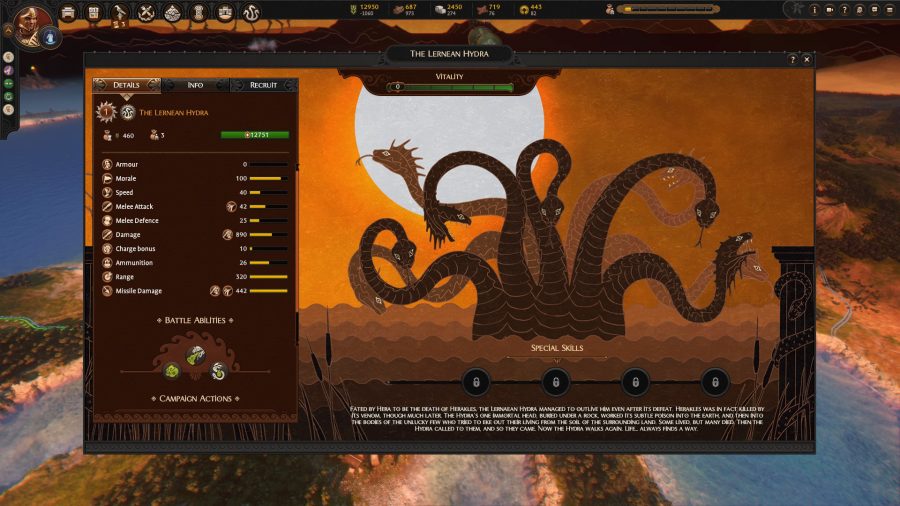 For example, Cerberus commands the Shades—denizens of Hades—which can be recruited using ‘souls’ – a unique currency. You can get souls by embedding Cerberus in an army and using its special post-battle abilities to harvest them, or you can build offering pits in your settlements. This lets you recruit the powerful undead legions for next-to-nothing.

Mythos also adds magical abilities to Troy, but while you can unleash tidal waves and cast down lightning from the sky, the best abilities belong to the Hydra Priest.

This pallid, venom-filled spellcaster can heal allies and cast poison clouds to weaken enemy units. He also has some top tier voice-acting.

The Archgriffin’s mechanics centre on choosing to favour griffins or the Arimaspoi—the cyclopean hunters who raid their nests for gold. Depending on what choices you make and what buildings you construct, you can stack benefits for either griffins or the Arimaspoi. Each creature also comes with a suite of battle abilities: the Archgriffin can blow away soldiers with a flap of its wings, and Cerberus can summon a pillar of fire to immolate enemies.

As your monster gains experience, you can choose to upgrade these abilities further, or strengthen its followers. These mechanics really help to ground each of the legendary creatures in their own myth, and make it more about choosing to align yourself and your campaign with one of them, fitting perfectly with the theme of mortals bargaining favour with supernatural beings that’s common in Greek mythology. 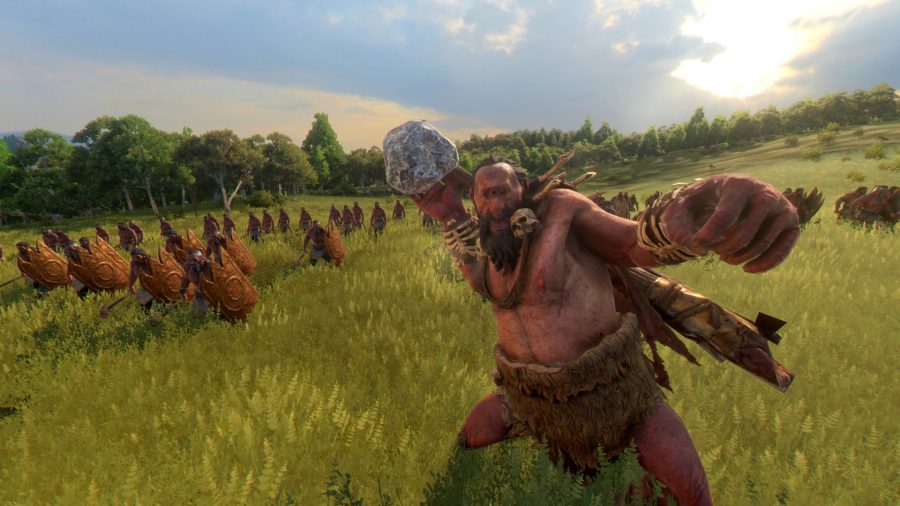 On top of this, you have the changes made to pre-existing mythical creatures. The cyclops isn’t just a guy with an elephant skull now, but a veritable one-eyed, boulder-chucking menace. The minotaur is now actually a minotaur, a proud cowman with a massive axe who will headbutt you as soon as look at you. The campaign map also has some tweaks to look more mythological, with sea monsters rising from the Aegean, harpies flapping over mysterious islands, and a few too many giant statues.

With Mythos, CA Sofia has done a fantastic job exploring the richness of Greek mythology and creating an approach to monsters that feels distinctly different from Total War: Warhammer. You’re not running around with a stack of 19 dragons – these mythical monsters are rare, they each have their own story, and even getting a single one of them to fight for you requires dedication, and a devil’s bargain.

That rarity makes them feel more powerful and valuable as a result. I wouldn’t say Mythos feels like a brand-new campaign, but it’s complementary and, more importantly, it makes Troy what it should have been from the start. 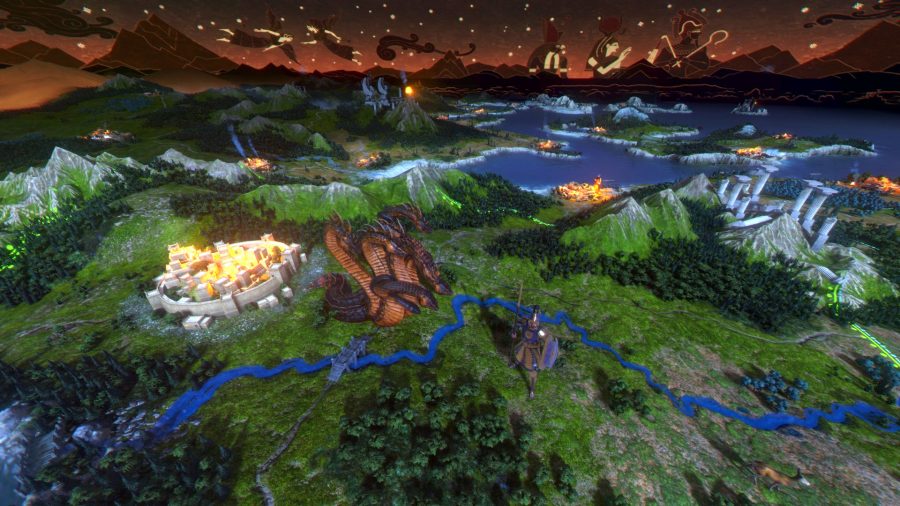 The overarching narrative of the Trojan War is intact, but now you can make Odysseus fight alongside a cyclops, give Hector an army of shielded giants to defend Troy, or ally Achilles with Cerberus as he shepherds souls into the afterlife.

It’s the perfect marriage of the Iliad’s fanciful storytelling and the mythological richness of its setting. Now all we need is flesh-eating horses.

Mythos is a fresh layer of paint for Troy, but also feels like the first step towards an exciting evolution for the Total War series.